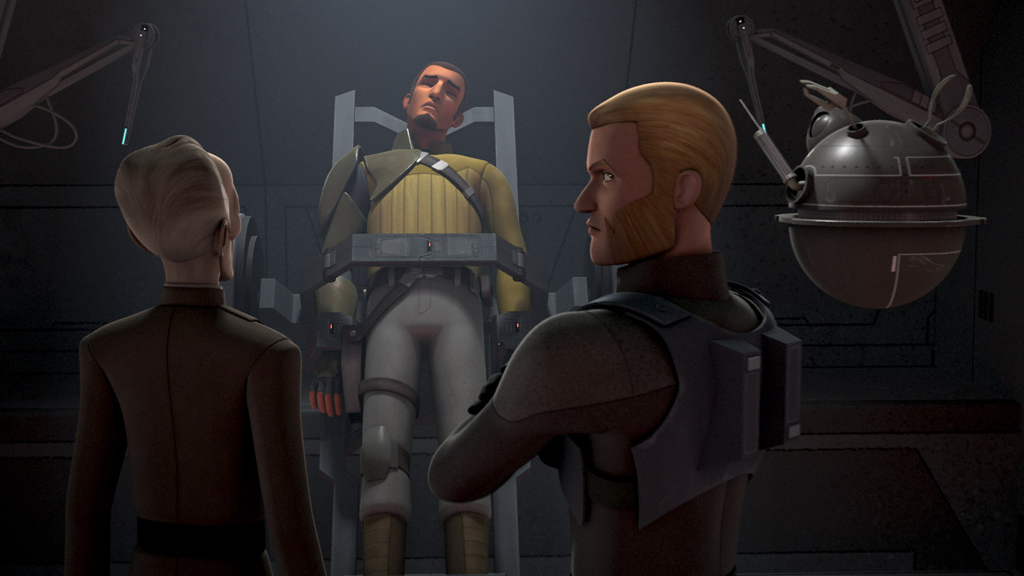 What is it ? : Kanan has been captured, and the rest of the team steal an AT-DP to use it's networked computers to find out where he is, however the destruction of the Communications tower at the end of the last episode has taken the entire Imperial network on Lothal down, so they escape having learnt nothing.
Meanwhile Tarkin is attempting to discover if Kanan is actually a Jedi, and after using an interrogator droid on him and finding out nothing he hands control of the interrogation over to the Inquisitor, who says that while Jedi are trained to resist interrogation, pain still works, and begins electrifying Kanan as a means of torturing him. He later wonders if Kanan doesn't actually know anything to tell them.
Hera receives orders from Fulcrum, that Kanan is not worth risking their entire team, and that Ezra is to be considered more important at the moment, so they are to lie low and avoid discovery and stop searching for Kanan.
Ezra, Sabine and Zeb disagree, and with the help of Chopper, sneak away from the Ghost to meet with Vizago, the crime lord who may have information. He's reluctant to help them, telling them their activities have made business more difficult, but upon finding out that Kanan and Ezra are Jedi (after a quick demonstration), and will owe him a debt, he tells Ezra that the loss of the Imperial Network is forcing all data to be transferred physically through Astromech droids.
Hera is upset they've gone behind her back, but Ezra proposes sending Chopper in place of one of the Imperial Astromechs, and getting the information they need.
They ambush one of the Astromechs and it's guard, and Chopper takes its place, being taken to an Imperial vessel in orbit, he downloads their communications database, and awaits rescue by the Ghost. The Ghost takes damage from the Imperial Vessel, and the Imperial Astromech droid they've captured actually helps them out in rescuing Chopper as he launches himself out of an airlock on the Imperial vessel. Chopper jealousy knocks the other Astromech out of the Ghost onto the surface of Lothal, before revealing that Kanan is aboard Tarkins Star Destroyer, the Sovereign, in the Mustafar system. Hera reveals that all that she knows about the Mustafar systems is that it has a reputation as the place where Jedi go to die.

High Points : I'm torn about this episode, because while it brilliantly reuses elements from earlier in the series, with the Rebels reaching out to old contacts such as Vizago for help, it does somewhat feel like it's treading water pointlessly to extend the story.
As a writer if you wanted to entirely skip this episode into the next, then the Empire would simply make a public announcement that they've captured the leader of the rebel cell on Lothal, and Grand Moff Tarkin is taking him to Mustafar for interrogation, and nothing else would change.
In fact, I accidentally skipped an episode ahead and watched the final episode of the season instead of this one, and until I looked up the article on Wookieepedia to begin writing this review, I hadn't even noticed I'd missed an episode, Kanan had been captured, and the Rebels were rescuing him, it made sense completely missing this episode out.

However, the dialogue remains snappy, and the message from Fulcrum about the importance of Ezra teases future plot progression, and I have to admit the rescue of Chopper from the Imperial ship, while brief, did impress me, with Chopper launching himself (and a group of Stormtroopers out of an airlock) to allow the Ghost to scoop him up in space.

Low Points : There's nothing particular to hate about this episode, and I perhaps wouldn't have noticed without the accident that led me to skipping an episode, but it just doesn't really seem to have a purpose.

So what do you really think ? : I still enjoyed the episode, and the appearance of an I-TO interrogator droid called Doctor Ball, kind of made my day (since he's from one of my favourite Robot Chicken sketches).

Final Words : Well, one episode to go before the end of the season, and I've rewatched it already, so no surprises ahead for me. Slightly annoyed I've spoiled it for myself.