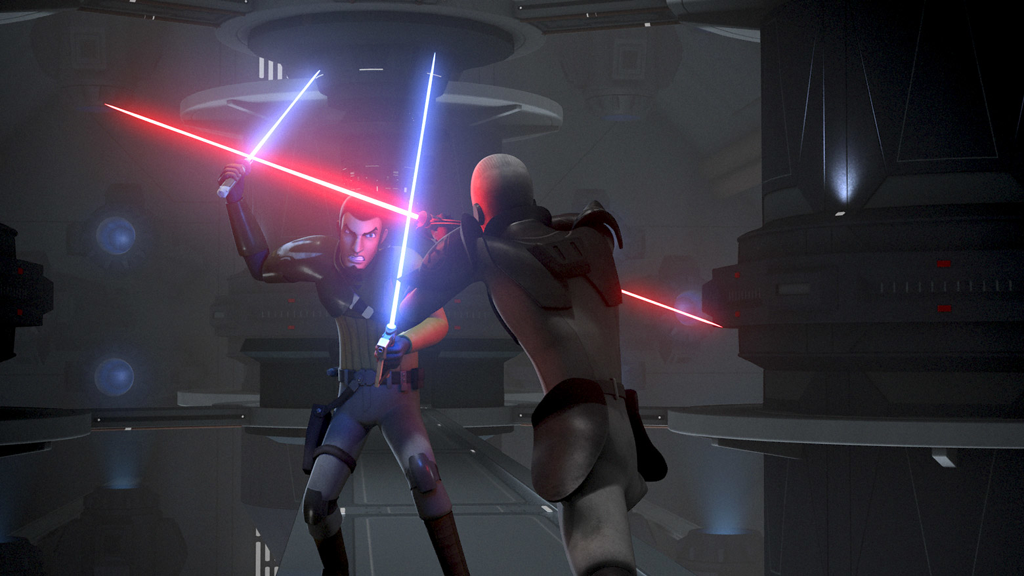 What is it ? : The episode begins with a virtual recreation of the Sabine short introducing the series, "Art Attack", with Sabine breaking into an Imperial landing area where she often paints her art onto the Tie Fighters as well as sabotaging them. However, this time she is distracting the Stormtroopers, allowing Zeb and Ezra to slip in and steal a Gozanti Class Transport. Making off with the ship, and leaving the Tie's in flames, they meet with Hera, who expresses regret they destroyed the Tie Fighters, as their plan requires a small ship which the Empire would accept as one of their own.
Ezra reveals that the Tie he and Zeb stole in the episode "Fighter Flight" was not destroyed as they told the team, but they kept it, and Sabine has been using it for her Art ever since.
They take their stolen Gozanti, and their high decorated Tie Fighter, and head to Mustafar, using codes to be allowed to approach the fleet. Their Tie docks under remote control, and detonates an Ion Pulse aboard the Star Destroyer, shutting the entire ship down, while they dock and cut through the hull near to the Cell Block.
Ezra crawls through Air Ducts and releases Kanan, but before they can meet back up with the others, the two Jedi encounter the Inquisitor and begin duelling him.
Although the Star Destroyers communications systems are down, Tarkin has been prepared for a similar eventuality and has arranged for reinforcements to be sent should he be out of contact, which forces Chopper to take the Gozanti away after contacting Fulcrum for advice. With their planned exit removed, Sabine, Hera and Zeb head to their stolen Tie Fighter, and use it to leave, but it obviously attracts attention and they are intercepted by other Tie fighters.
With the Inquisitor, Kanan uses Ezra's lightsaber, alternately firing it's blaster and using it's blade to confuse his opponent, and Ezra uses the force to snatch Kanan's lightsaber from the Inquisitors belt. Ezra is apparently killed, but in reality is just knocked onto a lower platform hidden from Kanan's view, and Kanan snatches up the second lightsaber and informs the Inquisitor that he has nothing to fear anymore. He smashes the mechanism of the Inquisitor, with the parts falling into the core of the Star Destroyer causing it to overload and begin exploding. The Inquisitor informs Kanan that there are worse things than death, and falls into the explosion.
Kanan and Ezra flee through the Star Destroyer as it begins to explode, stealing the Inquisitors Tie Fighter as the ship comes apart around them.
They help Hera finish off the pursuing Ties, but are then swarmed by many more, before their stolen Gozanti, the Ghost and two Corellian Corvettes come out of hyperspace to rescue them. Distracted by rescuing Tarkin from his exploding Star Destroyer, the Imperial fleet does not react to the Rebel vessels, and after snatching up the two Ties, they flee once more into Hyperspace.
Aboard the Gozanti class, they see a hologram of Senator Organa, who reveals his identity to the Rebel cell (and Ezra and Zeb express surprise that they are a Rebel cell). Realising that Chopper was piloting the Gozanti, they wonder who was piloting the Ghost, and it is revealed to be Fulcrum, who is none other than Ahsoka Tano.
Back on Lothal, Agent Kallus meets with Tarkins shuttle, and tells him that insurrections have broken out across the planet, as the action around Mustafar has gotten back to the people who perceive the Empire as weak and vulnerable.
Tarkin informs him the Emperor has sent another solution, and Darth Vader exits the shuttle behind Tarkin as the Imperial March swells and the season ends.

High Points : Wow, this episode is amazing, not only does it bring back so many elements from previous ones, tying the series together in a way that Clone Wars never managed, with the stolen Tie fighter, Fulcrum, Senator Organa, and even Sabines vandalisation of Tie fighters making an appearance, but it also wraps up the Inquisitor as a villain, and introduces Vader as the main villain for the next season. And also manages to have an amazing amount of action packed into it's run time.

The Rebels plan to disable the Star Destroyer is excellent, if a little easy for them to pull off, but I suppose that it will only work once since the Empire will now be aware of the weakness of letting Ion bomb packed Tie's land next to its central power distribution centre.

The lightsaber fight is brilliant, Kanan using Ezra's lightsaber to distract and confuse the Inquisitors fighting style, and losing his fear to overcome the opponent he's lost to twice before.

And wow, all those revelations, Ahsoka, Vader, the series is really setting itself up for many interesting storylines in the future. Kanan has been seeking another Jedi to help train Ezra, and Ahsoka and Vaders close connection has yet to be explored, great things lie ahead.

Low Points : My problems with the episode are pretty nitpicky, as I can see why they were included in the script. Why does the rest of the fleet not send help as soon as they see Tarkins Star Destroyer lose power, why wait until they fail to receive his regular signal, it just seems a little silly that they wouldn't suspect that something is wrong when the command ship of their squadron has completely lost power. However, explaining their realisation, or showing the crew of the other ships realising this is more time consuming and requires new character models, rather than Tarkin just announcing the signal he sends as he does.

I'm also confused by the bombs that Sabine detonates to disable the Star Destroyer, as it also stuns the Stormtroopers in the corridors of the ship as well. The command staff are shown to be fine, but the Rebels are free to sneak around the massive vessel for a while as the stormtroopers are all unconscious. What kind of weapons are these?, because they seem far superior to normal Ion weapons, as they effect organics as well as electronic systems.

So what do you really think ? : What a great series finale, it's got me totally hyped for the next season which I kind fo want to jump straight into. We've got Vader as the villain, and we've got Ahsoka back, what more could we ask for. . . . .

Final Words : Although it's had it's problems, I consider the first season of Rebels to be a triumph, and while I never originally noticed the problems with some of it's characters it has (Chopper, Zeb and Ezra's squabbling is annoying and repeatedly put the team in danger), so I'm not sure whether they completely go away in season 2, I'm hoping they were just teething problems as the writers settled into writing for these characters.