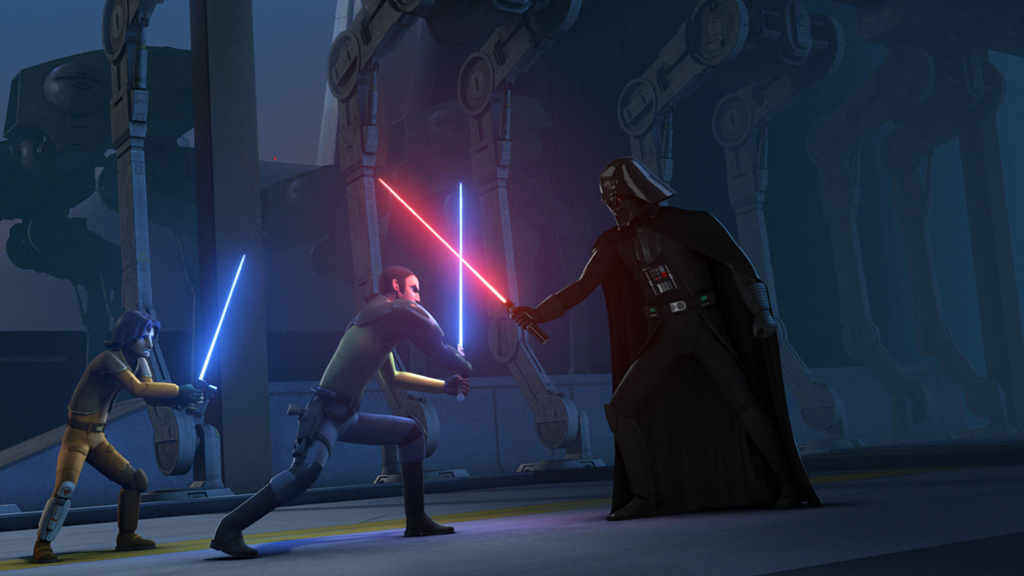 What is it ? : Minister Tua and Agent Kallus are on Lothal discussing the new security that has been introduced to capture the Rebels, however Tua expresses doubt that this is required as she is sure that they have fled the world. Darth Vader enters and informs her that she has been summoned by Tarkin to account for her failures. Remembering the fates of Taskmaster Grint and Commandant Aresko, she is terrified.
Returning from a raid, the crew of the Ghost are commended by Commander Sato for their recent efforts which have secured fuel for the small fleet they are part of, however Kanan expresses to Hera that he is not happy with the arrangement, he doesn't want to be part of a war, he preferred it when they were independent. Hera tells him that this is where they are needed, but Kanan remains unhappy remembering the Jedi Purges and being on the losing side of that particular war.
The team receives a communication from Jho, a contact back on Lothal, who puts them in contact with Minister Tua, who wants to defect, she fears for her life, and is willing to hand over vital information including the Empire's true purpose on Lothal. The team, especially Zeb doesn't believe her, but Ezra, backed by Kanan and Ahsoka insists they help her, and Commander Sato approves the mission.
The team heads to Lothal in a Star Commuter passenger transport, assuming that the Ghost will be recognised, and set up Tua's liberation with Ezra once more disguised as a Imperial Cadet, and Kanan stealing a Stormtrooper uniform. However, Tua is accompanied by Agent Kallus who suspects her betrayal, they intend to steal her shuttle with her aboard, however as Tua board the shuttle it explodes killing her, while this is watched by Vader. Fleeing, the Rebels board their Star Commuter, but as it lifts free they are shot out of the sky by an Imperial Walker.
They scramble from the wreckage and head to one of their safe houses in the city, and plan their next step as the city is closed off and they are trapped. They watch as the Empire implicates their group in the assassination of Minister Tua, and they are forced to flee once again as Stormtroopers raid the house and destroy the building, Ezra's parents house, with a Thermal Detonator.
Hiding Chopper, Hera, Zeb and Sabine in crates, Kanan and Ezra in their Imperial uniforms sneak them into the Imperial complex, which is mainly deserted with the Empire being out in the streets searching for them. They discover a Sentinel Class Shuttle in a hangar for them to steal, as well as a bunch of military grade shield generators, something they know the Rebel fleet requires, so they begin loading them aboard. However, Ezra is overcome with a feeling of cold, and the hangar doors open revealing Darth Vader and some Stormtroopers. Ezra and Kanan duel the Sith Lord, however are incredibly outmatched, and only survive when Sabine distracts Vader by using explosives on the legs of nearby Imperial Walkers and collapsing them onto the Sith Lord as they flee. After Kanan tells Ezra that they just faced a Sith Lord, and they were lucky to survive their encounter, Hera realises their transport isn't capable of the speed or maneuverability to evade the Imperial blockade around the planet, so they must improvise.
They contact Lando Calrissian, and trade half the shield generators for transponder beacons, which duplicate their ships sensor image and distract the Empire while they slip out into orbit and flee into hyperspace. However before they leave Lothal they see that the Empire has just burned Tarkintown to the ground to destroy a potential hiding place for the Rebels.
Returning to the fleet, a locator beacon activates as soon as they dock with their command ship, and they are intercepted by Vader in his personal Tie fighter, who single handedly begins taking apart the small fleet.
Scrambling the Ghost and the defence squadron, they engage Vader but he easily takes out around half of the A-Wing fighters protecting the capital ships, and the crew of their command ship is forced to abandon ship. Ahsoka and Kanan reach out with the force to learn more about it's Sith pilot, and potentially give them an advantage against him, but Ahsoka screams and passes out as Vader senses her. He totally focuses on the Ghost since it contains Ahsoka, and the rest of the fleet slips away, Hera takes the Ghost close to the Star Destroyers, to get them to try to grab her ship with their Tractor Beams, and jumps to hyperspace at the last second, causing the destroyers to capture Vader ship instead.
After the battle, they rendezvous with the fleet and Ahsoka presses Ezra and Kanan for information on the Sith Lord, Ezra sense she is telling them less than she knows, and she denies knowing who the Sith Lord is, saying she hasn't felt anything like him since the Clone Wars.
Meanwhile, Vader contacts Palpatine, and informs him that he has located the apprentice of Skywalker, and the Emperor is pleased, hoping she will lead them to other lost Jedi, including perhaps Obi-Wan Kenobi.

The highlight of the episode is the lightsaber battle between Ezra, Kanan and Vader, the two Jedi are totally outclassed by Vader, but the fact there are two of them does provide enough distractions to stop him totally defeating them, and when Sabine collapses a couple of Walkers onto him, forcing him to levitate the wreckage, that allows them to slip away. Vader is super menacing here, a powerhouse who the two Jedi cannot hope to defeat, they can just hope to survive. Ezra's question and Kanans reply at the end of the battle ring so true at this point, "If that doesn't kill him, what will?!"; to which Kanan replies "Not us. Run!"

While that battle is the action highlight of the episode, the battle at the episodes end should not be ignored, it's still a stunning space battle, again demonstrating Vaders power as he single handedly in a Tie fighter takes apart the Rebel fleet, since no one can get near to him due to his piloting skills. Again they only survive their encounter with him due to a distraction, this time his discovery that Ahsoka Tano still lives and is here. The emotion of this scene, as you wait to see whether Ahsoka will discover that this Sith Lord is actually her old master and friend Anakin Skywalker is notable. You feel for Ahsoka, half hoping she will make this discovery, but half hoping she never will as it may break her to discover his fate, perhaps better she continues to believe him dead.

Finally I must bring note to a very small scene, when the Rebels are fleeing the wreckage of the star commuter which has just been shot down and crashed into the streets of Lothal's capital city. Watching as ordinary people going about their daily lives scatter as the battle comes to them and the starship crashes into the streets, brought it to home that this battle isn't just between the Rebels and the Empire. These battles are taking place next to peoples homes and businesses, these people are just trying to live their lives under Imperial rule. While the Rebels might be fighting for their ideals, the ordinary people are just trying to live. This idea is later brought back into mind by the burning of Tarkintown, as people who have already suffered under the Empire and established this shanty town to survive are once again made homeless, as the Empire denies the Rebels hiding places.
It really brings home to the viewer, and to Ezra that the Rebels activities have consequences beyond just their own personal safety, that there is a price to pay for Rebellion, and the ordinary people pay that price.

Low Points : Although Vader is an incredibly powerful Sith Lord, the idea that he single handedly is one Tie Fighter almost completely destroys the Rebel fleet feels like a bit of a stretch. The idea that two Star Destroyers arrive at the end of the battle but totally serve no purpose felt wrong, as in the Clone Wars we never saw, Anakin, Obi-Wan, Mace Windu or even Asajj Ventress, Maul or Dooku blasting their way through massive fleets single handedly, while they did amazing feats, they weren't totally invulnerable, and Vader is so powerful here he might as well be.

So what do you really think ? : What a great episode, we're setting up here for many of the themes of Season 2 of Rebels, with Ahsoka becoming almost part of the team, which is great, and Vader being a looming threat.

Final Words : For some reason, when I was originally watching Rebels during its initial run I totally missed this episode, I'd seen the scenes with Vader on Youtube, but just couldn't work out where they were from. As I knew I'd seen all the episodes, but hadn't seen them anywhere.
Well, it turns out while this is the pilot episode of season 2, it's often not numbered as such, since it's a double episode. So I'd seen the next episode but never this one. And discovering and watching it has been such a treat, it's fantastic.