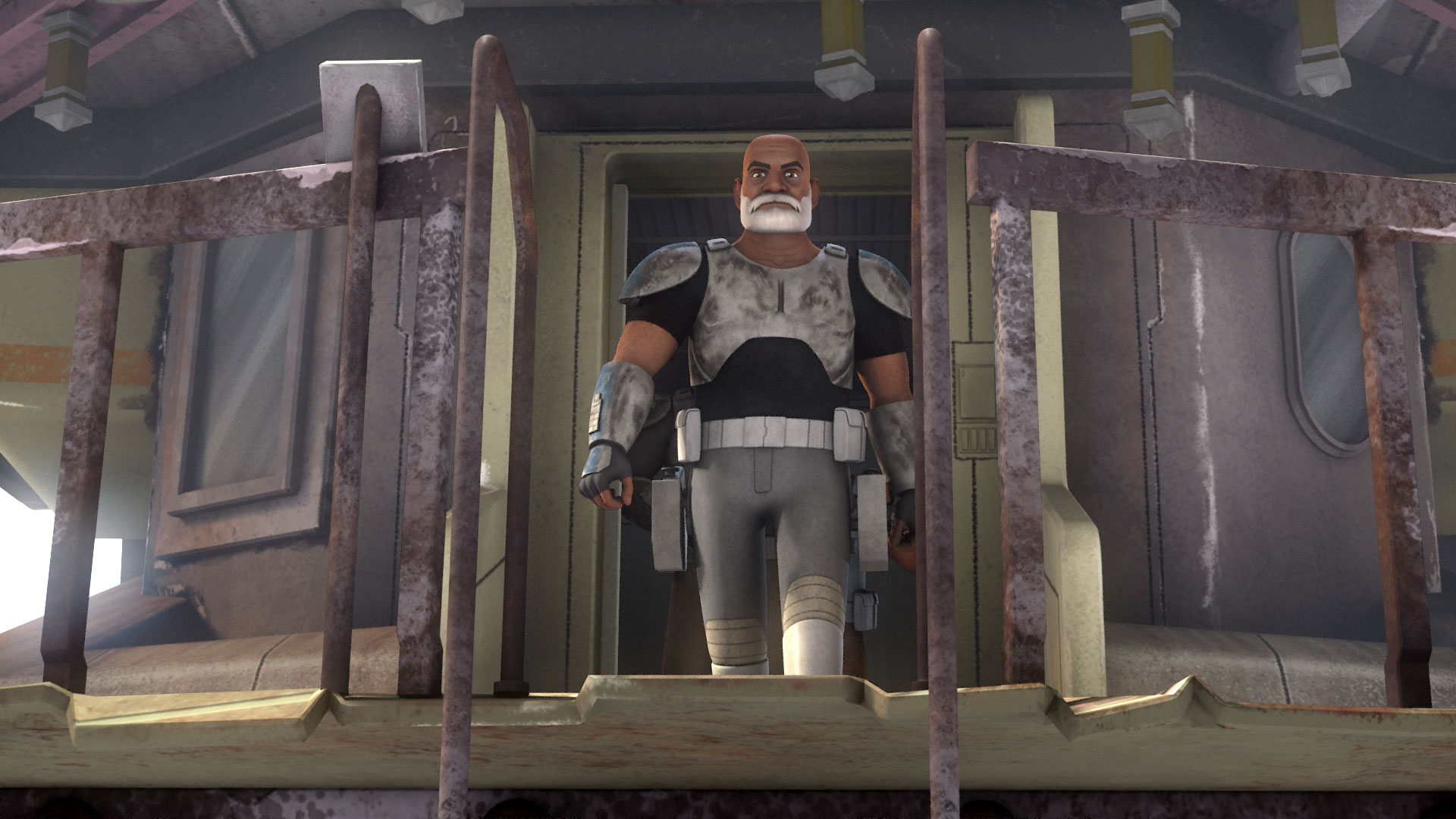 What is it ? : After the destruction of their command ship by Vader in the last episode, Commander Sato remarks that they are short on Allies and have no base to go to ground in and lick their wounds. Ahsoka tells the group that she knows of a Clone Wars Era leader who knows the outer rim and not only will bring tactical knowledge, but also may be able to help them gain a base that the Empire will not be aware of.
The Ghost and it's crew are dispatched to contact the person she mentioned, as Ahsoka herself is going to try to find out more about the Sith Lord they encountered.
Finding a heavily modified AT-TE in the massive desert of the world they're sent to, the group discovers that the person Ahsoka spoke of is none other than Clone Captain Rex, accompanied by Wolffe and Gregor. Kanan reacts badly to the Clones, remembering the extermination of the Jedi, and not trusting them. However the rest of the team trusts in Rex since Ahsoka has recommended him.
While Rex refuses to join the Rebels, believing that he is too old and that his time as a warrior is behind him, he does say that he'll give them some potential locations to use as bases, places the Empire will not be aware of.
Meanwhile the Empire receives a message from a Clone Trooper, telling them he has encountered a Jedi, while they are skeptical as the trooper has a history of making wild reports, but they dispatch a Probe Droid to investigate.
While they are waiting for Rex to compile the list, the Rebels are asked by the Clones to help them in their hunt, asking Zeb especially to help. Mid hunt, Ezra pushes the Clones as to why Zeb should be good at hunting their prey, and Gregor reveals that their prey love the smell of Lasat, and possibly the taste too, and they realise that he's not helping by being a hunter, he's the bait.
As one of the massive sandworm like, Joopa, grabs Zeb, the walker reels it in and fires it's main cannon killing the creature and retrieving Zeb from it's mouth, while they are watched by the Probe Droid.
Sabine discovers the transmission to the Empire came from the walker, and that a number of messages from Ahsoka to Rex had been blocked, and Rex turns on Wolffe who admits he did it fearing repercussions from the Empire if they worked with Jedi. They locate and destroy the Probe Droid, but only after it has sabotaged the Phantom, stopping them escaping with the Empire due to arrive as the screen fades to black with the words "To be continued".

High Points : Yay, Rex is back, the Clone Captain who provided much of the heart of The Clone Wars series, introduced way back at the first episode of that show along with Ahsoka, he's instantly a brilliant addition to Rebels. Wolffe isn't quite as welcome, as he wasn't a particularly noteworthy Clone Trooper. But Gregor, the Clone Commando who has lost his memory when located working in a bar by diminutive Colonel Gascon and his Droid Squad back in season 5 of The Clone Wars, is welcome. We hadn't seen him since that storyline, and it turns out he got a little brain damaged in the explosion at the climax of that Story, and isn't quite right anymore.

The highlight of the episode to me was the massive homage to Jaws while they are hunting the Joopa, from the layout of their Walker with the forestructure, to harpooning the creature so it can't return to the deep, right down to the music. The entire scene is done perfectly, and is a brilliant change in tone for the series, handling this action scene with a much lighter hand than usual, which makes it seem more fun even if Zeb does seem to be in massive amounts of danger being used as bait.

And although I just touched on the Clones modified AT-TE walker, I must mention it again, I adore the look of it, with structure added to the outside of it for hunting the Joopa's, and it being a little more homely than the combat vehicle it was designed to be. The Clones using this remnant of Clone War technology as their home seems perfect, and the mish mashed look of it something I adore.

Low Points : Wolffe's betrayal is just brushed over, and while Rex and Gregor know and trust him, I was surprised to see there be no repercussions for his actions. Wolffe simply explains he was doing it to protect his friends, and Rex tells him that he was wrong, and all is seemingly forgiven.

And while it was fun, I'm somewhat skeptical about using Zeb as bait for the Joopa, he seems to get completely swallowed, but is completely fine immediately afterwards, and is willing to forget having his life endangered almost instantly.

So what do you really think ? : A great episode, not only re-introducing the character of Rex to the series, but also providing a fun diversion in the Joopa hunting and some fantastic character moments from Zeb and Ezra throughout.
I continue to be impressed by the tone of Rebels being something completely different from other rebellion era material we've seen. Rebels has a constant tone of being among the remains of the Clone Wars, with wrecked vehicles constantly turning up and characters from that era. It really shows how this galaxy spanning war left it's mark on the galaxy, where as most material neatly sweeps it away as if the Clone Wars ended and everybody just tidied up and got on with their lives. In Rebels people were left scarred and effected by the battles they witnessed, there are left over weapons and bases, something the Rebels desperate for arms in their battle against the Empire can pick over. It really gives this series some emotional weight that otherwise it would be missing.

Final Words : Well, part 2 to come of this story. I have to admit I was enjoying this one so much that I had to fight off putting the next episode straight away. Oh well, will have to wait until tomorrow.