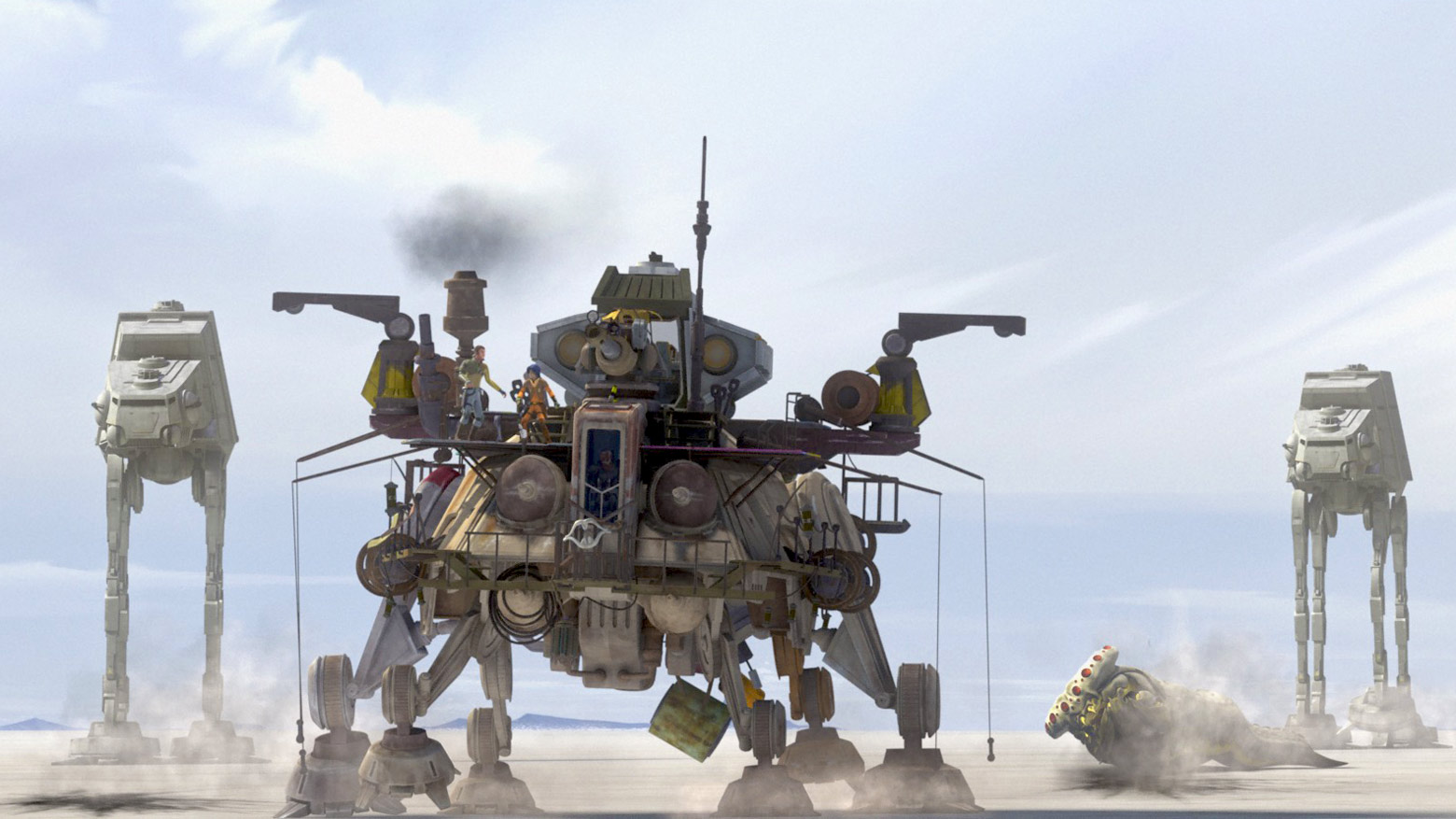 What is it ? : Wolffe has contacted the Empire, and a Probe Droid has sabotaged the Phantom, so the Rebels are stuck on the surface with the old Clones. Hera is in orbit repairing the Ghost's Hyperdrive when a Star Destroyer comes out of Hyperspace, and Hera shuts down all systems to avoid being detected.
Agent Kallus contacts Wolffe to find out where on the planet they are, Wolffe lies and says the Jedi aren't there, but Kallus has images from the Probe droid, and a Tie Fighter patrol locates the clones AT-TE. The Rebels and the Clones fight the Tie Fighters, destroying one and forcing the others away. Agent Kallus travels to the planets surface in one of three AT-AT's they deploy, and the AT-TE flee's into a dust storm.
Rex realises that no-one can see in the storm except the Jedi's senses, so gets Kanan to guide the Walker to the AT-AT's, and Ezra to man the main gun, a tactic that works and they destroy one of the walkers.
In Orbit, the Star Destroyers captain, Admiral Konstantine receives orders from Darth Vader to meet his shuttle at other coordinates, so leaves Kallus with just his remaining walkers on the surface of the planet.
Sabine finally finishes repairing the Phantom as they exit the dust storm, and the Rebel launch, preparing to leave the Clones behind, but as the AT-TE duels with the walkers and becomes disabled, they return commandeering one of the two remaining AT-AT's, allowing Rex and the other clones the opportunity to fire and destroy Kallus's walker, leading him to flee on a speeder bike.
Vaders shuttle arrives at the Star Destroyer, but rather than Vader aboard, it contains another Inquisitor.
Rex decides to join the Rebels, and back at the fleet he meets with Ahsoka and the two old friends hug.

High Points : The absolute high point of this episode to me was the segment in the dust storm, the thick clouds obscuring vision with the lights of the various walkers barely piercing. This segment played out like a World War 2 submarine movie (or the Mutara Nebula sequence in Star Trek 2: The Wrath of Khan), with the two sides unable to locate one another, and trying to work out what their opponent will do.

The final battle is great as well, and it's great seeing the two types of Walker duelling, with the AT-TE fighting the AT-AT's, at a massive disadvantage which is somewhat balanced out by the skill of it's crew.

Finally, the dialogue is wonderful as always, the highpoint for me being the Clone's seeing the AT-AT's for the first time, commenting on them only having four legs, and wondering how they don't fall over, also Rex's taunts to Kallus about hoping he's brought a better class of soldier than Stormtroopers, and Kallus remarking that he has a lot of them.

Low Points : A couple of fairly minor points, and the first one I possibly missed. But why can't the Ghost pick them up from the surface? It's hyperdrive is broken, but the other systems are absolutely fine, what's stopping them picking up the crew, and either clamping the Phantom to it's lower hull (as they did when it was out of fuel in a previous episode), or abandoning it to save their lives?

Also, during the battle in the dust storm, Ezra is manning the guns and the storm is obscuring the AT-AT's, so he must use the force to aim. However, while the AT-AT's themselves are obscured, their lights are clearly visible through the storm, so why doesn't he just shoot at them? While it might not be targeted as well as he can do through the force, the mass driver cannon on an AT-TE is a powerful weapon, and could probably down an AT-AT anyway.

So what do you really think ? : A great episode, if a little contrived. Why doesn't Kallus order orbital bombardment as recommended by the Admiral? Why doesn't the Star Destroyer deploy fighters or anyone else to help Kallus when it's ordered away? Why doesn't Hera help her friends on the surface before being forces to go to silent running by the Star Destroyer?
But once it's forced into a Walker duel on the desert surface of the planet, it's great.

Final Words : So, we've now got Rex and Ahsoka in the series, two of the best elements from The Clone Wars, the feeling of fighting the Empire amongst the devastation of the Clone Wars continues, and it's very different from anything we've seen before, and one that really works.