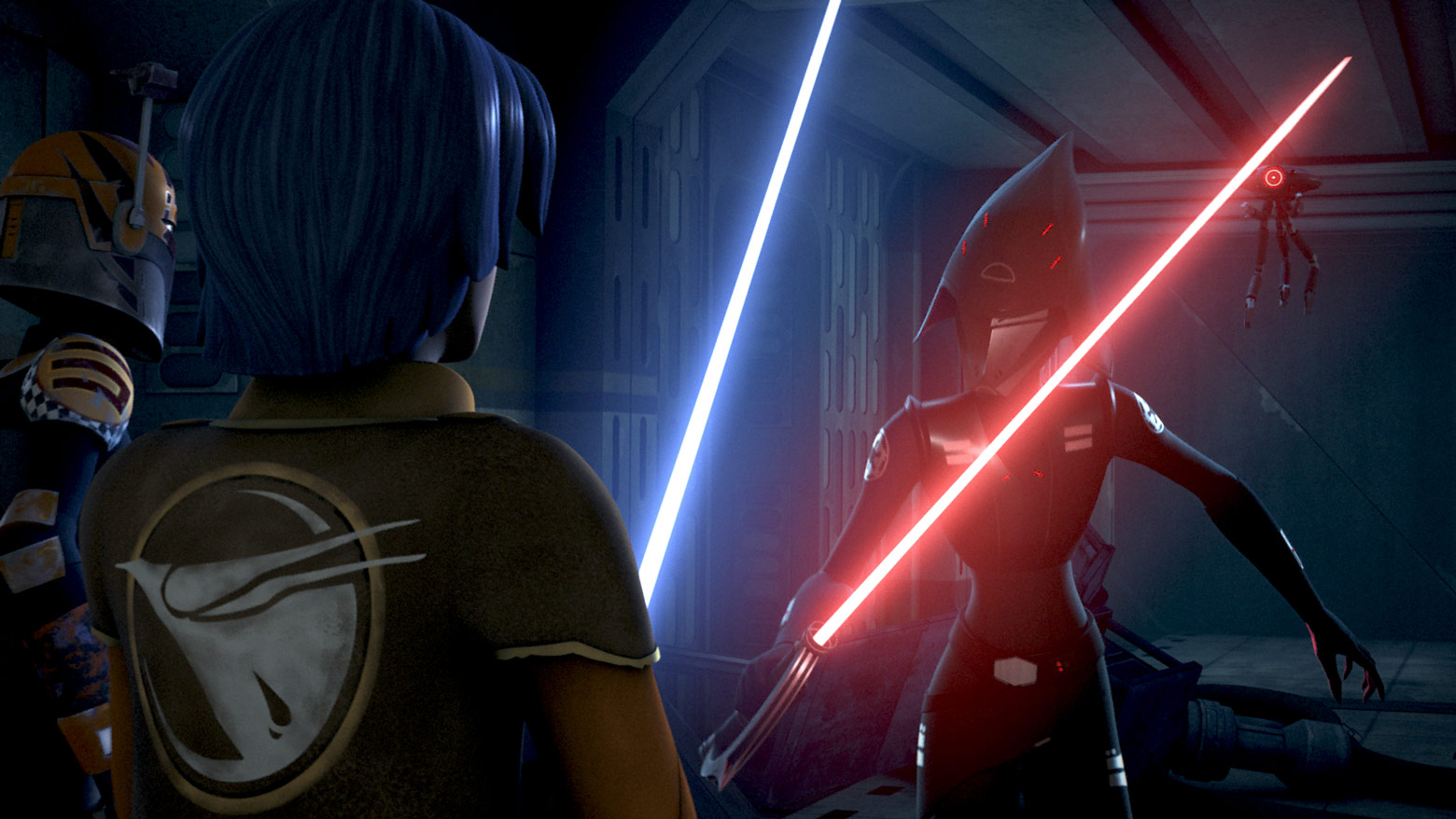 What is it ? : Rex and Kanan are arguing about how to train Ezra, so he slips aboard the Phantom to join Sabine, Zeb and Chopper in getting medical supplies from an old Republic station.
Aboard the station Chopper reactivates the power, alerting the Empire to their location, and an Inquisitor is dispatched to get them. However another Inquisitor is already in wait for them, and she captures Ezra, while the other captures Sabine. Zeb rescues the two of them, luring the Inquisitors into a landing bay by sending Ezra a communication that Kanan and Ahsoka will be there. He then ambushes the Inquisitors with the Phantom, distracting them long enough with blaster fire, for Sabine and Ezra to get aboard and for their escape.

{sorry about the brief episode description, I just lost all my work I spent 50 minutes writing, so am re-writing quickly}

High Points : This isn't an outstanding episode, although still has all of the elements of Rebels in it, the competitiveness between Zeb and Ezra, the snappy dialogue, and it does introduce the two new Inquisitors who manage to be unique compared to the Grand Inquisitor of the last season.

The high point of the episode for me though was definitely the setting, as I've said before (and will say again), I love how Rebels is set among the ruins and remains of the Clone Wars, how they call on Republic heroes to help them in the war, and scavenge for supplies in the wreckage of a Republic station. The Clone Wars was galaxy spanning, and no matter how powerful the Empire seems to be, it's not as massive as the Confederacy and Republic were in their prime. This is something we only glimpsed in the original movies, with Leia calling on Obi-Wan as someone from the Clone Wars, but it makes so much sense that the Rebellion needing weapons and supplies would head to these abandoned caches from the Clone Wars.

Low Points : I've commented before how Ezra and Zeb's unprofessionalism has been the weakest point of Rebels, with them endangering the team with their conflict, so the very last thing we need is more of that. But here we have with Kanan and Rex arguing over Ezra's training, which seems at the very least out of character for Rex. Only last episode we had him calling Kanan "General", and now we've got him disputing the way he's training Ezra in a way he'd never have done with any of the Clone Wars era Jedi.

I'm also not happy with the way they are treating Zeb, he's a great character, the last remaining member of his species, having watched them be exterminated by the Empire, he's a experienced warrior, a member of the honour guard of his entire species. But he's constantly used as comic relief (in this episode he gets stuck in an air duct), in a way the writers would never do with Rex, Sabine or Hera. All those characters are experts in their fields, and are very much the equals of the Jedi, but Zeb is never allowed the same respect, seemingly ranking the lowest in respect in the team below Chopper.

So what do you really think ? : While not a favourite of mine, it's a solid story with decent progression in the overall storyline. It was also nice to note that the Seventh Sister is voiced by Buffy the Vampire Slayer herself, Sarah Michelle Gellar. She's married to the voice actor for Kanan, Freddie Prinze Jr, so it's interesting to hear them voice act opposite each other as opponents.

Final Words : The brilliant start to season 2, with the introduction of Vader as a villain, Ahsoka, and Rex and the other Clones, dips somewhat here, but if this is a low point then the standard is still very very high.