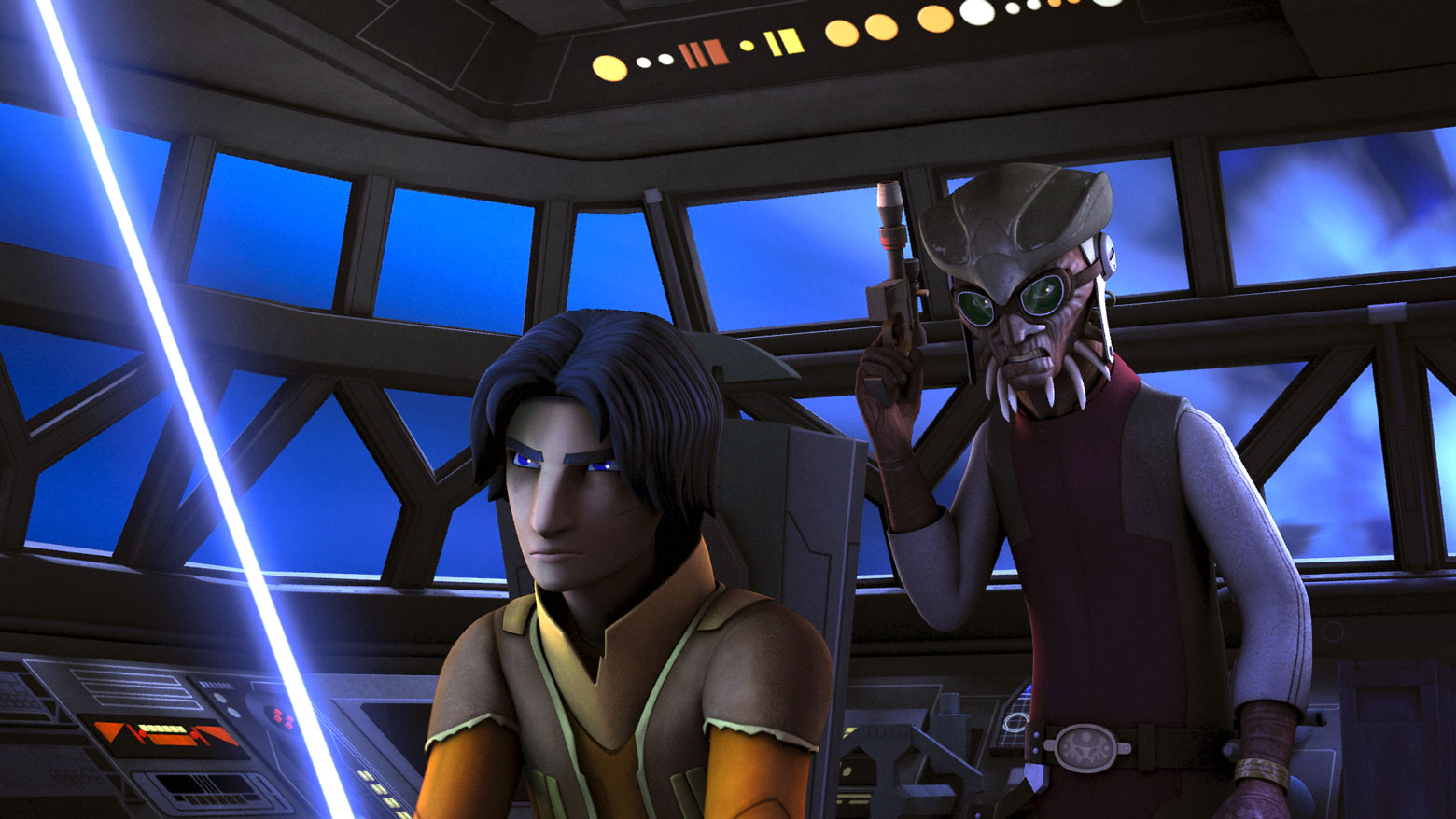 What is it ? : With Kanan and Rex still bickering on how to train Ezra right, and the pressure of doing as much as everyone else as well as all his training, Ezra takes the opportunity to slip away when Chopper picks up a distress call from Vizago's ship.
Arriving at the Broken Horn, he boards the disabled vessel and finds Vizago's bodyguard droids all disabled as well, but when he gets the bridge he finds not Vizago aboard, but Hondo Ohnaka. Who claims he won the ship from Vizago in a game of Sabacc, proving it by re-enabling the droids for a moment.
Wanting to keep his identity secret, Ezra tells Hondo his name is Lando Calrissian, which impresses Hondo that one so young could have the reputation of Lando. The crippled vessel is attacked by an Imperial patrol cruiser, and Ezra and Chopper repair the hyperdrive allowing them to jump away, making a deal with Hondo for some power generators that Ezra is aware the Rebellion needs in exchange for their help.
Arriving at their destination, they find Azmorigan awaiting them, but he double crosses Hondo wanting to take the generators and gather a bounty on Hondo's head. In the process he recognises Ezra and reveals that he's not Lando. Chopper and Ezra force Azmorigan to flee, and Hondo gets the money, and keeps the generators. Afterwards, Hondo reveals he recognises Ezra as a Jedi, and asks his real name, which Ezra tells him. For the rescue, Ezra demands he gets the generators as his cut, but while walking through the Broken Horn hears a knocking and discovers Vizago locked in the brig. Vizago reminds him of the debt Ezra owes him for the information leading to Kanan's rescue, so Ezra takes him to the bridge, where Vizago steals the remote for the droids and orders them to kill Ezra and Hondo.
During the fight, Hondo slips away stealing the Phantom with the generators stowed aboard, leaving Chopper and Ezra stuck aboard the ship with Vizago. But with the droids disabled once again by Ezra, Vizago just puts them aboard an escape pod, declaring he hates children.
Back at the Ghost, the Phantom has arrived having been locked on autopilot by Chopper before Hondo stole it, and Ezra arrives back to find Hondo telling a version of the story where Ezra rescued him from the dastardly Vizago. When Ezra reveals the truth, Hondo gifts him the Generators and Ezra comments to Kanan that Hondo is what he could have ended up like if he'd never met the Rebels.

High Points : The episode is a brilliant romp, with Ezra peeking into a criminal life that he could easily have slipped into if he hadn't joined the Rebels. The script and dialogue is snappy and full of action, but the real high point of the episode is . . . Hondo, wow, he's back and he's amazing, he steals all of the best lines in the episode and remains the amazing character that's he's always been. Likable but not trustworthy to an extreme degree.

"So, at last I meet the semi-famous Lando Calrissian! A little younger than I expected."

â€śOh, the stories I could tell. So many of them true.â€ť

Azmorigan: - "I don't deal with washed-up old relics."
Hondo:- "Come now, let's leave your wife out of this."

â€śOne of my best friends was a Jedi. I'm pretty sure we were friends.â€ť


I could basically quote almost every line he speaks, as every time I add another to the above list, I think of yet another brilliant quote.

Low Points : Anything I complain about in this episode is just nitpicking, for example, the Rebels paint little Tie fighter symbols on the side of the cockpit for each of their kills, but doesn't that make it difficult to sneak into Imperial ports? But that's just nitpicking.

There's not a lot of substance to this episode, but that's kind of the point of it, this is the risky adventure filled yet pointless life Ezra could be living if he wasn't with the Rebels . . .

So what do you really think ? : I loved it, and would happily watch a snip off series just about Hondo who by this point is pretty irredeemable, yet absolutely entertaining to watch. I usually complain when an episode is filler, but this one manages to be utterly fun and great to watch despite it not really involving the main storyline of the series.

Final Words : I hope they get on with the Vader, Tarkin and Ahsoka storylines next episode, but with diversions like this, I don't mind a little time away from that.