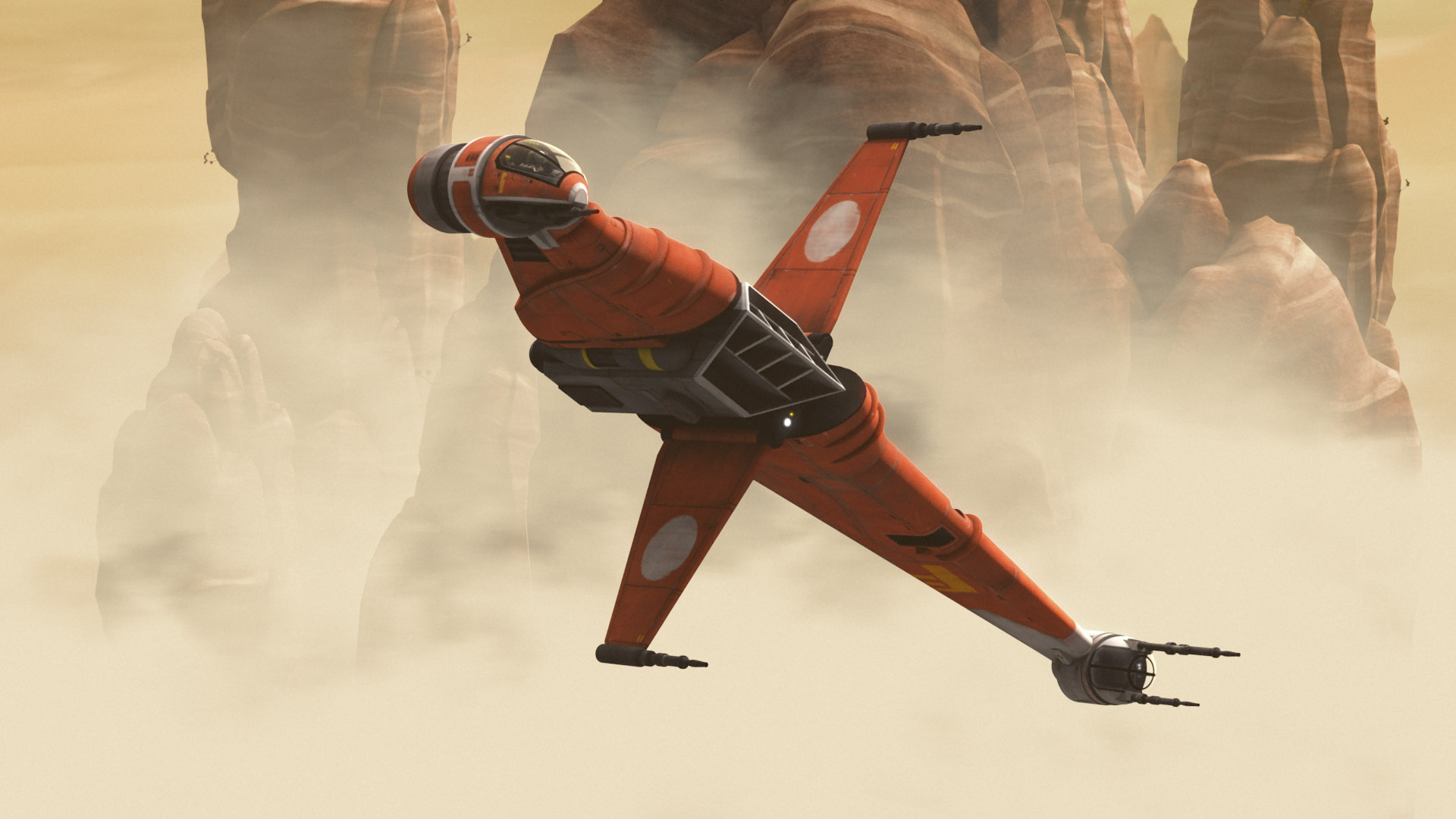 What is it ? : The Rebel fleet is trying to drop supplies at Ibaar, a world that the Empire is starving the population of, this is a trap to force a confrontation, but one the Rebel fleet cannot ignore. However, the transport carrying the supplies is destroyed by Agent Kallus and the Imperial Blockade.
Turning back, Rex reveals he has been in touch with a engineer called Quarrie, who claims to have built a heavy starfighter which is a blockade buster which would be perfect in these circumstances.
However, this may not be available in time before the population of Ibaar starves, so the team splits, with Zeb, Hera and Sabine taking the Phantom to Quarrie to get the fighter, and Ezra, Chopper and Kanan taking the Ghost to gather replacement supplies and make the delivery on time.
The planet where Quarrie is has heavy electrical storms which knock out the Phantoms systems causing it to make a crash landing at Quarries base. This does not inspire Quarrie in Hera's skill as a pilot and he refuses to hand over his ship to her, but shows it to the team, revealing a prototype B-Wing fighter.
As they repair the Phantom, Quarrie helps, and he and Hera talk, and she discusses why she became a pilot which convinces Quarrie to allow her to test his new fighter.
She takes the B-Wing on a trial flight, and after a scary moment when the engines fail just after takeoff, she leads a successful test flight, but complains that the fighter is underarmed. Quarrie reveals it has another fire mode, which combines the weapons in a massive blast, but the power surge destroys the fighters hyperdrive.
Quarries reveals that he's equipped the Phantom with his last hyperdrive, so they hook the B-Wing to the Phantom and let the shuttle carry the fighter through Hyperspace.
Meanwhile the Ghost is making the delivery run on Ibaar, and the Empire is targeting it because it carries the cargo needed by the planet. Hera arrives in the B-Wing, and destroys an Arquitens class cruiser with a blast of the main weapon, allowing the Ghost to slip past and drop it's cargo, the fleet then retreats, it's job complete.
Commander Sato of the Rebel Fleet reveals that Bail Organa has located a shipyard where the B-Wing can be mass produced for the Rebel Alliance, and promotes Hera to a Captain within the Rebel Alliance for her heroic actions which saved the mission to Ibaar.

High Points : A great episode, which manages to re-introduce the Shantipole project into Canon, and provides an interesting backstory to the creation of the B-Wing. While some details are different, it's close enough to the version introduced in the Star Wars D/6 adventure "Strike Force: Shantipole", in fact I'm intrigued to see if the two original stories can be made to fit together, with one following the other.

The prototype B-Wing itself looks great, with a secondary cockpit resembling those on a LAAT/i at the other end of the main wing, a brilliant looking addition and one that makes the B-Wing more like the Fighter Bombers it is supposed to serve the role of.

Finally the character of Quarrie is great, not only is he named in homage to Ralph McQuarrie who designed the look of the Star Wars universe we know and love, but also the character is a lot of fun, with a self confidence but a whole load of heart too.

Low Points : While Quarrie claims the world he is based on is to try out the ships he builds, if they can fly there, they can fly anywhere, but honestly doesn't he need supplies? The planet is dotted with the remains of ships which have crashed there, were these just delivery ships contain parts and food he needs to continue his work?

So what do you really think ? : Another great episode, with the storyline progressing nicely as the crew of the Ghost merge with the Rebel Fleet and become more part of the Rebellion at every step. Slowly introducing the vessels and technology that we see in the movies is also great, letting us see why we never saw B-Wings before Return of the Jedi.

Final Words : I really thought that Ahsoka was in Rebels a lot more than she actually is, my memory was that she was a main character in season two, but they're keeping her appearances rare, and that just leaves me wanting more. Rex however is definitely part of the crew now, even if he doesn't go on every mission with them. They're building the cast of the show without leaving any of the original main characters sidelined. Even when, like early in the season for example, Hera was often playing little part in the stories, she now is the main focus of this episode.

One criticism, not of this episode, but of the series as a whole, I haven't yet made is that we've not had a lot of history for the main characters. We know that Kanan was a Jedi Padawan that ran away during Order 66, and we know that Zeb's species were wiped out by the Empire, Sabine is pretty much a mystery at this point, and Hera grew up during the Clone Wars, but that's about it. I'd love to know more.