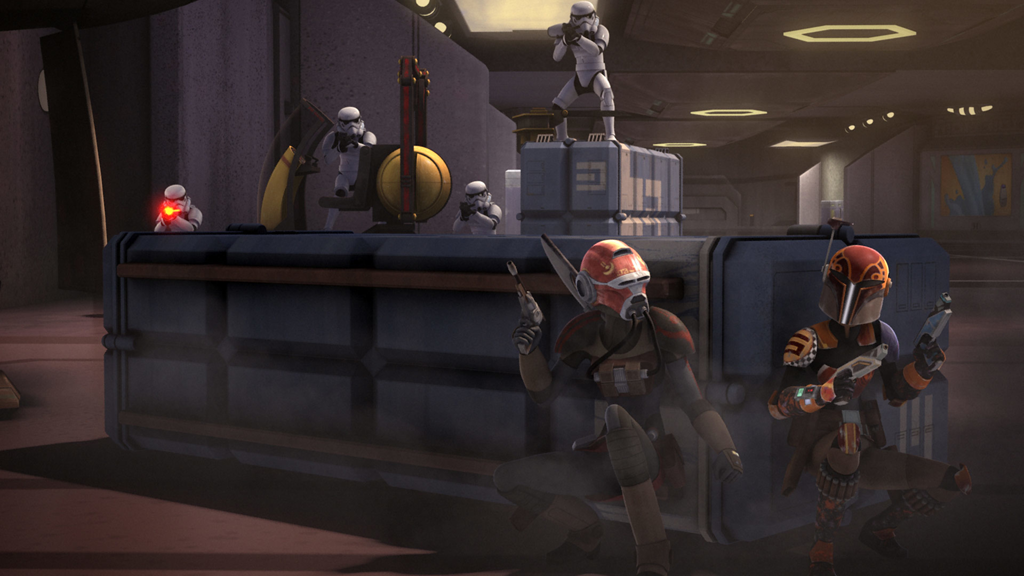 What is it ? : Hera sends Sabine to collect an information courier, and sends Ezra and Chopper to assist but makes sure they're aware Sabine is in charge. They discover that the courier is a Gonk Droid, and they are ambushed by a Bounty Hunter also sent to get their courier.
The Bounty Hunter is Ketsu Onyo, and knows Sabine because they were partners in the past, they almost fight, but their confrontation is broken as Stormtroopers arrive and they end up fighting the Stormtroopers. Ezra escapes onto the rooftops, Sabine and Chopper steal a transport taking the Courier droid, and Ketsu follows in her own ship.
In space, Ketsu cripples the transport, blowing the airlock out, and Chopper falls into space, but uses his thrusters to get onto her hull and disables her weapons. The two ships dock, and Sabine and Ketsu have a confrontation in the docking tube, where Sabine forgives Ketsu for abandoning her, telling her that she's found someone who'll give her a second chance, and that's what she's giving Ketsu now.
An Imperial cruiser arrives to retrieve the stolen Shuttle, and the two work together, rigging the stolen shuttle to explode as the two ships are captured in tractor beams. The shuttle explodes, and the explosion blocks the tractor beam from Ketsu's ship, allowing it to escape and Ketsu helps Sabine make the delivery of the courier. Sabine tells Ketsu that she has a place in the Rebellion, which Ketsu is grateful for, but isn't ready for yet and departs in her ship.

High Points : I was complaining in my last review that we hadn't gotten enough background on the non-Jedi characters in the series, and here we are with an entire episode building on Sabines background, we find out she went to the Imperial Academy, and escapes along with Ketsu, becoming a bounty hunter for some time, before she was abandoned and left for dead by Ketsu, meeting up with Hera and the Rebels who have given her a chance at redemption. There's still loads to find out about her, but now we know her motivations, she's done bad things and is making up for it, she's loyal to the Rebellion for saving her and giving her another chance. While this doesn't exactly gel completely with her personality as the fun loving artist, being a far darker side to her, but this conflict between who she is now, compared to what she was forced to do to survive is compelling.

The action is decent, and the plan to destroy the shuttle to provide cover for them to escape is a solid one and great to watch play out.

Low Points : The episode seems a little unbalanced, with far too long playing out before they locate the courier, an overlong scene with them repeating their pass phrase to everyone exiting the transport ship, before finding out it's actually a Gonk droid which was travelling as cargo. By the time the titles rolled and the action begins, it was so far into the episode I'd forgotten the titles hadn't rolled yet, while in the context of the episode, this is only a couple of minutes, the episodes are so short that we're talking about 10% of the run time wasted on this before we really get into the meat of the story, Sabines backstory with Ketsu.

So what do you really think ? : A solid episode which fleshes out Sabines backstory, yet manages to have some interesting action and story of it's own, but it definitely wouldn't be in my list of episodes to recommend or rewatch.

Final Words : I absolutely adore that we're now getting episodes focusing on members of the team who aren't Ezra and Kanan, finding out more about the other characters is great, as is spending some time with them, I guess we've done almost everyone so Zeb's will be next, and I'm looking forward to it.