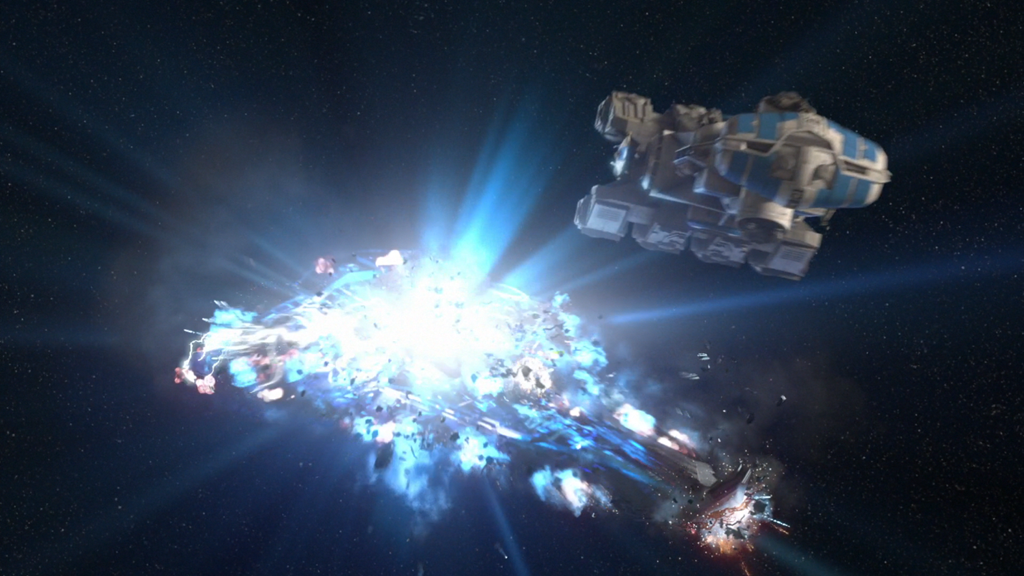 What is it ? : Once more trying to avoid the conflict between Kanan and Rex regarding his training, Ezra has volunteered to help Commander Sato track down a missing Rebel patrol, but Sato is not convinced of Ezra's usefulness since he is still young. Ezra senses something is about to happen, and their Corellian Corvette is dragged out of Hyperspace and captured by an Imperial Interdictor Cruiser, a brand new design of weapon which can rip ships out of hyperspace using it's gravity well generators. Sato manages to get a distress call out, before he and Ezra are taken before the Admiral in charge of the ship. Although Sato claims to be a corporate representative, the Admiral recognises him, and when Ezra claims once again to be Jabba the Hutt, the Admiral recognises it as an identity used by Ezra Bridger. He informs Agent Kallus of the capture, who warns him not to underestimate Ezra, but the Admiral scoffs that the Imperial navy can handle one child.
Having received Sato's distress call, and Sabine having explained the Gravity Well generators to them, Rex, Chopper and Kanan are dispatched to rescue Ezra and Sato, disguised as Stormtroopers and aboard a captured Imperial Sentinel Class Shuttle. Rex uses codes he helped write for the Republic/Empire and the Interdictor allows them to land.
Once aboard, Kanan uses the force to get past the Stormtroopers who have orders to not allow them aboard, and they locate where Ezra is being held. Meanwhile Ezra uses the force to activate his lightsaber on the belt of one of his escorts, and manages to escape from captivity ready to flee, but two Stormtroopers charge round the corner and he stuns them, before noticing they are escorted by Chopper, who tells him he just stunned Kanan and Rex. Telling them they heroically fought off hordes of Stormtroopers and rescued him, Ezra is cut short by Chopper playing on repeat a recording of him shooting them, something Rex is hugely proud of.
As they rescue Sato and his crew and lead them back to the Corvette, Ezra and Chopper head off to sabotage the gravity well generators, and Rex gets seperated from them all and is captured. Sensing Rex being tortured, Kanan heads to the bridge of the vessel to rescue him, but they are too far away from the Corvette to reach it before it leaves.
They launch themselves in an Escape Pod, and as the Corvette collects them and attempts to escape into Hyperspace, the Interdictor uses its gravity wells, and rips them back into realspace. However the gravity well, sabotaged by Chopper, pulls in the escort vessels for the cruiser, causing them to crash and explode in a massive burst of light as the Corvette manages to escape.
Back at the fleet, Sato is impressed by the team, especially Ezra, and Ezra tells Kanan and Rex that when they're not arguing they work well together, the two then salute in mutual respect.

High Points : Another great episode, with fantastic dialogue, between Kanan and Rex, and between Agent Kallus and the Admiral, even an Imperial officer commenting that the Commissary is the last place Rex in Stormtrooper armour needs to go. There are loads of great lines as Rex complains about Stormtroopers and their armour, Kanan comments that Rex may have fought side by side with Jedi before, but Kanan will probably be the last, and loads of others.

The action is great as well, with the fight in the corridor as Ezra gets his lightsaber back worth noting, but especially the zero-g fight as Chopper sabotages the Gravity Well Generators as Ezra distracts the guards.

A very quick moment I adored, was showing how powerful Kanan is becoming, as he deflected blaster bolts with his lightsaber while facing in the opposite direction and having a conversation.

But the explosion as the Interdictor Cruiser is destroyed is amazing, the escorting Arquitens cruisers are dragged in by the gravity well, crashing and scraping across the hull into the bridge and the gravity well generators, which then explode while still dragging everything in, in an implosion at the same time. The ship bursts with bluish light and is torn apart by the forces exerted on it. I've never quite seen anything like it before, and I found it amazing to watch.

Low Points : I've no massive complaints about this one, although I found Sabines knowledge of the Gravity Well generators and the construction of the Interdictor cruiser to be a little convenient. Shouldn't she perhaps have mentioned this looming threat to Rebel convoys and vessels before now? It just seemed rather than knowledge the character should have known, there was exposition that needed to be done, and she was chosen to do it.

So what do you really think ? : It seems almost as if as I notice and complain about elements of Rebels, the writers noticed at the same time and deal with it, so I'd complained about the lack of backstory for characters and the last episode filled in some of Sabine's backstory. And I've been complaining about the rivalry between Kanan and Rex, and now the series is dealing with it too, I'm not sure if the writers are skillfully putting in problems to niggle me and then fixing them (deliberately adding conflict between Rex and Kanan to resolve it in a meaningful way), or are just dealing with elements of the series as they became aware of them. Either way, I keep loving this series more and more.

Final Words : Although I've watched Rebels through before, I keep finding episodes I don't remember, or barely remember, and this was one of them. Which is odd, because this is definitely one of the better ones which I should have enjoyed when I originally saw it. All I can think is, that at the time I had no knowledge of who Rex was, so much of the enjoyment of the episode is based on knowledge of his history and personality.