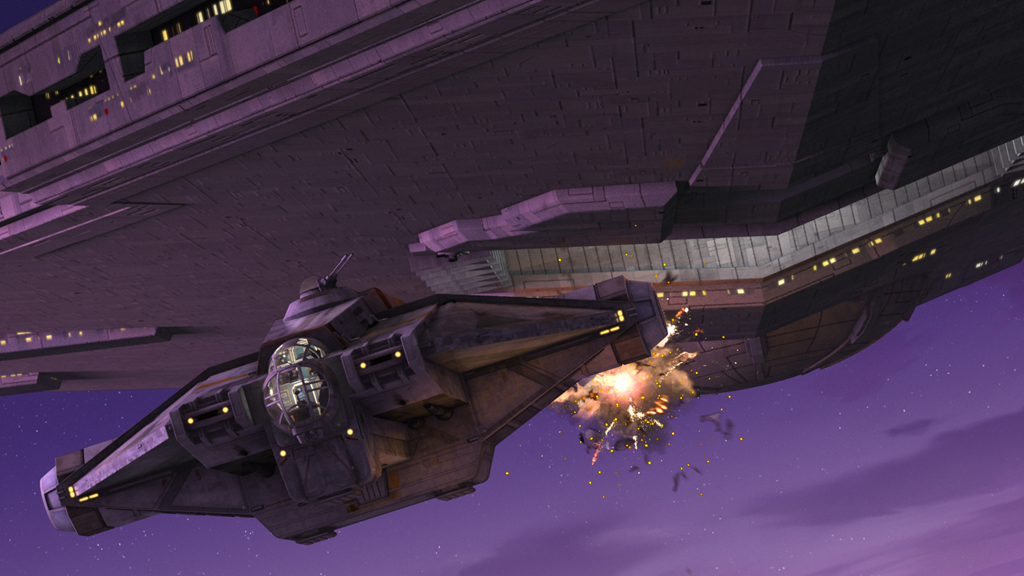 What is it ? : Ezra receives a vision of his parents, also of a White Loth-Cat, and himself fighting Imperials with his lightsaber. He brings this information to Kanan and Hera, who reveal two things, firstly they have been using all their contacts to find out everything they can about where Ezra's parents are, but only have managed to find out that they are in one of many hundreds of Imperial Prisons. And also that there has been a breakout at an Imperial prison only the night before.
Kanan coaches Ezra at how to use the force to narrow down the possibilities, which leads him to believe they should go back to Lothal, and Hera readies the ship to leave, they summon the crew back to the vessel, and Zeb tells them he hasn't seen a Stormtrooper all day, which Sabine recognises as Imperial Tactics before an all out assault.
At that very moment, the sky darkens as a large fleet of Star Destroyers moves into position over the city, and Zeb is ambushed by a squad of Stormtroopers. Kanan and Ezra head off to help, and although the Stormtroopers are easy to beat, the battle is joined by the two Inquisitors. Ezra angrily goes to engage the two, but Kanan skillfully shoots out a blast door lock, closing the door and allowing the Rebels to slip back to The Ghost while the Inquisitors are locked on the opposite side of the door.
The Rebel fleet lifts from it's hangars and tries to escape, but Commander Sato's command ship, A Corellian Corvette is held by tractor beams and is draw towards the docking bay of the lead destroyer. Hera turns back to destroy the Tractor Beam generator to free Sato's ship, but the heavy gunfire causes malfunctions on The Ghost, and it's weapons fail, so Hera bashes the Ghost into the projector itself, causing it to break free, allowing Sato's ship to escape.
Kanan and Ezra take the Phantom to Lothal, easily gaining access to the planet since the Imperial Fleet isn't present, and they head to Ezra's parents house, meditating on the force there, which causes a white Loth-Cat to emerge. Ezra pets it for a few moments before it flees, and they chase it through the streets, but it escapes sitting on the back of a speeder bike. However Ezra reveals he placed a tracking bug onto the animal while he was petting it, and they track it out into the wilderness.
Landing, Ezra claims to recognise the place from his vision, and when they are shot at by the person who was riding the Speeder Bike, Ezra calls out his identity rather than fighting back.
The person stops fighting, revealing himself as a friend of Ezra's parents, and the ex-governor of Lothal, Ryder Azadi. He tells Ezra that he was in prison with Ezra's parents, who heard Ezra's transmission of Rebellion back in "Call to Action", which inspired them to rise up even in captivity, and was the cause of the break out which freed Ryder. However, he reveals that Ezra's parents died in the escape.
Kanan and Ezra return to Ezra's tower, where Ezra has another vision of Lothal not under Imperial rule, a glittering beautiful place, and he is joined by his parents who tell him they are proud of him, and that he should stay strong.
Kanan explains that people can live on through the force, and that his parents will always be with him and the two watch the moons of Lothal set.

High Points : Wow, the battle above Geral is brilliant, with the build up as the Imperial Fleet takes station over the city, numerous Star Destroyers blocking out the sunlight and raining down destruction on the city below. Then as the small Rebel fleet takes off from it's various hangars and slips around the Star Destroyers fighting tie fighters and desperately making for space. It's visually impressive, and some great action.

I never mentioned it at the time, but Ezra's transmission from "Call to Action" was a good one, and worth putting here.

We have been called criminals, but we are not. We are rebels, fighting for the people, fighting for you. I'm not that old, but I remember a time when things were better on Lothal. Maybe not great, but never like this. See what the Empire has done to your lives, your families, and your freedom? It's only gonna get worseĂ˘â‚¬Â¦unless we stand up and fight back. It won't be easy. There will be loss and sacrifice. But we can't back down just because we're afraid. That's when we need to stand the tallest. That's what my parents taught me. That's what my new family helped me remember. Stand up together. Because that's when we're strongestĂ˘â‚¬â€ťas one.

Low Points : This episode is fairly slow, and I have to admit that the search for Ezra's parents didn't inspire any enthusiasm in me. This really struck me as the writers remembering that Ezra was supposed to be looking for his parents, and just killing them off to tidily end that storyline. They're killed off screen, and even though they only died during the events of this episode, they don't really communicate with Ezra except by way of a force vision (and is that really their spirits living on through the Force?, or just the Force showing Ezra what they might have said to him, I totally cloudy on the way it works.)

So what do you really think ? : The episode is fine, and there's an absolutely stunning action set piece in the middle, but the two plots don't merge particularly well, and it's pretty jarring to have this very personal quest of Ezra's taking priority over the survival of the Rebel Fleet under Sato's command.

Final Words : There's nothing wrong with this episode really, it's still quite watchable, but I definitely found that the A-Plot, about Ezra's parents, was of less interest to me than the B-Plot, about the rebel fleet being located by the Empire and attacked by overwhelming Imperial power. Even just writing it down here, makes me think that the B-Plot is massively more interesting to me.
Oh well, I'm pretty sure it's one of my favourites up next, so onwards and upwards.