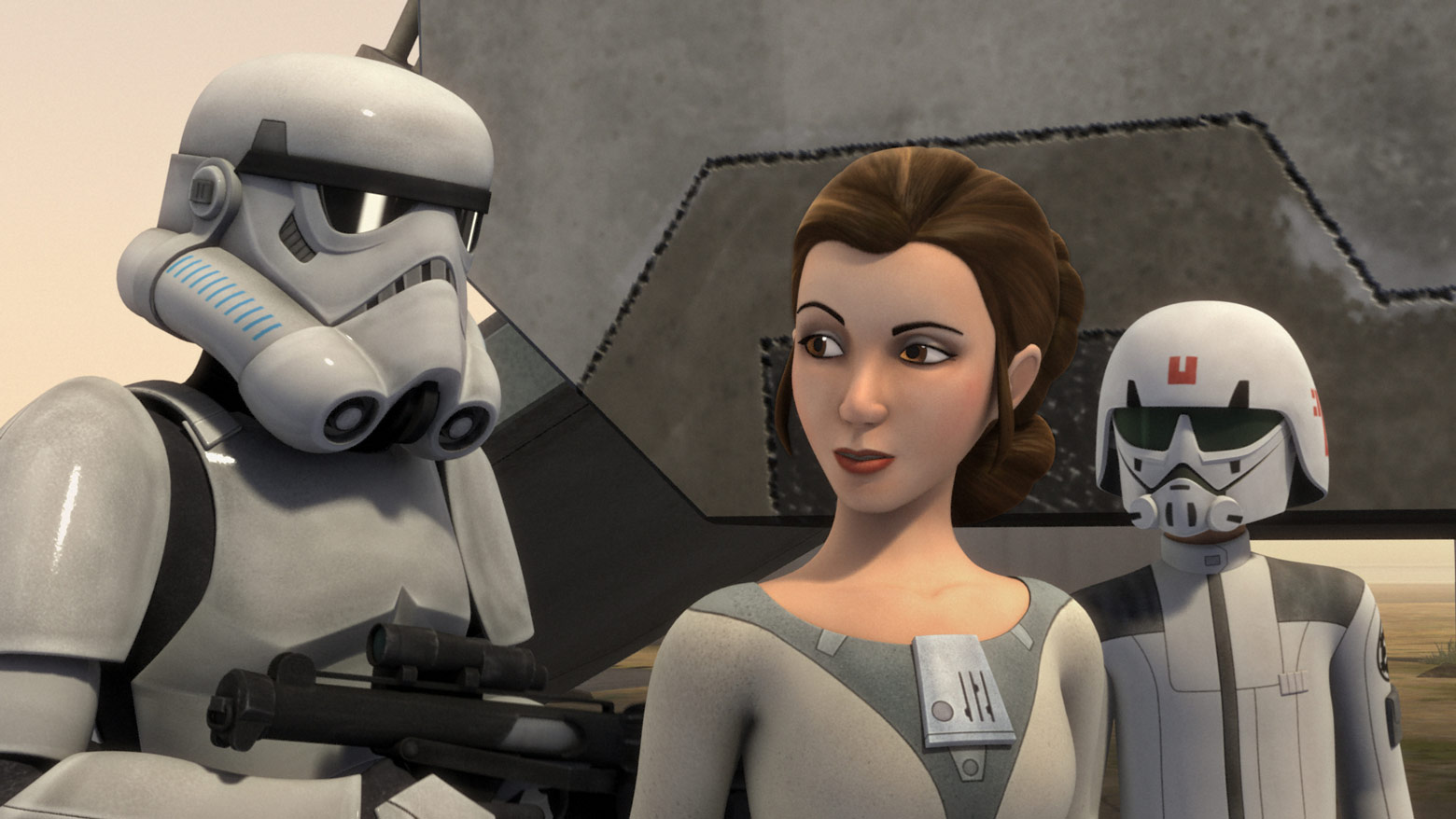 What is it ? : Ezra and Kanan are still at Ryder Azadi's hiding place on Lothal, and Ezra is still grieving the death of his parents when Hera contacts them, Senator Organa has heard of their losses at Garel and is sending them ships to bolster their fleet. Hera wants Kanan and Ezra to rendezvous with Organa's representative.
Meanwhile three ships come out of Hyperspace around Lothal, and aboard the lead ship, Princess Leia Organa tells the Imperial blockade she represents the Senate in bringing relief supplies to the people of Lothal so badly affected by the Rebel activity on the planet.
As the vessels land, Kanan and Ezra disguised as a Stormtrooper and a Cadet. meet with Leia, and she orders them to follow her lead. The Imperial commander orders the ships fitted with Gravity Locks, as he points out Alderaanian vessels have a habit of being stolen by the Rebel Alliance, and he places two AT-AT's on guard.
Leia demands the Commanders shuttle take her to scout for relief sites, and orders Kanan and Ezra in their disguises to escort her. They take the shuttle, and detect activity at Ryders hideout, discovering that Ryder and Chopper have been taken captive. The Ghost arrives, and in the chaos they rescue Ryder and Chopper, and make it look as if Leia is kidnapped by the Rebels, with Kanan and Ezra taken hostage too.
Coming up with a plan, Ryder volunteers to help, and they stage that Kanan has successfully rescued Leia and they have escaped in the Phantom. They distract the Commander, while Chopper and Ryder disable the Gravity locks, and they proceed to steal the Alderaanian vessels, and they shoot and stun Leia to avoid making her look complicit in the the theft of the vessels.
Taking the ships back to the fleet, Ryder now decides to return to Lothal as part of the Rebel Alliance, realising what the Bridgers started is larger than he thought.

High Points : Although this episode has it's serious parts, it's supposed to be a fun little romp to lighten things up after dealing with the deaths of Ezra's parents. In that it succeeds, there are plenty of lighter moments, with Leia giving the Imperials the run around, and some witty moments and comments from the Rebels themselves (Zeb relishing in getting to hit Kanan and Ezra to make their kidnapping look authentic is one that sticks in the mind).

Worth mentioning also is the moment that Ezra and Leia share in the Ghost, where Leia explains to Ezra the importance of his broadcast, explaining to him that they fight for those who cannot fight. It's a nice moment, which helps Ezra rededicate himself to the battle after his loss which could so nearly discourage him from continuing to fight.

Low Points : While keeping the quality I'm used to in Rebels, the story in this episode is definitely one of the weaker ones, bringing in Leia is basically stunt casting, with her presence not adding anything that Senator Organa hadn't already added to the series.

The Imperial Commander in this episode, after starting off being a clear headed individual who seemed to have a firm grip on the Alderaanian shenanigans which are going on (arranging to have ships stolen by the Rebellion, so they can supply the Rebellion with ships without looking complicit in being part of the Rebellion against the Empire), he soon becomes a buffoon, easily fooled and making errors which seem that he should obviously not be taken in by.

So what do you really think ? : This episode felt like filler, and although it provides vessels which will be important later in the series (and may possibly be the same ships which are so important in the Battle of Scarif in Rogue One), it doesn't really add anything to the overall arc of the series. A little disappointing that Leia should be involved in this, and her use feels like them trying to prop up the story by inserting her into it (hoping we're too excited watching her to notice that the whole thing is a little weak).

Final Words : While the standard of Rebels remains astoundingly high, I'm starting to notice that season two is a lot weaker than the first season, there's a lot more padding. However, I must note, that virtually every episode is building the cast of allies and support that the Rebels have. The story is supposed to be about the building of the Rebel Alliance into the credible force it is in the original Trilogy, and in this matter, the series is succeeding in brilliant fashion.