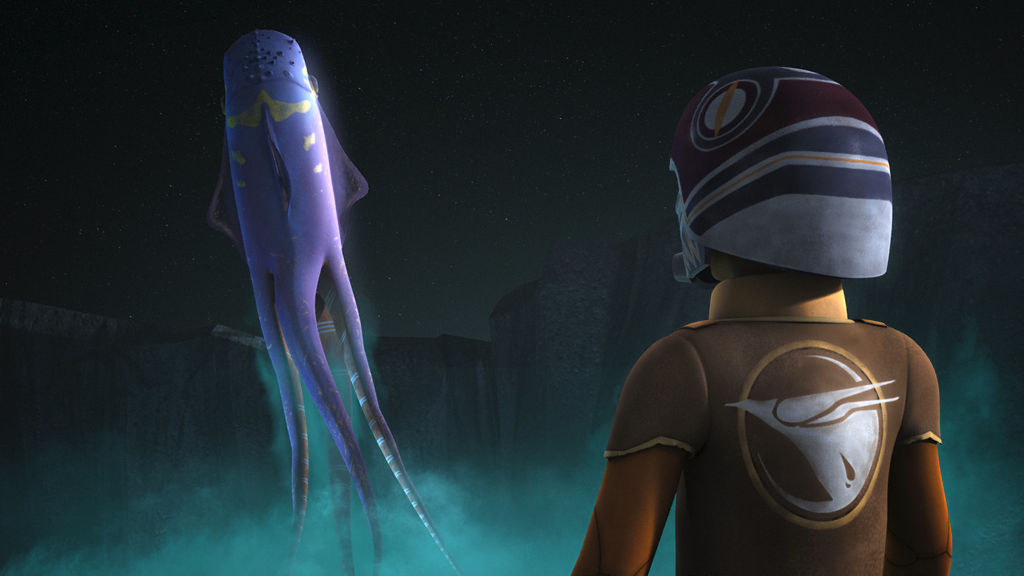 What is it ? : The Ghost has jumped into an Asteroid Belt looking for a fuel refinery, but are down to half a percent of fuel left and have to shut down all non-essential systems including heating. As they all begin to feel the effects of the cold, Ezra hears a mournful cry in his head, and they eventually track it down to a group of Purrgil swimming through space in the asteroid field.
In it's low power mode, the Ghost is battered by the massive creatures as they fly past, so they turn the ship and fly along with the creatures, which leads them to the Asteroid Mining Base they've been looking for, but they are engaged by Mining Guild Tie Fighters, draining the Phantom of it's power to fire the weapons to destroy the Ties.
Without the Phantom to land at the base, Kanan, Sabine and Ezra leap out of the Ghost high above the Mining base, and discover it is using laser cannons to drive off the Purrgil which seem to want access to the huge pool of field the base sits atop.
They take over one of the laser cannons, and Ezra uses it to help Sabine and Kanan secure the landing pad for the Ghost to land and begin refuelling.
Ezra it hit by laser fire, and falls into the gas field, landing atop a Purrgil which is deep in the gas, and loses his helmet, choking on the gas. The Purrgil seems to understand Ezra, forming a link with him and returning his Helmet.
The base deploys Tie fighters, which the now powerless Ghost is not able to fight, but between the Jedi and the Purrgil, they destroy them, giving Hera time to refuel the ship, and for them to take off once again.
They bombard the base, denying it to the Empire, and when they return to space, they see the Purrgil jump to Hyperspace, before following them in fleeing the system.

High Points : The introduction of the Purrgil, and the continuing growth of Ezra's ability to form connections with animals, are important elements in the continuing plot of Rebels. And the episode moves along nicely, getting through the story effortlessly and having all the elements which make this series enjoyable.

Low Points : That said however, the plotline feels inconsequential, with fuel never having been mentioned as a problem before, and being down to half a percent remaining, seems to have no real effect on the story except disabling the weapons for a few moments until they reroute the remaining energy. It feels very much a filler episode, and although I'm aware the Purrgil will prove to be a critical element at the end of the series, they feel disposable, and derivative.
The Purrgil themselves are just space whales, and the cries that Ezra hears are just whalesong (which does sound mournful as Ezra says, but doesn't make any sense otherwise, since whalesong is adapted to travel through water). They even have whalelike heads at the front completing the similarity between the two species, even if their rear halves are more squidlike.
The enemies are forgettable, and the dialogue isn't quite as sharp as it usually is, on the whole this episode disappoints.

So what do you really think ? : I enjoyed this one well enough, but there's nothing here which I found compelling or particularly interesting. It's all a little bland and unimportant.

Final Words : While still a well done episode of Rebels, I'm really feeling as if the longer season two has just led to the addition of a lot of "filler" episodes which weren't really needed to the ongoing story arcs of the series.