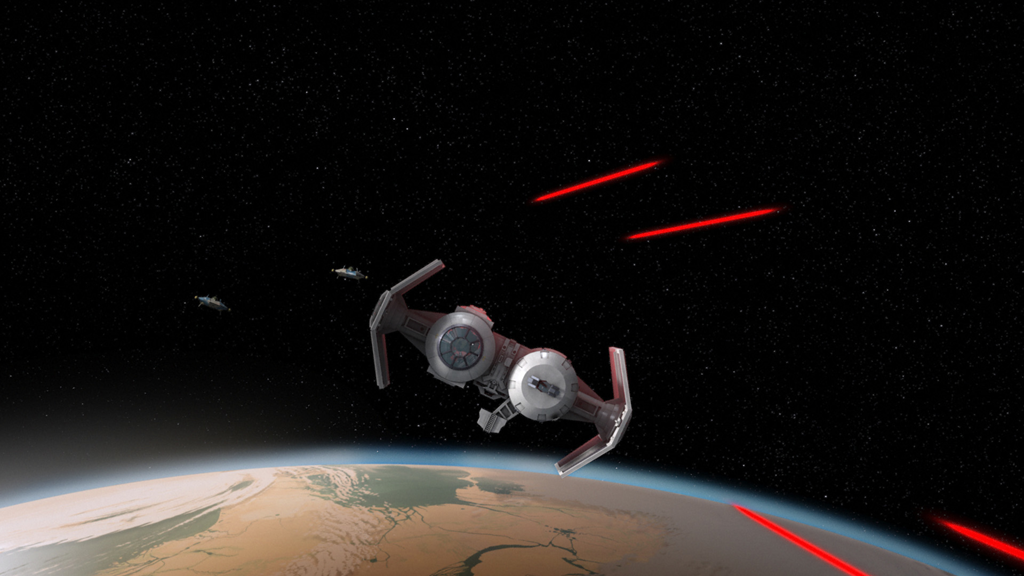 What is it ? : The episode begins with the Ghost and Rebel A-Wings fleeing a Star Destroyer, without a base the Rebels are getting picked off. Communicating with Commander Sato, he tells them that another Rebel cell has alerted them to an Imperial Carrier taking place above their planet, if the Rebels could seize it, they would have somewhere to resupply and repair their fighters. The planet in question is the Twi-lek homeworld of Ryloth, and the cell in question is commanded by Hera's father, the hero of the Battle of Ryloth, Cham Syndulla.
They arrange a rendezvous with the Rebel cell, and Hera has an awkward meeting with her estranged father, but Kanan gushes over the hero, who is only two happy to regale the group with stories of his victories.
Their plan is to send the team aboard a captured Tie Bomber, with the Rebel A-Wing's in pursuit, performing an emergency landing aboard the carrier. The goes to plan, but the impact of the crash landing shakes explosives free from General Syndulla's packs, revealing they plan to destroy the carrier rather than capture it, using the explosion as a symbol to Ryloth that the Empire can be beaten.
The Twi-leks stun the team, who reawaken and set off to stop the ship being destroyed, they split into two teams, with Zeb and Sabine chasing after Cham Syndulla's associates, and Chopper, Hera, Kanan and Ezra heading to the bridge to capture the ship.
Although Zeb and Sabine have problems capturing the Twi-leks, they manage with the help of an Imperial Mouse droid that Sabine modifies with a stun grenade, The other teams mission goes more to plan, with them easily capturing the bridge, and Ezra using the force to convince the captain to issue the abandon ship order. However when they try to jump to Hyperspace, they discover that Cham has sabotaged the Hyperdrive.
Hera speaks to her father, trying to convince him that focusing on just liberating Ryloth won't work against the Empire, that even back during the Clone Wars he used to have the bigger picture, not just wanting to liberate their village, but the entire world, moving on to helping other worlds. This starts to have an effect on Cham, but he is finally convinced when the rest of his team support Hera.
But this seems to be unimportant, as the carriers escort vessel has scrambled teams to recapture the carrier.
The two teams work together, manning the guns while the attempt to reactivate the Hyperdrive, and the carriers returning Tie bombers damage the ship before being destroyed. Finally the escorting Arquitens class cruiser moves into position to destroy them, but the two teams working together load a Tie Bomber with the explosives, and the Jedi push it into the cruiser, destroying it in a massive explosion, providing the visual display that Syndulla had wanted to rally Ryloth.
They fix the hyperdrive, and flee back to the Rebel fleet, and Hera and Cham have somewhat fixed their relationship, with the General gaining a respect for his daughter.

High Points : First of all, I may be unfairly biased on this episode by the fact that it's mainly set on a Quasar fire class carrier, I've always loved these vessels, and used one as the base for my first campaign in the Star Wars RPG, using it as a long range exploration vessel which the players ship was based off. With roomy hangar bays, and room for medical bays and support from troops, fighters and science/engineering, I found it a perfect design for a Star Trek like series of adventures in Star Wars. But back to the point at hand, I loved seeing it in this episode and it put a smile on my face.

Speaking of being happy to see things onscreen, I was overjoyed to see Numa, one of Cham Syndulla's team, she first appeared way back in Season One of Clone Wars, as a child with the Clone Troopers Waxer and Boil. She's all grown up now, and fighting to save her world from the Empire.

There's a lot of action in this episode, and it's great to see some character building going on with Hera, as she's been basically ignored up till now. Also great to hear a little background on Chopper too, and how he and Hera have been together since she was a child.

Low Points : I find it somewhat odd, that even though he expects to blow up the ship, probably killing himself and everyone with him, Cham Syndulla leaves his daughter handcuffed to the controls of a burning Tie Bomber. While leaving the others stunned aboard the burning ship seems a little heartless, it does seem somehow worse to me for him to physically restrain his own daughter inside a burning vessel. It's possible that he has faith that since she's conscious that she'll be able to escape, but handcuffing her to a box nearby would make more sense, just in case.

Given the importance of this mission, I'm a little disappointed at the lack of Ahsoka or Rex. With Ahsoka looking for information on Vader, her absence is easily explained, but Rex has been aboard the command ship in most missions, and his knowledge of Imperial codes and regulations would have helped in the initial part of the mission when they were pretending to be a returning Imperial Bomber. It also missed the opportunity for a character moment for the above mentioned Numa. She has a history with Clone Troopers, and it would have been nice for either she to be torn between Cham Syndulla's plan, and her trust of a Clone Trooper, or discovering how she now has hatred for the Clone Troopers, who once saved her world, then became warriors of the Empire which now has enslaved it.

So what do you really think ? : I enjoyed this episode, it balanced backstory, continuing the plot of the series and action almost perfectly. With the characters growing, moving forward in the Rebellion against the Empire, and enough fighting and action to keep it all entertaining. This all coupled with the sparky dialogue that Rebels does so well, with Kanan getting to act starstruck around Hera's father, and Hera getting to act petulant at the same time.

Final Words : We've been treading water for some time now, with episodes which seem inconsequential in the overall arc of the series, but it's getting towards the end of season two, and I'm looking forward to getting on with the action and progression once more.