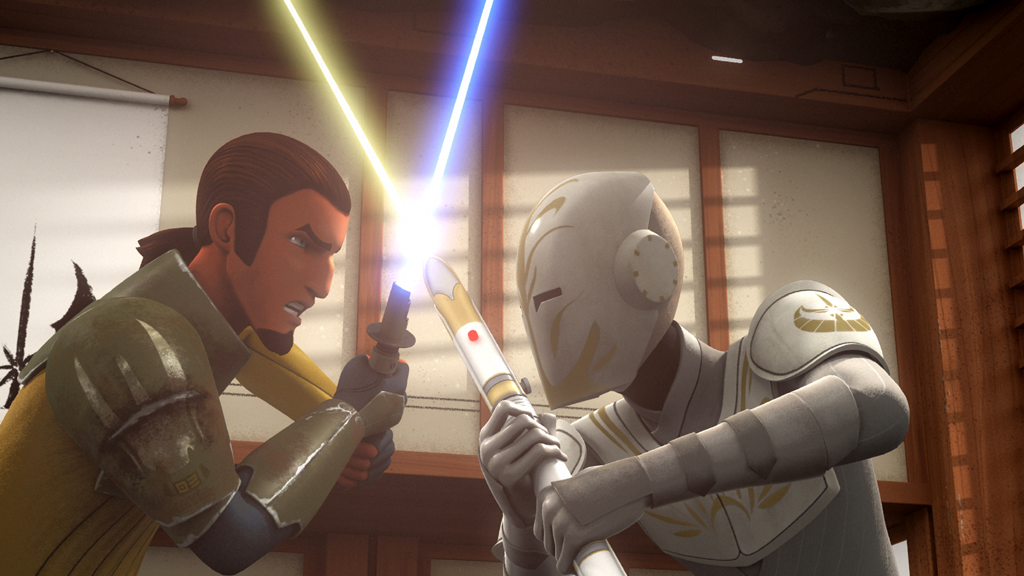 What is it ? : Kanan and Ezra are scouting for a location for a base the Rebel fleet can use, and have been ambushed by the Inquisitors. By working together, and Ezra using his developing link with creatures, they manage to escape, but Kanan is concerned that everywhere they go, the Inquisitors are managing to track them, so the Jedi are actually endangering the fleet.
They head back to the Ghost, and talk with Ahsoka, who briefly discusses Anakin Skywalker with Ezra. When told of the problem with the Inquisitors tracking them, she tells them that in the past she would have talked to Anakin or Yoda to get their advice, so Kanan recommends heading back to the Jedi Temple on Lothal and contacting Yoda as they did before.
Taking Chopper and the Phantom, they return to Lothal and the Temple, but when the Jedi open the temple, it continues to rise, revealing a second entrance.
Inside, they meditate, and Kanan alone sees a glowing doorway, remembering that he and Ezra were separate when they saw Yoda, he goes through the doorway, and emerges in a training room in the Jedi Temple on Coruscant.
Ezra and Ahsoka continue to meditate, she tells Ezra about Yoda, about how he had a hand in training all of the Younglings, and that she remembers him being happy, but filled with sorrow as the Clone Wars went on, as if he knew before everyone how it would end. She then finds herself alone.
Outside Chopper detects the Inquisitors approaching, so takes the Phantom away as they land at the temple. Kanan meets with a Jedi Temple Guardian, masked as they all were, who tells him that Ezra will become an agent of the dark, and ignites his lightsaber to go and kill Ezra. Kanan fights the Inquisitor, to protect his student.
Ezra meanwhile sees Yoda, and talks with him, Ezra asks Yoda if the Jedi Master has the power to destroy Vader and the Inquisitors. Yoda tells him that there were once thousands of Jedi, before they chose to join the Clone Wars. Yoda shows him a vision of clone troopers preparing for battle and Jedi fighting in combat, explaining that, in the Order's arrogance, they joined the conflict too quickly. Fear, anger, and hate gripped the Jedi Order, and the Jedi were consumed by the dark side. Ezra asks if it was wrong for the Jedi to fight or if it is wrong for him to protect his friends. Yoda says that he too fought for many years, because he was consumed by fear. Ezra is surprised that Yoda was once consumed by fear, but Yoda explains that it is a lifelong challenge to avoid bending fear into anger. But the room begins to tremble, and Yoda tells him the Inquisitors have found them. As Ezra stays asking more desperately for help, Yoda tells him to go to Malachor.
Ahsoka sees a vision of Anakin, who tells her she abandoned him and was selfish, that she is responsible for him becoming what he has, and she sees a vision of Vader, finally having to face that Anakin has become Darth Vader.
Kanan cannot win against the Temple Guardian and is knocked from his feet, the Guardian tells him that the servants of the dark side have come for Ezra, and that Kanan cannot fight forever. Kanan agrees that he cannot protect Ezra forever, even from himself, and can only train the boy as best as he can. The Sentinel raises his blade and Kanan prepares for death, but instead the Guardian performs a knighting ceremony and says that, by the right of the Jedi High Council and the will of the Force, Kanan may stand now as a Jedi Knight as once the Guardian had been. The Guardian removes it's mask, revealing it to be the Grand Inquisitor.
The three heroes meet up again, but don't have time to discuss their visions, and flee through the temple looking for an exit, but Ahsoka pauses for a moment, looking back and seeing Yoda. The Inquisitors and surrounded by the vision of Temple Guardians, which distracts them long enough for the Heroes to board the Phantom and escape.
Later Vader arrives, and tells the Inquisitors that their master will be pleases about the capture of the Temple, and upon being told that the Jedi are growing in power, replies that it will be their undoing Meanwhile Ezra tells Ahsoka and Kanan of his talk with Yoda asking who Malachor is, but Ahsoka tells him it is a place.

High Points : There's so much to love in this episode, the training hologram of Anakin that Ahsoka and Ezra watch, matching with the vision Ahsoka receives of Anakin, and confirmation that he is indeed Vader.
Kanan receiving his Knighthood, finally ending his term as the last Padawan, and becoming a Jedi Knight, and the fact that it is the Grand Inquisitor, finally returned to the light, that bestows it upon him.
Then we've got Ezra's talk with Yoda, and the introduction of Malachor into the series, which of course made me squee, since I've played Knight of the Old Republic II: The Sith Lords, and recognised it's name.

And we've got Ezra learning more about Yoda, before seeing him for the first (and last time), Ahsoka recognising that Yoda knew of the falls of the Jedi before anyone else, and Yoda now recognising the reasons that the Jedi fell.

But before all that we've got a great action scene between Kanan and Ezra, and the two Inquisitors, with Ezra's powers emerging to an ever greater degree, and his ability to connect with creatures astounding even Kanan. The way the two fight together is excellent, and the last couple of episodes has shown how they use the force to hurl each other around, working as a team far better than we've seen Jedi do before.

Low Points : My only real criticism of this episode is that it's over all too fast, that we'll never see the Grand Inquisitor, or Yoda again in this series and although the heroes receive some guidance, they're now on their own again.

So what do you really think ? : I loved this episode, it was great to see Yoda and Anakin, even briefly, and the return of the Grand Inquisitor, now returned to the lightside was an unexpected but amazing twist, and the fact that it was he that makes Kanan a Jedi Knight was satisfying in a way I never expected.

Final Words : Well, we've been given the clue to the next step in the storyline, but the heroes won't follow it for a couple of episodes yet, but this is a major step along the plotline of this series, and taking the heroes towards their destiny.