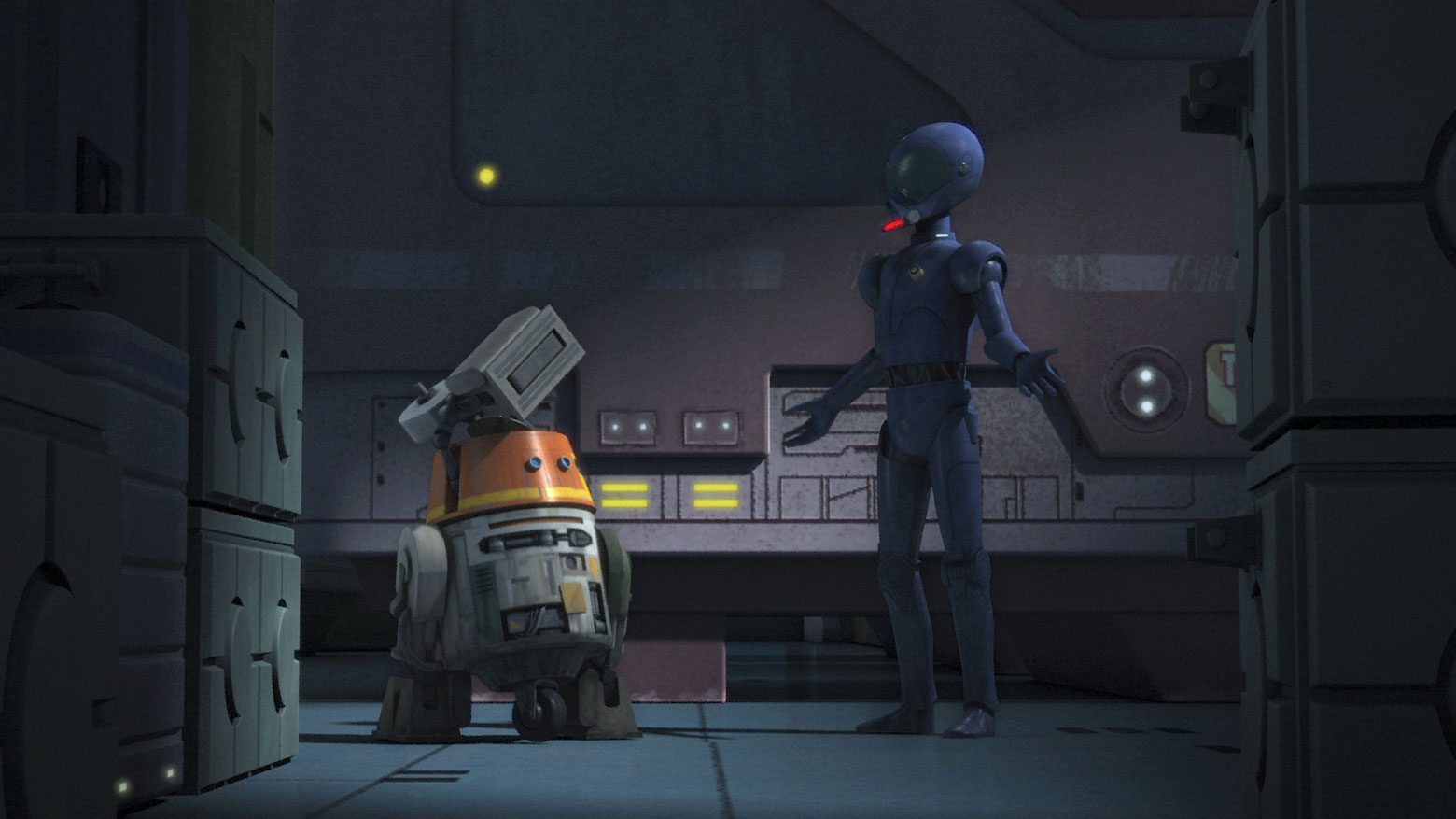 What is it ? : The Rebel fleet has located a potential site for the base, with it's coordinates being provided by Sabine's old bounty hunting partner, Ketsu. However the carrier they are using doesn't have sufficient fuel to make the hyperspace jump to the system. The heroes are assigned to get fuel, although are warned that security is tighter than it used to be, so they travel to Horizon Base, a massive trading post used by the Empire.
Chopper is ordered to stay with the Ghost and warn them of any Imperial activity, but spots a replacement leg on a nearby traders stall, one that matches his original design rather than the mismatched one he currently has. Disobeying Hera's order, he heads over to the stall to barter for the leg, but when his bartering is fruitless (since he has no money), and he sees the Ghost lifting off and fleeing, he steals the leg anyway.
Chased by Stormtroopers for his theft and possible connection to the Rebel activity in stealing the fuel, Chopper ducks aboard a massive transport vessel to escape the planet.
Aboard he is discovered by an Inventory Droid, AP-5, but when he threatens it with his spark projector, it recognises that he was once a military droid, as only those are armed with that particular weapon. The droid reveals that it was also part of the campaign on Ryloth during the clone wars, and that it was an analyst droid, but now is considered useless and relegated to inventory work. Chopper tells it of being assigned to a Y-Wing fighter that crashed, and being repaired by Hera who has cared for him since.
The two droids working together trick the stormtroopers into the cargo bay, then jettison it, and steal the ship knocking the captain unconscious.
The Ghost returns it to the fleet, and finds it under attack by a Star Destroyer and it's supporting vessels. With the support of Ketsu, they manage to board their carrier and begin to refuel it.
Chopper contacts them to get the location to return to the fleet, and they tell him they're about to depart for the system they intend to make their new base, Yost. AP-5 informs them that it's a trap and that an Imperial Fleet is awaiting them there. Scanning their database, and the Imperial one aboard the transport, he begins to transmit the location of a new site for the base, but the captain reawakens and shoots him before being knocked unconscious once again by Chopper.
The fleet trusts in Choppers new friend, and makes the Hyperspace jump to the safe system, and AP-5 reawakens as Sabine uses parts from the leg Chopper stole to repair him, and the two droids leave the room squabbling.

High Points : The transport ship much of the episode is set aboard is an impressive design, large and cavernous, with massive cargo bays, and towed cargo containers. It also has a profile very reminiscent of other Imperial designs, with a triangular dark grey hull, but taken to being just a transport vessel.

Also I was massively impressed with the design of Horizon base, with it's docking towers for transport vessels, and deep city wells reaching down into the surface of the planet, I wanted to see more of this place, but it's brief appearance definitely made the galaxy appear much larger.

But the core of the episode, with the two droids employed by opposite sides, one appreciated and part of the team despite his behaviour, and the other obedient and hard working, insulted and likely to be scrapped. Both of them veterans of the same war, and of the same side, but one side still holds the ideals of the Republic they served, the other is it's inheritor in name only.
Watching AP-5 swap his loyalties is rewarding, as it's the behaviour you hope for, but makes complete sense for him to do given the context of his treatment by the Imperial crew of the transport.

Low Points : This is a Chopper episode, set in motion by him once again disobeying orders and abandoning his post, while the team are in the middle of a dangerous mission, all to get a replacement leg. While the episode is supposed to show his growth (or at least his core values) when he sacrifices the leg he coveted throughout the episode to be used for repairing his new friend, it's hard to understand how the crew would trust him so readily when he repeatedly puts them in danger for selfish purposes (sometimes just for practical jokes and his own amusement).

So what do you really think ? : It's a solid episode, which looks extremely pretty, and although the premise really annoyed me (Chopper screws the team over to get new leg, but it all works out okay), I enjoyed the episode and the tone of the episode really felt right.

Final Words : While the series has treated getting a base as really important, I don't think they've explained it's importance within the context of the show. Why would they want to be tied to one place, when they can use the carrier as their base of operations and move it around constantly to avoid detection. With a base, as soon as it's been detected, it's been lost, which seems a real tactical mistake.
I kind of want to see more attacks on the Empire, rather than them struggling to find somewhere to hide!