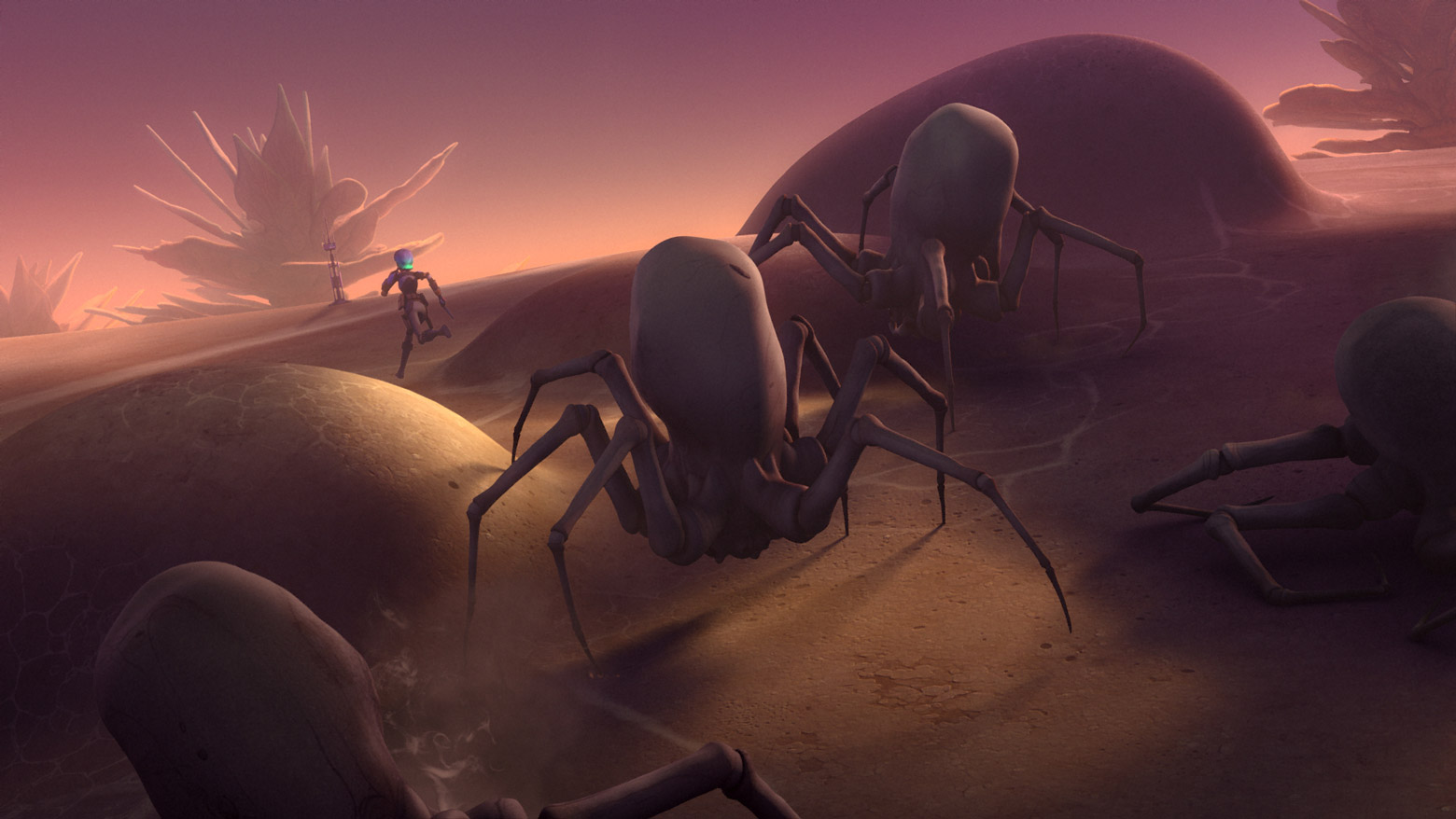 Star Wars Rebels: Season 2 Episode 20: The Mystery of Chopper Base

What is it ? : The Ghost is helping the Rebel fleet set up their new base on Atolllon, meanwhile Kanan and Ezra are training hard as they are about to depart for Malachor where they are not sure whether they're going to return.
Work continues setting up the base, and Ezra goes to see Zeb, discovering him sitting outside enjoying the sun listening to music. The two discuss how Ezra and Kanan are about to leave, and may not return, but Zeb tells him not to think that way. They'll come back, and they'll defeat the Empire, so they'll be able to sit and swap war stories.
As part of the process, the Rebels are setting up sensor beacons around the base to detect any approach, but one of the pilots is ambushed by giant spider-like creatures and doesn't return. When their absence in noticed, Rex and Sabine are dispatched to investigate. They discover the missing pilots A-Wing, and are ambushed by the spider creatures, which seem immune to blaster fire, Rex is captured and carried off, while Sabine manages to hold them at bay with her blaster at the beacon.
The Ghost arrives with the rest of the Spectres, and they drive the creatures off, following them into their nest. They reach a split in the tunnel, and decide to split their group, but while most of the team want a Jedi in each half, Hera orders Kanan and Ezra into one half, while the others are all in the other half, as they will need to get used to operating without the Jedi.
They locate Rex, and join back up, fighting their way out of the nest, only to discover when they board the Ghost that it has been webbed down and cannot lift off. They head back outside, Rex defending the ship, to cut the ship free, but Sabine realises that the creatures did not attack her when she was at the beacon, and that the creatures do not approach it.
Kanan and Ezra use the force to catapult Sabine to the beacon, and she brings it back and they use it's cover to cut the ship free of the webs using their lightsabers. before boarding once again and returning to the base.
They create a ring of beacons around the base to protect it from the creatures, and witness it working, and Kanan approaches Hera to discuss her reaction to Kanan's plan to go to Malachor. She always thought they'd fight the Empire together, and when he reassures her they'll be fine, she tells him she always knew when he was lying. Kanan once again reassures her that they'll see each other again . . .

High Points : The giant Spider-Like creatures while being the main challenge of this episode, aren't the heart of it, with the approaching departure of Kanan and Ezra from the group, to deal with the threat of the Inquisitors, or never return (as the Inquisitors are using sense force on the Jedi to track the Rebel fleet). The heart of the episode is two main relationships, the one between Ezra and Zeb, the two characters who were once so antagonistic towards each other are now brothers in battle. Zeb is happy to share his quiet time with Ezra, when once he would have disliked the intrusion into his space, he's comfortable spending time with the boy. Offering him advice, and boosting his morale, where Ezra's training with Kanan has had a sense of doom to it, his time with Zeb is relaxing and filled with humour and friendly rivalry.
The other relationship is of course Hera and Kanan, the lovers have always been the parents of the Spectres, and have faced down the Empire together. And while it makes complete sense for Kanan to leave to help protect Hera and not draw danger to her, she is vulnerable and fearful of facing the future without him.
The moment that Kanan and Hera spend together is beautiful, and having seen all of Rebels before, doubly touching as this is the last time he will ever see Hera before the end. . .

Low Points : The episode feels a little inconsequential compared to what's just happened, and what is about to happen, but it's nice to spend a moment on emotions before the storm. And the action is decent throughout, so I've no real complaints to tell the truth.

So what do you really think ? : Another solid episode, with some good action, and interesting story to tell, and some real emotional heart. What's not to love?

Final Words : Well, the big two part season finale is next, and I think I'll review it all together, as I'm not sure I could bare to only watch half of it.