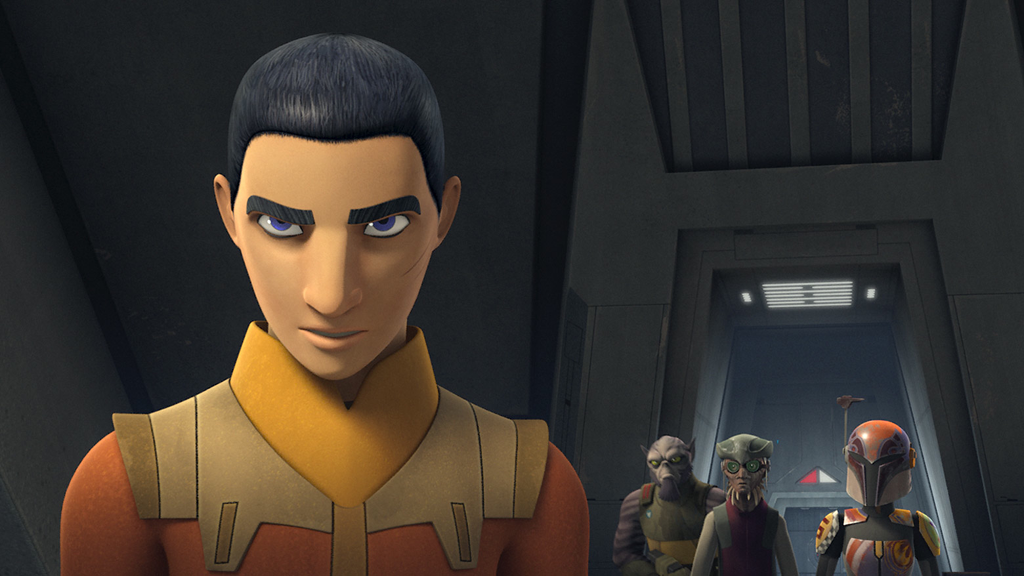 High Points : Ezra continues his journey towards the Dark Side, and his need to protect his friends is far more believable a journey than Anakins, while he is becoming an angrier person, and his overconfidence is becoming a problem, he is motivated by a need to avoid what happened to Kanan happening again and a want to help others.
Hondo returns, and as always is as funny as ever, this time he's not in full comedy mode however, and just gets a bunch of good lines, but is a welcome addition to the episode. He also is extremely useful to the team during the mission, bringing the Ugnaughts onto their side, even if he does prove to be as untrustworthy as ever at the end by abandoning the mission as soon as he gets a ship.
Finally, the introduction of the Bendu is an interesting one, voiced by the Fourth Doctor himself, Tom Baker, he provides an interesting view into the force that we've not really seen before. Although Ahsoka seems to be a Grey Jedi, she's still unarguably good, as the Bendu appears to be, but we'll see if that holds up in the future. I love the fact that he uses the terms from the original scripts for Star Wars that George Lucas used, Ashla, Bogan & Bendu. I know I'm a total fanboy, but using these terms adds a certain gravitas to the names, as if they're actually names from history, instead of just something that someone made up (even if that's what they really are).

Low Points : Ezra and Kanan's relationship is at a low point, Kanan feels useless, and Ezra needs guidance now more than ever, feeling rejected by Kanan as if he failed him. Ezra has been leaning on the Sith Holocron as a replacement teacher, and his journey towards the dark side has been continuing, which since it's been foreshadowed since the beginning of the series is brilliant. However, Kanan and Ezra seem to patch up their relationship so easily. Kanan rescues Ezra, as they have done on a regular basis for each other since the start, but Ezra's trek towards the dark side seems to be pretty much completely reversed, and every one is friends again. It just seems a little easy, and the only repercussions for Ezra's Dark Side flirtation is a severe new haircut and wardrobe.

So what do you really think ? : I really enjoyed this episode, and while the B-plot with Kanan didn't mesh well with the A-plot about stealing the Y-Wings, it was all very enjoyable, and the extra running time just zipped by.

Final Words : We're starting to get to episodes which are only a couple of years old now, and my memories are much clearer of them. I remember the introduction of the Bendu, and being excited to see a new view of the force from the centre. Knowing that the Jedi must be gone by the end of the series, to make Luke Skywalker truely Last of the Jedi, and thinking that perhaps Ezra and Kanan might learn the ways of the Bendu, and therefore not be counted as Jedi any more. But sadly, that is never to be, and the writers decided to clear Ezra and Kanan off the game-board in another fashion.