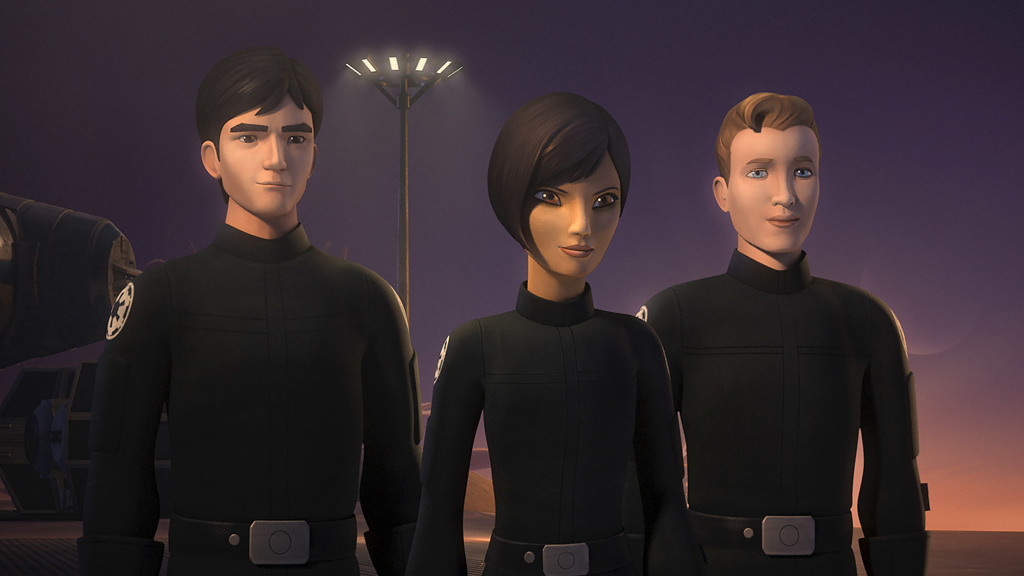 What is it ? : The Rebel A-Wing Squadron is escorting a transport vessel, when they come under attack from an Imperial Cruiser and its fighter escort. After the A-Wings are defeated, the Tie Interceptors attack the transport which calls on them to break off their attack as they are unarmed. The Tie's attack anyway and destroy the transport, killing all aboard.
The Rebels meet with Commander Sato, who reveals that Fulcrum has revealed that some Imperial Cadets are ready to defect. Ezra is excited that Ahsoka is back in touch, but Hera reveals that Fulcrum is just a code name and is now used by another contact within the Empire.
This is usually the type of mission that Ezra would attempt, however he has become too well known, so Sabine is assigned instead, with Kanan and Ezra waiting to perform her extraction.Sabine is inserted to the Imperial academy without incident, and begins simulations, and during one where they are asked to destroy a civilian transport, she notes the students who do not agree with these actions, which are against even Imperial regulations.
She contacts three of the students she is sure are the defectors, and meets with Wedge Antilles, Hobbie and Rake Gahree, telling them she will come up with a plan to get them out.
Governor Pryce and Agent Kallus arrive at the Academy since they've heard that there are defectors, and they lock down the Academy. However when they fail to locate the defectors, they decide to send the cadets on a training mission to try to detect them. The cadets take their fighters into space above the Academy for a skirmish, and Sabine calls for Ezra and Kanan to come for the extraction, however their Tie fighters have been rigged, so as soon as they attempt to escape, their solar panels are jettisoned and they just begin floating in space, and the extraction is cancelled when their ship comes under heavy fire from Tie Interceptors and Rake is killed as an example to them.
Sabine, Hobbie and Wedge are interrogated, but Sabine escapes from her bonds, and defeats the guards in the room, slipping out to rescue the other 2. They head for the fighter bay, but are locked in by blast doors, which Agent Kallus frees them from, telling Sabine to tell Zeb that now they are equal.
They steal a Tie Bomber, and Ezra and Kanan return to rescue them, they manage to dock and escape into Hyperspace just before they come under attack again, and Sabine delivers the two pilots to Chopper Base where they are welcomed to the Rebel Alliance.

High Points : There's some good space combat action in this episode, and Governor Pryce shows she is a wily and intelligent opponent, luring the defectors into revealing themselves. We also get Agent Kallus's continuing redemption, as he helps the heroes, to help balance the scales between himself and Zeb, and we get Ezra continuing to recover from his flirtation with the Dark Side, still being impatient and impulsive but obeying Kanan's instruction once again.
It's nice to see the Rebels get away with infiltrating the Empire again and again, because they wear helmets all the time, which is a nice touch.

Low Points : Again we've got a power difference in ships in Rebels, once before we saw Darth Vaders Tie fighter taking out Rebel capital ships with ease, and in this episode we get Tie Interceptors taking out a Corellian Corvette with relative ease, leaving it only moments from destruction when it escapes into Hyperspace. The idea of fighters doing this level of damage to much larger ships kind of goes against Star Wars, where small fighters usually dogfight around much larger ships, which themselves duel with other larger vessels.


So what do you really think ? : Although I didn't really engage with this episode, it was enjoyable enough, Sabine is a capable character, if not the most entertaining to watch, and although they made a point of her being in the Imperial Academy so knowing how to fit in, nothing really was made of this. It might have been nice to have a subplot about flashbacks to what made her leave the Empire originally or her time with them.

Final Words : All in all it's a bit of a disposable episode, which could fit in at almost any point during the series, there's nothing really within the plot of this episode which means it couldn't have occured during the first two seasons, and for that reason it feels fairly pointless, if enjoyable.