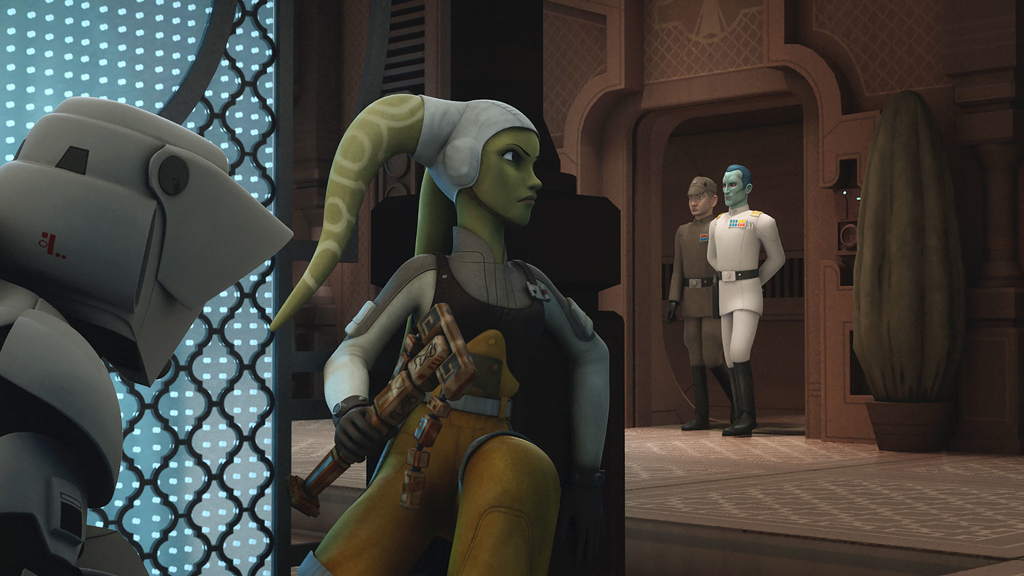 What is it ? : Cham Syndulla and Nomi are riding Blurggs across Ryloth being chased by Imperial forces, Cham comments that the Empire has become better at anticipating their moves later, when Hera contacts them and pilots the Ghost low enough for their Blurggs to leap aboard, as does a Speeder bike and it's rider.
They discuss what's been happening on Ryloth since they last visited, and Hera discovers that the Empire has seized their ancestral home to use as a headquarters, while the building does not bother Hera, she realises that the Kalikori, a Twi'lek symbol of family, added to by each generation is still within the home. Hera decides that she is going to sneak in and retrieve it, and the team volunteers to help.
Ezra takes the Scout Troopers uniform and bike, and pretends that Hera is his prisoner to gain access to the building, and they easily manage to get to Cham Syndulla's old office and retrieve the Kalikori. They discover the building is very secure, and try to sneak out the front door, getting Chopper (painted in Imperial colours) to distract the guards, however Hera encounters Grand Admiral Thrawn entering the building, he recognises she is carrying a Kalikori, that they are valueless to anyone outside the family, and that she is Hera Syndulla. Ezra tries to ambush them still in his Scout Trooper uniform, but Thrawn also deduces that Hera is not alone, and stuns Ezra easily.
Thrawn talks with Hera, mentioning how he has studied war, but she has lived it all her life, and how he is going to take the Kalikori and add it to his collection. Hera wishes she had destroyed it, but Thrawn questions whether she values her history so lightly.
Thrawn returns to his cruiser hovering over the Ryloth desert, and the Imperials contact Cham Syndulla, offering a prisoner exchange, him for his daughter. Cham agrees, but during the exchange, Hera and Ezra manage to excape after getting Chopper to plant explosives to cover their attempt, and they all flee aboard the Ghost. Thrawn orders his ship to allow them to leave, as they deserve their victory this day.

High Points : Thrawn, that's what's best about this episode.
His voice acting is awesome, so cold and dispassionate most of the time, such a flat portrayal makes him far more intimidating than all the lightsaber twirling Inquisitors we've had. And the way they've written his intellect is believable and makes him all the more impressive, his deductions of who Hera and Ezra are, make total sense and again elevate the danger of this character.
Thrawn comes across as the most dangerous opponent the Rebels have encountered, he is patient, he isn't easily distracted, and he makes sure he is informed on his enemies.
Everything about his characterisation is amazing, in fact the only thing which seems to upset him is stupidity, which he is all too readily surrounded with in the Empire.

It's nice to see Cham, Numa and Gobi return as allies, and somehow develop as characters despite everything else which is going on in this episode.

Finally, I adore the character moment Chopper gets when they return to the Syndulla family home, where he sees the Y-Wing that Hera rescued him from, the wreckage causing him to pause. Although you aren't told what he's doing, but I personally got a feeling he was grieving for the loss of his original owner, the pilot of the Y-Wing, probably a clone trooper, who died in the crash.

Low Points : The escape from the Imperials feels a little easy, although I find it hard to criticise it too much, since Rebels wandering an imperial base in disguise, is exactly what happened with Han, Luke and Chewbacca aboard the Death Star in A New Hope. Chopper plants explosives without any opposition, even though by now the Empire must surely know that the Spectre's have a droid which works with them, often in disguise as an Imperial droid? I'm pretty sure there's an episode which deals with exactly that point coming up, but I wanted to point out it's already becoming a problem in the series.

So what do you really think ? : It was an easy episode to watch, with many good scenes, although Thrawn's first interaction with the heroes dominates this episode and impresses, however there doesn't seem to be a whole load of substance to the episode. and it would generally be one you could skip if you're watching through the series.

Final Words : I remember the next episode, and am quite hyped for it as I remember it being a brilliant one, I hope it lives up to my recollections.