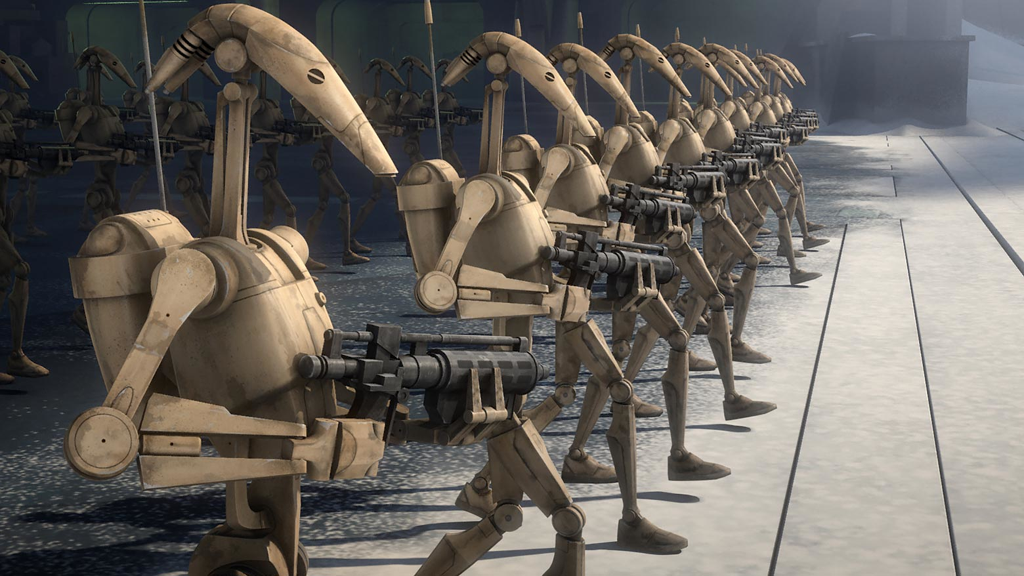 What is it ? : The Rebel fleet is scavenging for supplies, Hera and Sabine are to get fuel, and Kanan, Rex, Ezra, Chopper and Zeb are to scavenge the wreckage of an old Separatist ship for Proton Bombs. Hera and Sabine drop them off on Agamar before leaving for their own mission, and the group enters the ship quickly finding a large supply of proton bombs, but they set off a ray shield trapping them inside, and all of the group except Chopper are captured by some Battle Droids.
They are stunned, and reawaken on the bridge of the crashed vessel, where a Super Tactical Droid named Kalani makes arrangements to finish the Clone Wars in a way satisfactory to him. Keeping Zeb as a hostage since Lasat were not involved in the Clone Wars, he wants them to take part in a classic Jedi hostage rescue as played out so many times in the Clone Wars. Rex and the Jedi will attempt to re-enter the vessel and rescue Zeb, Kalani and his forces will attempt to stop them, allowing him to see whether his calculations were right and the Separatists should have won the Clone Wars.
The group are escorted outside, and the wargame begins, with many dozens of Battle Droids attacking them, Kanan and Ezra deflect the incoming blaster bolts, while Rex picks off targets with his own weapons, and destroys groups with well placed grenades, and they quickly gain access to the ship once again.
Inside, they are pinned down by fire from some Droideka's on a walkway high above the hangar. While Rex and Kanan keep the Droids distracted, Ezra moves away towards a crane to take out the platform they are on, but becomes distracted as Chopper reveals he has called for help, and is repairing a Sheathipede Shuttle he has found for them to escape in.
Meanwhile, Sabine and Hera have completed their mission, but are being chased by the Empire because it was a trap organised by Governor Pryce, Pryce and Agent Kallus detect Choppers distress signal coming from Agamar, and order Imperial forces to go there and deal with the Rebels.
Ezra uses the force to move the crane, and it takes out the platform and the Droidekas, and the group deals with another couple of small traps before they reach the bridge. There is a standoff, as Kalani has a Battle Droid with it's weapon aimed at Zeb's head, but Ezra explains how neither side is thinking about the Clone Wars and who really won it. The Clone Troopers were retired and replaced, the Battle Droids were deactivated, both sides were tricked and didn't win, and that it was the Empire who is the enemy of both, and they observe outside the crashed ship as the Empire drops forces onto the planet in the form of AT-DP's, AT-AT's and Stormtroopers.
Kalani explains that no state of war exists between the Empire and the Separatists, so he cannot get involved, but he will investigate the Empires reason for being here. Sending some Battle Droids to speak with the Stormtroopers, they are destroyed almost immediately, allowing Kalani to act against them.
They come up with a plan to escape using the Shuttles in the Hangar, but these would be destroyed by the Walkers, so they use the Proton Bombs as mines, detonating them using Blaster fire from the Battle Droids, redirected more accurately by the Jedi.
They take out enough of the Imperial forces to flee, and as they exit the System, Kalani tells the Rebels they only have a 1% chance of defeating the Empire, and they must now go their separate ways, although Ezra is congratulated for doing what armies and a galaxy of Senators could not do, end the Clone Wars. They rendezvous with the Ghost, and let Hera and Sabine know they've found a replacement for the Phantom, but it needs a paintjob.

High Points : I would like first to bring up Kalani's History, and the brilliance of the interconnected nature of The Clone Wars and Rebels series. Kalani last featured in the Onderon Series of episodes during season 5 of the Clone Wars series, where he was commanding the Separatist forces on that world, killing King Rash when he was ordered to abandon the battle to control the planet against Saw Gerrera and his forces. Count Dooku ordered Kalani to retreat to Agamar, where we now find him. I love that this is tied together, not only do we get a returning character, but we also get him exactly where we were told that he would be.

Although I don't like the amount of credit Ezra gets for his realisation that both sides in the Clone Wars were merely puppets and didn't stand a chance of winning the Clone Wars, they were merely setting the scene for the emergence of the Empire. I do like the fact that the two sides are able to come to an agreement to end the Clone Wars once and for all.

Minor things can really amuse me, but I adored the fact that Ezra makes the childish joke that probably everyone has made over the years when the Battle Droids say "Roger, Roger", and Ezra replies "Who's Roger?". I laughed for a solid 5 minutes and had to stop the episode until I stopped.
Speaking of humour, I adored Kalani's sense of humour, accusing Zeb of joking when he tries to talk him into surrendering, laughing mockingly afterwards as if what Zeb is saying is a joke. It amused me to see a Tactical Droid doing the equivalent of the slow handclap.

Low Points : This may not be a low point, but it's a little moment of confusion for me. Early in the episode Rex, Zeb, Kanan and Ezra are trapped by a Ray Shield. My understanding of Star Wars was that there were two types of shield, Particle Shields, and Ray Shields. Ray shields protect against Rays, so deflect blaster bolts and laser weapons but physical objects pass through unaffected, which is why although the Death Star has massive shields the X-Wings can fly through them to attack in A New Hope, or the Millenium Falcon can dock on the outside of the Star Destroyer in The Empire Strikes Back. Particle Shields stop particles, so can stop missiles and have to be lowered to allow shuttles to leave, etc.
Which makes me wonder how the heroes couldn't just walk out of this trap, or am I totally misunderstanding the situation.

So what do you really think ? : An amazingly good episode, a great situation, with witty dialogue, good action and a lot of history within the series, a real high point of this season.

Final Words : I can't remember Kalani and his remaining forces returning during the run of Rebels (although I could be wrong, my memory isn't the best), which is a pity I would like to have seen them return to take part in the battle against the Empire, but perhaps this is still to come. I'd be amused at them turning up out of nowhere to help defeat the First Order in Episode 9, to really defeat their enemy. There's no chance of that happening, but perhaps we'll see them again in Star Wars: Resistance.