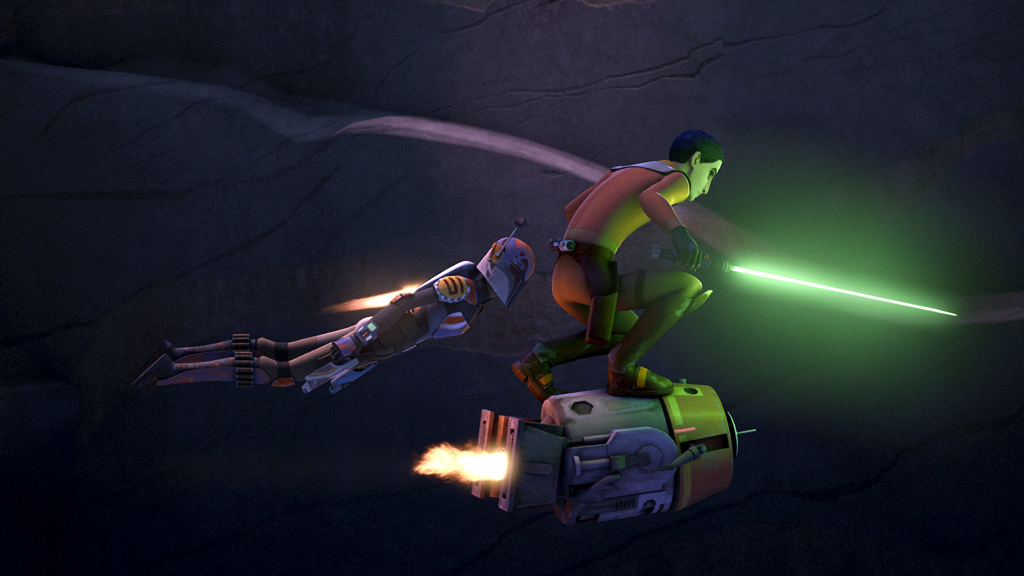 What is it ? : Sabine is in the jail cell playing a game against the captured Mandalorian leader, Fenn Rau. She is trying to convince him that the Empire is worth fighting against, but likewise he is trying to convince her that she should join him in looking out for the Mandalorians. Zeb arrives to get them both to attend a briefing, communications with the Mandalorians in Concord Dawn has been lost. Sabine, Ezra, Chopper and Fenn Rau are dispatched to discover what has happened.
While they are distracted during the journey, Fenn Rau stuns them both, and takes the Phantom II to the Mandalorian base, which has been destroyed. As they watch, they are spotted by an Imperial Probe droid, which they deal with.
However, a group of Mandalorians respond to the destruction of the droid, these Fenn Rau identifies as Gar Saxons clan, which serves the Empire. The Mandalorians capture Chopper and Ezra, who uses his Lando Calrissian identity to claim to be working as a scavenger for Hondo Ohnaka, but Gar Saxon doesn't believe him and threatens Chopper forcing Ezra to use the force to protect the droid, revealing himself to be a Jedi.
Fenn Rau liberates the Phantom II, and Sabine uses smoke bombs to cause a distraction and get Ezra and Chopper out, however as they run for the Phantom II, it lifts off and Fenn Rau abandons them.
Knowing the Mandalorians arrives aboard a ship, Sabine using a captured Jet Pack carries Ezra, while Chopper follows using his own thruster. They are chased by the Mandalorians using their own Jet Packs, and a running battle occurs until they arrive at the Mandalorian Ship.
However, they crash to the ground under fire, and disarmed Gar Saxon captures them again. Just in the nick of time, Fenn Rau returns with the Phanton II, destroying the Mandalorian ship, and causing a distraction for them to leap aboard the vessel as it flees.
Fenn Rau is impressed by Sabines willingness to die for her friends, telling her that while the Mandalorians have forgotten the old ways, she has not, and he is willing to join her and the Rebellion.

High Points : She's been wanting one since virtually the beginning of the series, but Sabine finally gets her Jet Pack, becoming a traditional Mandalorian finally. And while everything else in the episode is okay, I can't really find too much to recommend in it.


Low Points : During this single episode, Ezra gets disarmed and captured three times. I'm aware this is done to make the Mandalorians appear as powerful enemies who the characters must struggle against. But there was no real feeling of threat to the heroes. I know that Fenn Rau meant Sabine and Ezra no harm when he captures them at the beginning of the episode, but the repeated captures feel more like inconveniences than really putting them in mortal danger.

So what do you really think ? : I have to admit, even though there are going to be a bunch of Mandalorian based episodes over the next couple of seasons, I don't find them that interesting. Clone Wars managed to introduce an interesting concept of the Warrior race trying to reinvent itself, as they were aware of the effects that perpetual warface was having on them and their planet, with Mandalore basically having become a wasteland.
But here we are in Rebels and they've learnt nothing, they're still supposed to be amazing warriors, with some of the best weapons and armour in the galaxy, but they're also supposed to be a crumbling civilisation on the edge of collapse, and we don't get to see any of that.
So I think that is my main problem with this episode, it just rolls out another group of Mandalorians from the never ending list, and this time they're allied with the Empire (instead of allied with Darth Maul or just wanting to bring the old ways back), it's just not that compelling a story as far as I'm concerned. So while the dialogue is still pretty snapped, and the Jet Pack fight is pretty interesting, the episode as a whole kind of bored me.

Final Words : Well, for all my moaning about Mandalorians, this is still a fairly entertaining episode, and if I remember right, the next episode is a right little cracker.