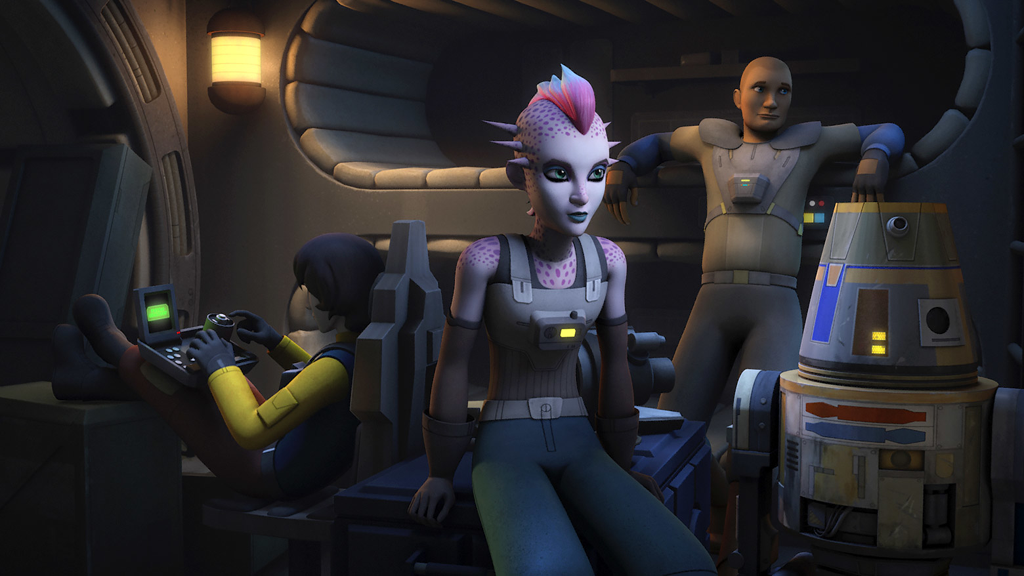 What is it ? : The Ghost has been dispatched with one of the fleets Hammerhead Transports and some A-Wing's as escort to help evacuate Rebel Sympathisers from the world of Mykapo. As they arrive in the system, they detect a YT-2400 in combat against imperial forces headed by a Gozanti class transport, although the Ghost assists in taking out some Tie Fighters harassing the YT-2400, but the YT drops some cargo containers which impact the Gozanti and force it to hyperspace jump out of the system.
Contacting the YT, they discover it is controlled by Iron Squadron, and while they send Kanan and Zeb with all the other ships to evacuate the planet. Contacting Commander Sato to inform him about the situation, he tells them that Iron Squadron was the commanded by his deceased brother, but he has a nephew who might be reusing the name.
They dock with the YT-2400, and discover it is heavily damaged and run by a group of teenagers who have been fighting the Empire. Upon discovering that the ships Hyperdrive isn't functioning, they offer Choppers services in repairing it, but Iron Squadron refuse as they don't plan on running away. Iron Squadron are over-confident and refuse help, and refuse to accept that they may have to retreat when the full might of the Empire arrives to control their planet, as this is their home, mistakenly thinking the Gozanti they've dealt with was actually a Star Destroyer.
As the rebel fleet escapes with the evacuees, Ezra, Sabine and Chopper remain behind with the Phantom II to help Iron Squadron. Although they fail to convince the crew to leave Mykapo, they do manage to get them to agree to letting them repair the Hyperdrive, which Chopper manages, however Iron Squadrons captain deactivates it by diverting power away from the repaired system.
Admiral Konstantine arrives in the system aboard an Arquitens Class Cruiser, which again the Iron Squadron mis-identify as a Star Destroyer, and finally seeing some of the might of the Empire it causes them to consider retreat, they begin to board the Phantom II, but their captain, Sato's nephew, locks the door and jettisons the Phantom II, ordering Ezra to save his crew while he begins an attack run on the Arquitens.
He tries the same attack run on the cruiser as he had on the transport, but the jettisoned cargo containers are easily destroyed by the cruisers forward batteries. His ship is disabled and the TIE fighter escort forces the Phantom II to retreat into Hyperspace.
They inform the fleet what is happening, and they receive a communication from the captain of Iron Squadron that the Empire hasn't destroyed him, but they've attached something to his hull. The Ghost returns to attempt a rescue, and they dispatch Chopper and Iron Squadrons Astromech into space to disarm the mine that the Empire has placed on the hull, hoping to detonate it and destroy not only Iron Squadron but also the rescuers.
This the droids manage, giving the Ghost chance to dock, and Commander Sato arrives in his Corellian Corvette, allowing the Ghost and attached YT-2400 to use the same trick once again, but this time the cargo container augmented by the Mine, manages to heavily damage the Arquitens.
As the Rebels turn to leave, Grand Admiral Thrawn's Star Destroyer , the Chimaera arrives (with Iron Squadron finally witnessing the power and scale of an actual Star Destroyer much to their shock) and Thrawn talks to Commander Sato, saying he wondered what it would take to get him to return to Mykapo, and promises they will meet again as the Rebels flee into Hyperspace.
Sato is reunited with his nephew, and Iron Squadron reaffirms their commitment to each other as the Spectres watch.

High Points : This is a completely space based episode, with all the action happening aboard spaceships which is an interesting choice which works very well.
The one trick that Iron Squadron knows, dropping cargo containers which are presumably loaded with some kind of explosive material is a good one against vessels which aren't heavily armed and cannot destroy the containers before they impact their hull, and Konstantine's plan to mine the hull of a vessel and then destroy it and any rescuers is a solid plan with Rebels who tend to help one another.

Low Points : In my memory I'd really enjoyed this episode, so I'm not sure if my opinion has changed, or maybe I was just in a bad mood when watching it, but Iron Squadron really annoyed me. I totally get that they've had only successes until now so don't really know fear, but the one thing they do fear is being treated as children again if they join the larger rebellion. I can also possibly get that they don't want their ship repaired as it's damage are proud battle scars. But I don't get them refusing their Hyperdrive being repaired, being able to do in system jumps to confuse an enemy is a tactic that they could use to confuse an enemy, and having the option available, really shouldn't be something they turn down.
And while it's a running joke about them thinking each progressively larger ship they encounter is a Star Destroyer, why don't they recognise one? In all the material we've seen for the Empire, they all portray Imperial Class Star Destroyers on the posters/videos/advertising that the Empire puts out, they are rightly proud of the power they show. So Iron Squadron not knowing what one looks like just makes them look stupid.

Finally I know that Thrawn is attempting to put Admiral Konstantine down a few pegs, but dispatching only a single light cruiser to deal with a rebellious system, especially one which the local Rebel commander originates from seems awfully short sighted for Thrawn. If only he'd put a Star Destroyer under Konstantine's command, he'd probably have been able to take out Sato's ship when it arrived, even if the Ghost and Iron Squadron would have likely slipped away.

So what do you really think ? : This episode wasn't as enjoyable on the rewatch as many, and while I can see why the writers made all their choices in writing this episode, the characters behavior annoyed me. Hera wasn't as empathetic as she usually is, Iron Squadron were idiots, and even Thrawn was making poor decisions just to damage a political rival.

Final Words : While I remember enjoying this episode on the first watch, and now I didn't really enjoy it as much. The next episode I don't remember thinking much of, so hopefully I'll like it better this time, and it's a Hondo episode, which bodes well.