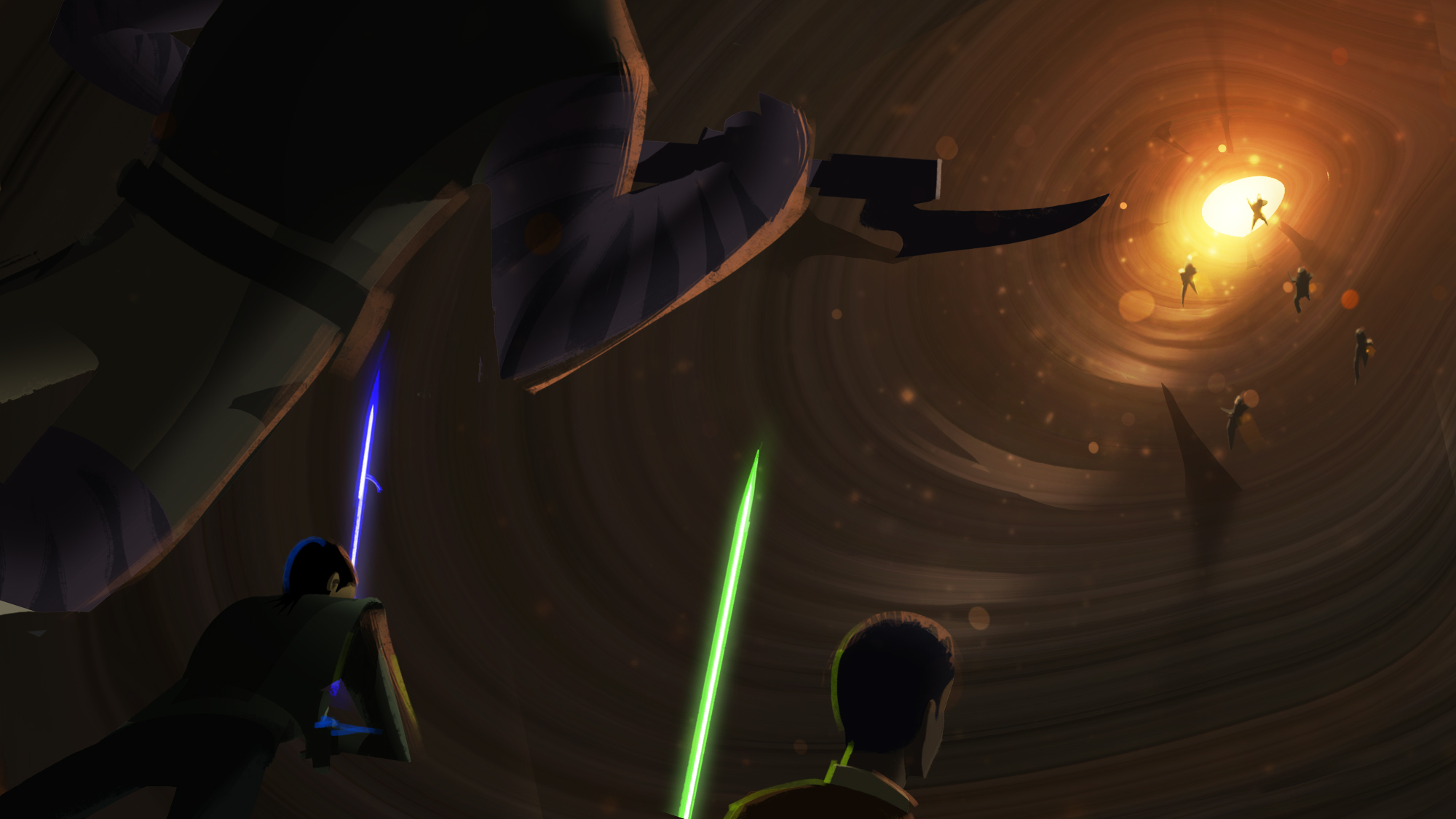 What is it ? : Saw Gerrera roughly interrogates the captured Geonosian, making the rest of the group uncomfortable. They ask Ezra to question it, and it reveals its name to be Klik Klak and he leads them to his home, a room filled with junk and equipment. Saw finds a Geonosian Sonic Blaster, taking that to be the reason he led them here, to get a weapon, but they then discover a Geonosian Queens Egg, and they realise that all he is trying to do is defend the last chance his species has for survival.
Meanwhile in orbit a Arquitens class command cruiser emerges out of hyperspace, having been summoned by proximity sensors they have planted around the planet. They launch two Tie bombers to scout the surface, which locate the Ghost which has not been able to warn those beneath the surface. After destroying the Tie's, they manage to contact the team, who are using communications equipment in Klik Klak's workshop, and decide the best way to evacuate the team will be to bring the Ghost down into the tunnels using the massive air vent they crossed before encountering Klik Klak.
The group returns to the Ghost, where Saw begins torturing Klik Klak with electrical shocks, as Hera questions the deal that Kanan has made with Saw, to take the Geonosian to Chopper base for interrogation, Saw decides he's taking the Phantom II and Klik Klak and the Spectres are too weak. However before he can they come under attack by Jetpack wearing Stormtroopers, and climb onto the hull of the hovering Ghost to defend it.
With the Stormtroopers dealt with, the Ghost moves deeper underground out of range of the Arquitens weapons as it takes up position blocking their exit directly over the tunnel. At the base of the tunnel they discover large pods which released the poison gas which killed the Geonosians, the arguments that the Geonosian is just protecting his people have softened Saw's heart enough that now with alternate evidence against the Empire, he frees the Geonosian who retreats deep into the planet, as the Spectres attach a couple of the pods to the Ghost.
The commander of the Arquitens decides to seal the tunnel by collapsing it, and begins firing their weapons at the rock edge of the tunnel, sending boulders crashing down towards the Ghost. They race back up the tunnel, using their turrets to destroy the larger fragments, and at the last moment they fire all weapons at the Arquitens, tearing it in half and they soar out of the tunnel through the explosion, losing the gas pods but surviving intact.
The contact Bail Organa, and he says while without the pods the Senate will not act, the footage they have recorded will convince additional systems to join the Rebel Alliance. Commander Sato congratulates them, not only did they gain the information, they rescued Saw and gained a Defector core for chopper base.
Saw is not satisfied however, stating they still don't know what the Empire was building.

High Points : This is a good resolution to this two parter, there are no dangling threads apart from the ones being obviously set up with the non-extinction of the Geonosian race, and Saw Gerrera's investigation of what we know to be Project Stardust.

I was especially impressed with Saws attitude and his characterisation, and his behaviour is all too plausible, that any means necessary are required against the Empire. His attitude towards the Jedi is also well deserved, as he blames them for their defeat in the Clone Wars. But I must question this, the Jedi didn't lose the Clone Wars, they were fighting on the side of Republic, which won. Although they were declared to be criminals and were exterminated, they never lost the Clone Wars. I must also wonder what the story believed by Saw is, he obviously knew Ahsoka and Anakin and therefore didn't believe the official line that the Jedi were criminals working against the Republic, but how much of the truth does he really know to believe they were weak and lost the Clone Wars.

It was great seeing the Jetpack wearing Stormtroopers, they're a sensible addition as we saw Clone Troopers wearing Jetpacks, and it only makes sense that they would be replaced by Stormtroopers. We've seen them in games, but it was nice to see them returned to canon, and in a sensible tactic by sending them into the vertical air tunnel where the Empire couldn't deploy ships or walkers.

Low Points : The heart of the episode comes down to Saws plan to torture the Geonosian vs Ezra's plan to let him go free because he's the last of his species. A black and white problem which I find odd, since there are many shades of grey, and possibly ones which serve Klik Klak and the Queens egg he protects more. If they leave him, and his emerging species (I imagine that a Geonosian queen could repopulate pretty rapidly) set off the sensors the Empire has planted, and they release more of the gas, it could wipe them out. Torture is wrong, but interrogating him somewhere with a Protocol droid seems reasonable, and discovering if there is another safer world they could put them on, one without Imperial monitoring and Gas bombs?
While Rebels is a kids show, and they like putting everything in black and white shades of morality, they seemed to forget that usually not taking one of the extremes is the best decision for everyone.

I was also a little disappointed by the Rex vs Saw fight, as I felt Saw defeated Rex far too easily when he was restraining him. While Rex is out of shape and getting older, so is Saw, and Saw has injuries which have serious repercussions (artificial lungs etc), and it was disappointing to see Rex beaten so easily.

Finally I'd like to question the ease which the Ghost destroys the Arquitens Cruiser, just by flying at it and firing all weapons it totally destroys the must larger military vessel. There's no tricks involved, they don't smash it first with the gas bombs they are carrying, they don't damage it and escape by the skin of their teeth, they rip the capital vessel apart just using their normal weapons. If they can do that, then the danger whenever an Arquitens or similar vessel turns up is zero.

So what do you really think ? : A solid second half to this story, and provides a satisfying resolution to the story, with Saw heading off to further his investigation into the Death Star, eventually following the trail of Kyber Crystals to Jedha and his demise.
I'm a little disappointed by the writers taking the Geonosians to the edge of extinction but backing out at the last second by having this Queen egg which can save the entire species. This is the second species we've seen taken to the edge of extinction, and then reprieved, as this is exactly the same as what we were led to believe about the Lasat. I would have much preferred us to being left believing that the Geonosians were wiped out, and a later storyline could reveal this as their fate if required.

Final Words : A solid story, and this felt like the story was moving forwards. With many recent episodes I've felt impatient to see us move forwards with the main plot, but even though this story wasn't anything to do with the main plot, it felt important enough that I didn't feel that my time was being somehow wasted.