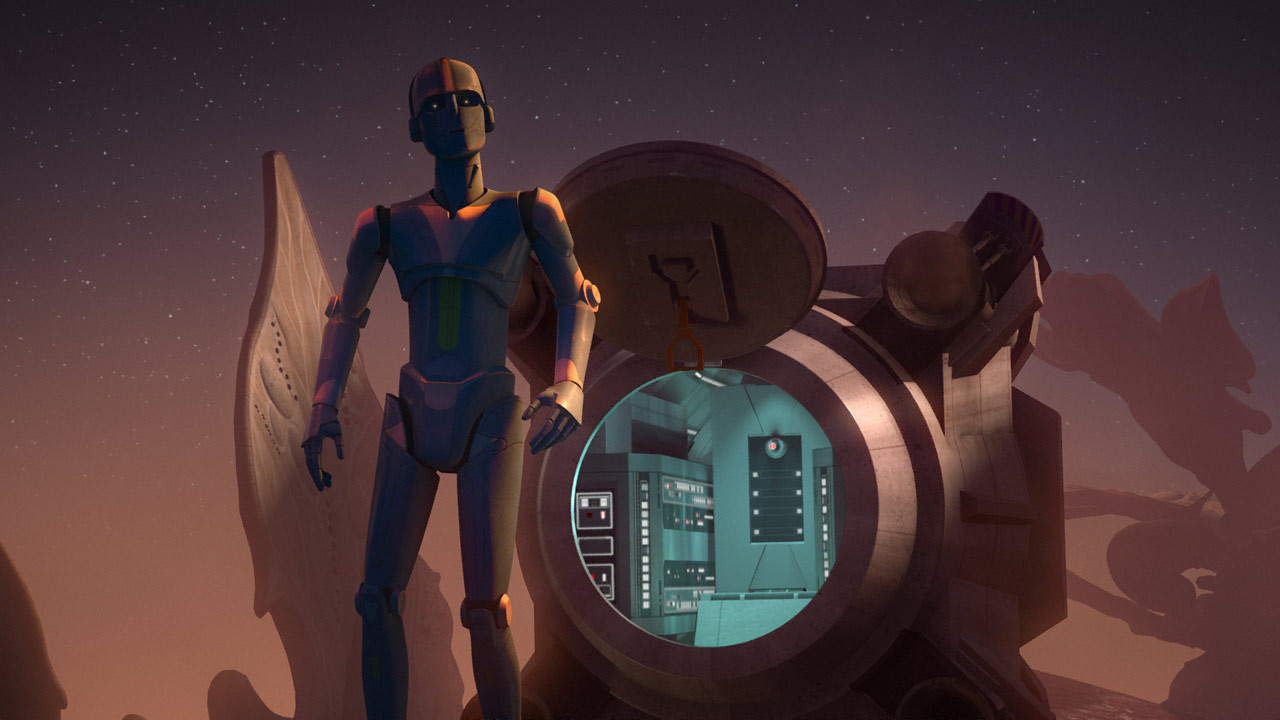 What is it ? : Deep in space a Star Destroyer deploys hyperspace pods, on of these travels to Attolon, landing near to Chopper base. A droid exits the pod, it resembles a Protocol Droid, and begins exploring.
Meanwhile the Spectres are leaving on a mission, but leave Zeb behind as he is security chief, remaining on the base with only Chopper and AP-5, the two droids mock him.
As the Ghost leaves, the droid searching Attolon spots it, and observes Chopper Base, but as it approaches it is attacked by two Krykna, the attack knocks out one of the sensors around Chopper base.
Ap-5 informs Zeb of the downed sensor, and he and Chopper leave the base to discover the cause and repair any damage. They find and repair the sensor, and find the droid which has received damage to its head, and take it back to the base.
Back at the base, AP-5 identifies the droid as some kind of Protocol droid, and they power it back up, but the damage to it's head has disabled it's memory. It quickly begins counting the stock of weapons on the base, which Zeb thinks may make it useful as does AP-5.
Zeb is called away by a message from Fulcrum, Fulcrum tells them the Empire has deployed Infiltrator Droids disguised as protocol droids, and they have lost contact with one, and if it doesn't return then it's loss will inform the Empire of their location. Zeb realises the droid they've found is the missing infiltrator.
AP-5 is giving instructions to the droid, and uses the phrase "Rebel Base", which reactivates the droids programming and it switches to its combat mode.
Zeb battles with the Infiltrator Droid, driving it away with his bo-rifle.
As they search for the droid they find a disassembled Astromech that the infiltrator has used for parts to repair itself, but eventually Zeb tracks it down and disables it.
The damaged droid begins a countdown which will destroy Chopper base, and although they cannot stop the countdown, they find a way of slowing it down. Zeb comes up with a plan, allowing the droid to return home before it detonates. Reactivating the droid but in passive mode, it returns to it's pod to communicate its location to the Empire, but Zeb blasts the pods communication dish, which forces the droid to pilot its way home.
The pod returns to the Star Destroyer, and it informs them that it has found the Rebel Base, but it detonates before they can find out where, the explosion takes out a number of the other returned droids.
Agent Kallus reports to Grand Admiral Thrawn, who asks what happened. He reports that 94 droids were destroyed, and notes that Thrawn doesn't seem unhappy with this. Thrawn tells him that before this, the Rebels could have been on thousands of planets, but now they know they're on one of those 94.

High Points : The episode provides some movement on the main plot, allowing the Empire to make some progress against the Rebels, while we've been moving forwards with the Rebel plans to attack Lothal. Now we've got the Empire getting closer to locating the Rebel base to stop that attack.
So while this episode at first appears to be a throw away distraction from the overall story arc of Rebels, it is in fact a key piece.

The combat against the Infiltrator droid is excellent, with it providing a mobile and dangerous target, and it scavenging other droids for parts gives it a vampiric feeling which just adds to the danger.

Low Points : Both Clone Wars and now Rebels have had infiltrator droids which are basically transformers, which don't feel very Star Warsy. I especially have problems how this droid which appears to be a protocol droid manages to unfold into a much more dangerous and larger droid. This would leave much of the droid empty, which surely doesn't make the droid any tougher, it just makes it bigger, like a threatened cat.

I am also somewhat annoyed at the amount of time spent in this episode with AP-5, Chopper and Zeb insulting each other. A little banter is okay, but by this stage the characters have saved each others lives so often there should be respect between them all. By this point Chopper is just being an asshole, and while it's supposed to be quirky and endearing to the kids, but to me it's just irritating.

So what do you really think ? : It's an enjoyable enough episode and I felt it's running time flew past, but it really doesn't feel to have much substance. There's nothing much wrong with the episode, but there's nothing much to the episode at all, they fight a droid, and that's pretty much it. The entire episode can by summed up in those four words.

Final Words : The next episodes move onto dealing with Mandalore, and while I remember liking the character development of Sabine, I've never really been a fan of the way that the Mandalorians are handled in Rebels. But we shall see if my opinion is changed on a rewatch.