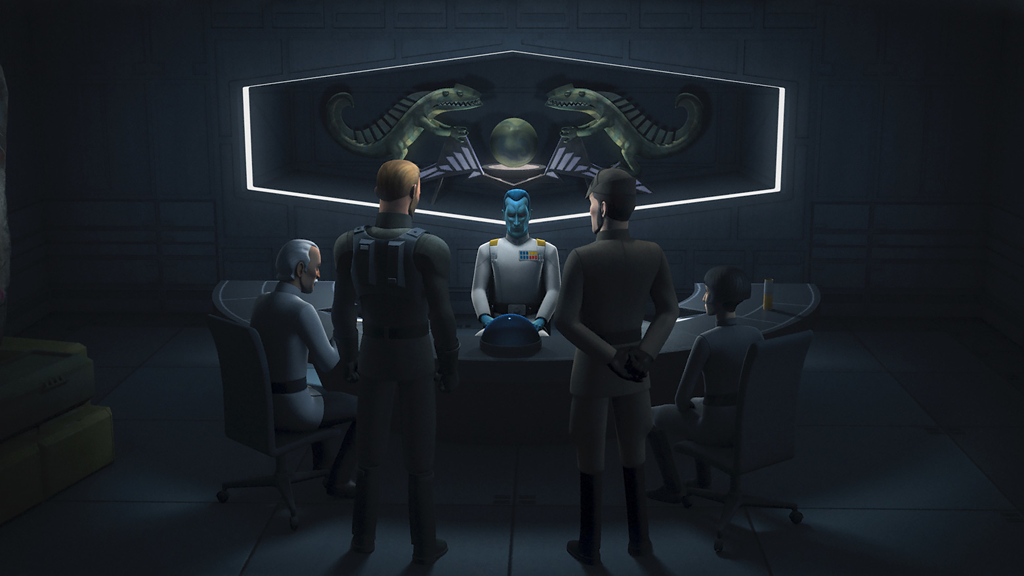 What is it ? : The episode starts literally through Imperial Eyes, as we see from Agent Kallus's perspective for a few moments as he awakes to blaring alarms, and finds the Arquitens Class Cruiser he is aboard has captured a stolen passenger transport.
The transport is docked using tractor beams, and the thief is brought aboard, revealing it to be Ezra Bridger disguised as a bounty hunter. Kallus takes him to the brig where they talk and Ezra reveals that they have received information that Kallus is about to be exposed and it's time for him to defect.
The situation is made more complex, when the Chimaera arrives and Kallus and Lieutenant Lyste who is commanding the ship are ordered to a meeting with Grand Admiral Thrawn and Lyste takes Ezra as evidence of his success against the Rebel threat even though they still believe that Ezra is still a Bounty Hunter and ship thief.
Aboard the Chimaera, they discover that security is at a high with their code cylinders being required for access to almost all locations. Ezra is transferred to the detention block, with Chopper and AP-5 slipping aboard as well. Kallus and Lyste go to attend the meeting with Thrawn, passing Brunson, Titus and Slavin, all Imperial command staff being escorted through the ship by Stormtroopers. At the meeting they witness Thrawn sparring with droids, and then deactivating them with the command code "Rukh", and Konstantine introduces them to Colonel Wullf Yularen.
Yularen compliments Kallus as one of his best students, and the meeting begins with Thrawn revealing he has narrowed down the location of the Rebel base even further, and that they have a spy in their midst called Fulcrum, and they are attempting to determine who it is. After the meeting, Kallus and Lyste spot Governor Pryce, and Kallus tells Lyste that since she didn't attend the meeting that she must be under suspicion, and tells Lyste to keep an eye on her, switching their code cylinders at the same time.
He goes to the detention block and frees Ezra, and AP-5 informs them that Kanan and Rex are coming to collect them, and have told him they'll need access codes as the ones they've got are only ones for the Arquitens cruiser which captured Ezra originally. Kallus also tells them that they'll need to destroy the information about the Rebel base from Thrawns records, and AP-5 tells them they can do both at the same time.
Colonel Yularen informs Thrawn that encoded signals have been broadcast from the detention block where a prisoner was take shortly before, and Thrawn decides to interrogate the prisoner himself, but by the time he gets there Ezra is gone, and he discovers that it was Lyste's command that was used to release him.
In Thrawn quarters, Chopper gets the codes and transmits them to Kanan and Rex, and replaces Atollon with another nearby system, but before they can leave Thrawn returns. Kallus ducks into Thrawns training room and reactivates the droids he was duelling with earlier, after replacing their command codes. While Thrawn is distracted by the droids, they slip out and head for the hangar bay to their rendezvous with Kanan and Rex, who have their own problems as Yularen has ordered Pryce to arrest the crew of their unexpected transport.
Pryce orders them to remove their helmets, and a skirmish breaks out as she brawls with the two men, knocking Kanan down and equalling Rex in hand to hand combat. However Lyste witnesses Pryce attacking two Stormtroopers and decides this is proof of her as a traitor, shooting and stunning her.
He is recognises Ezra boarding the shuttle but is grappled to the ground by Kallus who switches code cylinders back, and tells Ezra he won't be leaving now he has captured "Fulcrum", and Ezra realises that he intends to keep his cover by framing Lyste.
They launch from the Chimaera, and Kallus proceeds to frame Lyste, attending another meeting in Thrawns office where the evidence is assembled, that Lyste freed Ezra and entered Thrawns quarters, and then attacked Pryce as she tried to stop Kanan and Rex. Kallus apologises to Thrawn for not spotting Lyste earlier and allowing the reprogrammed droids to be used for an attempt on Thrawns life. Thrawn says no apology is required as the attempt failed and dismissed everyone present except Yularen.
Yularen remarks that things fell into place a little too perfectly for his liking, and that Lyste is too inexperienced to comfortably be Fulcrum, and Thrawn has the bounty hunter helmet left behind by Ezra brought to him. From the way it is painted he determines that it was done by Sabine Wren, and that therefore the bounty hunter was Ezra Bridger who Kallus should have identified. This means that Kallus is the Rebel agent, and Thrawn remarks that he will be of more use the the Empire than he ever was as Agent Kallus.

High Points : A solid story with both sides making moves against each other and acting intelligently, Thrawn especially is brilliant, they keep accurately showing his genius in guessing his opponents motives and moves, and the fact it comes down to art once again shows consistency with Thrawn's character since it was first introduced in the Thrawn trilogy back in the 90's.

To counter Thrawn's genius, we've got Agent Kallus creating a conspiracy to draw the Empires attention away, and doing amazingly, although it all turns out to be for nothing against Thrawn, I was extremely impressed with Kallus' plan and his forethought and preparation for that plan to come into being.
From memory, Kallus is never this brilliant again, but this episode makes him shine amongst the Rebels as a truly brilliant tactician.

I also really enjoyed the mistrust that Kallus was able to exploit among the Imperials, with them all fighting for position and rank, with only those who truly don't care (Kallus, Thrawn and Yularen) able to see the bigger picture and take control of the situation.

And finally, it was great to see Wullf Yularen in Rebels. This character who is unidentified during the meeting on the Death Star in A New Hope, served as a captain on a Venator Star Destroyer through much of The Clone Wars series, and it's great to see his transition into Imperial Intelligence, and portrayed as a smart and competent officer.

Low Points : The one aspect of the episode I found annoying was Ezra's continuing disbelief of Kallus, not trusting him even enough to reveal the location of the Rebel base. This really makes Ezra seem petty, especially out of character because it is usually Ezra which calls for his comrades to trust those they meet and trust their word (Maul and Hondo both have been trusted by Ezra even after he knew who they were and after multiple betrayals by Hondo).
Although Ezra and Kallus has had a few run ins and Ezra has reasons for mistrusting him, it just seems to be out of character and because Kallus has previously proven himself and saved Ezra in the past, it just makes him look petty and childish.

So what do you really think ? : And excellent episode, which seriously moves the main plot along, the Rebels manage to hide their base and keep Fulcrum in place for a little longer, but Thrawn has identified Fulcrum and plans to provide misinformation to the Rebels through him. Everything is definitely in motion as we move towards the end of the season, and we can feel the two sides are on a collision course and a climactic confrontation is due soon.

Final Words : An enjoyable episode, putting Kallus as the hero and at the centre of the story, which was a pleasant and entertaining switch. He was the antagonist for much of the first two seasons, and now seeing his growth and his joining the Rebellion is one of the better plotlines in Rebels, amongst so many.

And just as a final comment, I remember when originally watching this episode thinking that the Ysalamiri statues in Thrawns office were actually Noghri! In fact I thought they weren't statues at all, I thought they were Noghri death commandos using their natural camouflage abilities to appear to be statues, so when Kallus and Ezra entered Thrawns office during this episode, I thought they were going to get ambushed by Noghri.
Obviously that doesn't happen, but then again, Thrawn doesn't use Ysalamiri against the Jedi at any point in the series, so sometimes statues are just statues, and don't signify anything.