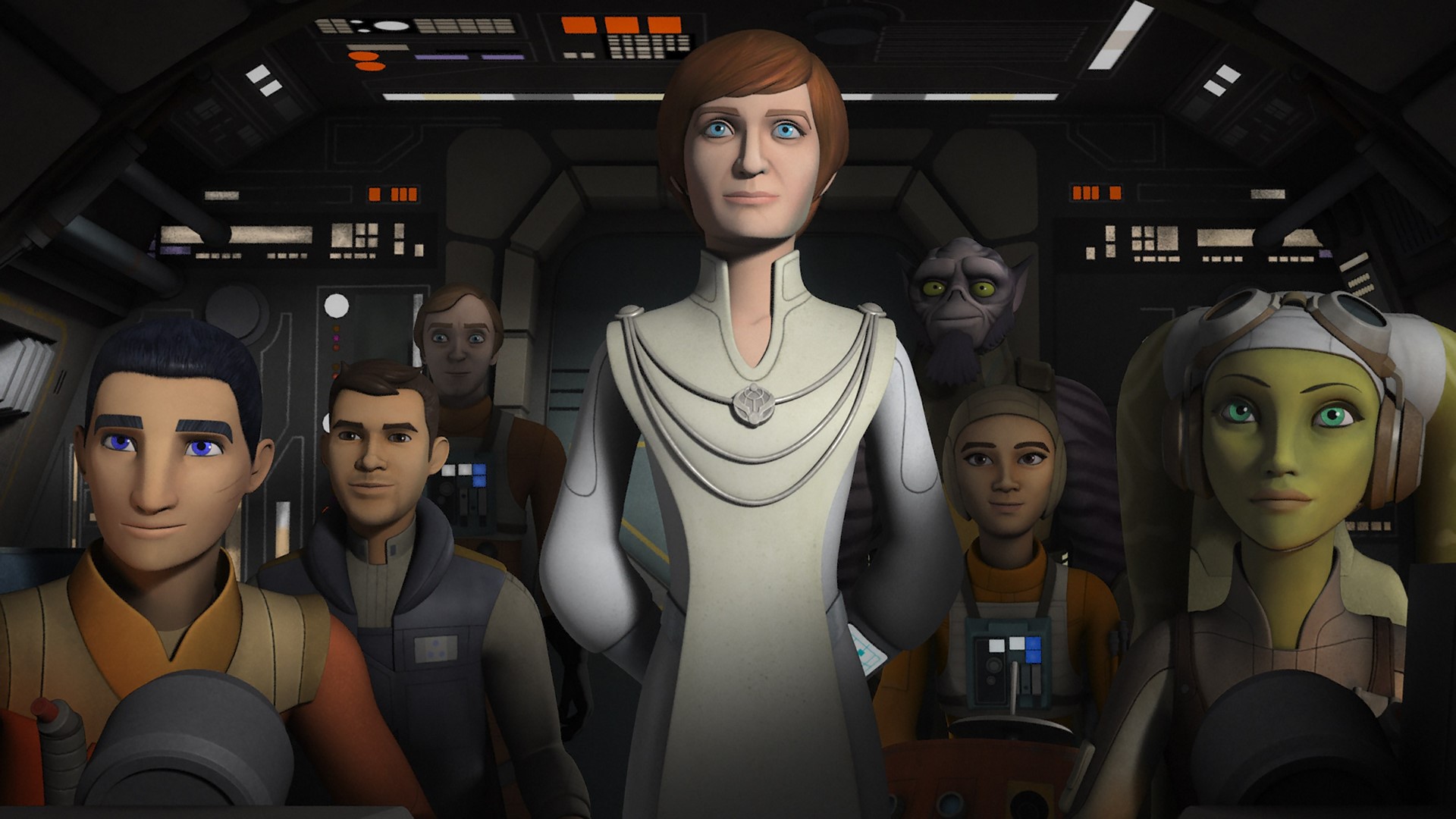 What is it ? : The Ghost, with Ezra, Hera, Zeb and Chopper aboard are waiting for a rendezvous in space hiding amongst the wreckage of a couple of old separatist ships. While they are waiting they watch Holonet propaganda, and the three comment on the news that Mon Mothma of Chandrila has been declared treasonous for making a speech against the Emperor where she called him an executioner for the brutal attacks on the people of Ghorman.
They then realise that the wreckage is being searched by an Imperial Probe, and as they engage and destroy it, their rendezvous arrives, a transport ship and it's Y-Wing escort. The Ghost refuels the ships from the bulky fuel pods it carries, and the Y-Wing pilots comment on the previous activities of the Spectres just attracting Imperial attention and making things harder across the outer rim.
The probe has transmitted their location, and an Imperial Cruiser and it's Tie Escort come out of Hyperspace and attack, the Y-Wing's move to defend, and as the pilot of the current one being refueled aboard the Ghost is injured in the attack, Ezra takes the controls of her Y-Wing and joins the squadron in their defence.
The transport is damaged, and the crew evacuate to the Ghost, revealing their passenger is Mon Mothma herself. The Y-Wing Ion cannon the cruiser, and then their torpedos rip into it, allowing the Ghost and the Y-Wings to jump to Hyperspace.
Knowing that the obvious routes out of the system will be blockaded, Hera takes them to an old smugglers route, the Archaeon Path, through an explosive nebula. But they discover that Thrawn has already thought of this option, and placed Tie Defenders here waiting for them.
The Y-Wing escort engage the Defenders, but they are severely outmatched, and they have to avoid using their torpedoes or it will ignite the nebula. Hera takes the Ghost close to one of the forming stars, relying on the hull of the Ghost to be tougher than that of the Tie Defender, which it is, and the Tie Defender has to abort it's attack, allowing the Ghost to escape out of the Nebula, but it is heavily damaged.
As they emerge from the Nebula they find two Star Destroyers awaiting them, and they can only limp away as they attempt to repair and get full power restored. But the Star Destroyer locks tractor beams on them, and they have to shut down engines as they are drawn in.
Inside the Nebula, Ezra attracts the attention of the Tie Defender, and flies through the sights of the remaining Y-Wing, allowing them to disable the Defender as it follows.
And they emerge from the Nebula to witness the Ghost being captured, Hera orders them to fire their torpedos at the Nebula, causing it to ignite in explosions which devastate the Star Destroyers and allow them to escape.
Arriving at their destination, Mon Mothma transmits the following message.


"This is Senator Mon Mothma. I have been called a traitor for speaking out against a corrupt Galactic Senate. A Senate manipulated by the sinister tactics of the Emperor. For too long I have watched the heavy hand of the Empire strangle our liberties, stifling our freedoms in the name of ensuring our safety. No longer! Despite Imperial threats, despite the Emperor himself, I have no fear as I take new action. For I am not alone. Beginning today we stand together as allies. I hereby resign from the Senate to fight for you, not from the distant hall of politics but from the front lines. We will not rest until we bring an end to the Empire, until we restore our Republic! Are you with me?"

And as she speaks we see people across the galaxy hearing her message, Senator Organa, Jan Dodonna, Rex, Commander Sato, Ryder Azadi, and others all listen, and ships begin jumping into the system, building the fleet of the Rebela Alliance. Mon Calamari Cruisers, Nebulon B frigates, Corellian Corvettes, and many others arrive as Mon Mothma announces that this is their Rebellion.

High Points : The main element of this episode is the battle in the Nebula, and the tactics used by the Rebels are interesting and entertaining, with them using heat of tthe forming stars against the pursuing Ties, and Ezra putting himself in danger to lure the Defender into the sights of his allies, before finally using the explosive nature of the nebula against the Star Destroyers. Although this final use is a little signposted and therefore the obvious solution, but it is so well realised with the flames burning the hull armour on the Star Destroyers away, so they burn without being destroyed, that I still count it as a big plus in the episode.

It's also great to see one of the key moments in the formation of the Rebel Alliance, although we've always been led to believe that the larger rebellion existed, with Hera talking about other Rebel cells, we now see the coming together of the Rebel fleet for the first time.

There are also a couple of great moments between Hera and Mon Mothma, where each inspires the other, Mon Mothma wishing she could be of more practical use against the Empire, and Hera acknowledging the importance of the message that Mon Mothma is communicating to the galaxy to build a Rebel Alliance.

Low Points : I'm a little bothered with the use of Ion weapons during this episode, early on during the battle, the Y-Wings score hits with their laser cannons on the Tie Defender which just shrugs them off without taking any damage. Then at the climax of the episode, Ezra lures the Defender into the ion fire of the Y-Wing and it is disabled. Why do they need the special maneuvers, if they'd just fired Ion cannons at the start, they could have avoided much of this episode. Also given they disable a Cruiser with Ion cannons early in the episode, why are they bothering with their laser cannons at all, since the Ion Cannons are obviously far more powerful.

So what do you really think ? : An excellent episode with brilliant use of Mon Mothma, nice action within the Nebula and against the Star Destroyers, although possibly a little light on villains as Thrawn barely features, and the Tie Defender pilot even though he's a returning opponents for the team, is so minor as to be irrelevant.

Final Words : With the intertwining of the Rebels and Rogue One storylines this season, it's excellent to see the building of the Rebel fleet that will prove so important in that movie, it would have been nice to have seen the Profundity as part of the forming fleet, but we still see many recognisable vessels, and the number of ships is impressive.