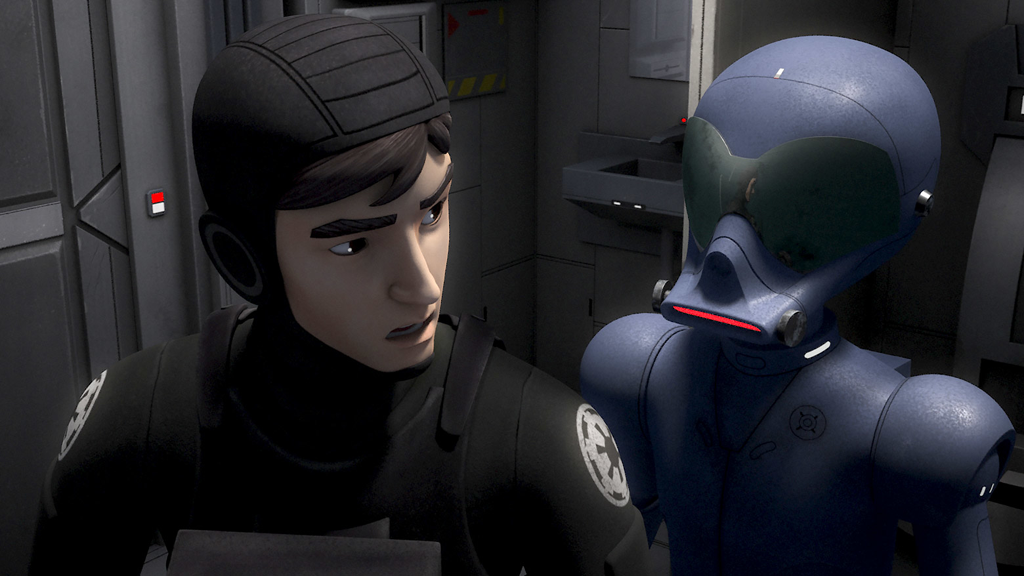 What is it ? : The episode begins with Wedge about to depart on a mission with Chopper and AP-5, Zeb mocks him because the two droids are insufferable, but they depart aboard an Imperial Sentinel Class Shuttle. The two droids bicker throughout the journey, with AP-5 pushing his superiority because Hera has put him in charge for this mission.
Landing at Killun 71, Wedge delivers the two droids as if they are replacements, and they head into the Imperial base to retrieve codes, and while Chopper attempts to gain access from an access point in the outer area of the base, AP-5 mocks him because the codes will not be accessible from anywhere but the control room, and heads there alone, easily getting the codes after pretending to be the replacement for the inventory droid which already worked in that area.
Meanwhile, Choppers access to the system has been monitored by an Imperial spy ship deep in space. The vessel is manned by cyborgs working for Imperial Intelligence, who perform a reverse hack on Chopper shutting down his brain and remotely controlling him. When they recognise who Chopper is, and that he has been reportedly working with the Spectres, however they discover that he doesn't contain the coordinates of the rebel base.
When AP-5 returns with the codes, he finds Chopper mainly unresponsive, which he takes to be Chopper sulking because AP-5 has managed to complete the mission alone. As they head back to the ship, AP-5 notices that Chopper is using an Imperial Code, which the controlled Chopper claims is because AP-5 sometimes uses it, which AP-5 takes to be Chopper questioning his loyalty.
Returning to the shuttle, Wedge finds the quieter Chopper to be far more agreeable, and when AP-5 starts warning him that he believes there's something wrong with Chopper, he takes it to be more of their rivalry and infighting.
Returning to the Ghost, AP-5 continues to warn that something is wrong with Chopper, but isn't believed as everyone takes it to be AP-5's normal complaining about Chopper, but Hera notices that Chopper has gone straight to the cockpit.
She follows to find him plugged into the Navicomputer, claiming that he is updating his records, after reminding him that she herself wipes his memory after every mission, she returns to the group telling them that she is suspicious of Choppers behaviour. Chopper uses the intercom to tell her that he has found something in engineering, however he waits for them to pass through the cargo hold, and locks the crew in, then opens the airlock to space after spiking the navicomputer to download it's records to the Imperial Spy Ship.
Hera over-rides the airlock doors, but they send AP-5 outside of the ship to unlock the hold from an external control point, but as he finishes this Chopper attacks him with blasters, knocking him off the ship into space.
The crew ambush Chopper as he returns to the cockpit, and use feedback through the control link to overload the systems of the spy ship, causing it to explode, and Choppers brain to reboot, restoring him to normality.
They return to get AP-5 where he is floating in space, only to disturb his tranquility where he is surrounded by baby Neebray enjoying the peace and quiet of space.

High Points : The idea of the reverse hack is a solid one, and the crew of the Imperial spy ship are menacing and efficient, the fact that Chopper becomes agreeable for the first time while under Imperial control, so AP-5 appears to be the problem droid, also works well, until of course everyone realises how out of character for Chopper this is.

I must return to mentioning the crew of the Imperial Spy Ship again, these characters, augmented by cybernetic brain enhancements are coldly logical, softly spoken and extremely good at their job. This makes them a real menacing presence in the episode, they don't shout and threaten, they're not heavily armed, they just quietly and efficiently do their jobs, hacking Chopper and attempting to gain the coordinates of the Rebel base, without ever actually coming into sight of the Rebels themselves. It's a great concept, well done except in their defeat.

Finally, I did enjoy the fact that Chopper and AP-5's squabbling finally came back to haunt them, as AP-5's constant moaning about Chopper leads to no-one believing him when he has legitimate problems with him, very much a case of the droid who cried wolf. The episode then turns this into an advantage for the heroes, as they recognise the more helpful Imperial controlled Chopper is acting completely out of character, finally recognising that something is wrong.

Also, finally the Empire has caught onto the fact that the Rebels keep sending droids on missions, relying on most people just ignoring them, this trick has been used too often, and it was great to see the Empire catch on, and turn this trick back upon the Rebellion.

Low Points : My major problem with this episode, is the way that the Spy Ship is beaten. Hera accesses the hacked Chopper, and sends a powerful signal through him which burns out the sensitive systems on the Spy Ship, causing it to explode. It causes a large vessel, some 70 meters in length to explode across several light years, but doesn't damage Chopper himself. I found this is to be an unsatisfying resolution to the episode, I would have much preferred them to use the link to hack the hackers, wiping their computers, maybe even hacking their enhanced brains to some degree, but the signal causes their ship to explode.

So what do you really think ? : Although Chopper and AP-5 usually annoy me with their unprofessional and annoying squabbling, I thought this episode explored this fractious relationship well, and turned it into an advantage. The opponents in this episode I found to be interesting, although I was definitely disappointed at how easily they were defeated and completely destroyed. Especially as their leader was the first Star Wars character I can think of who wears glasses.

Final Words : Well, only 3 episodes to go this season, and the next episode is the final resolution of the entire Maul story arc, so I'm keenly awaiting that.