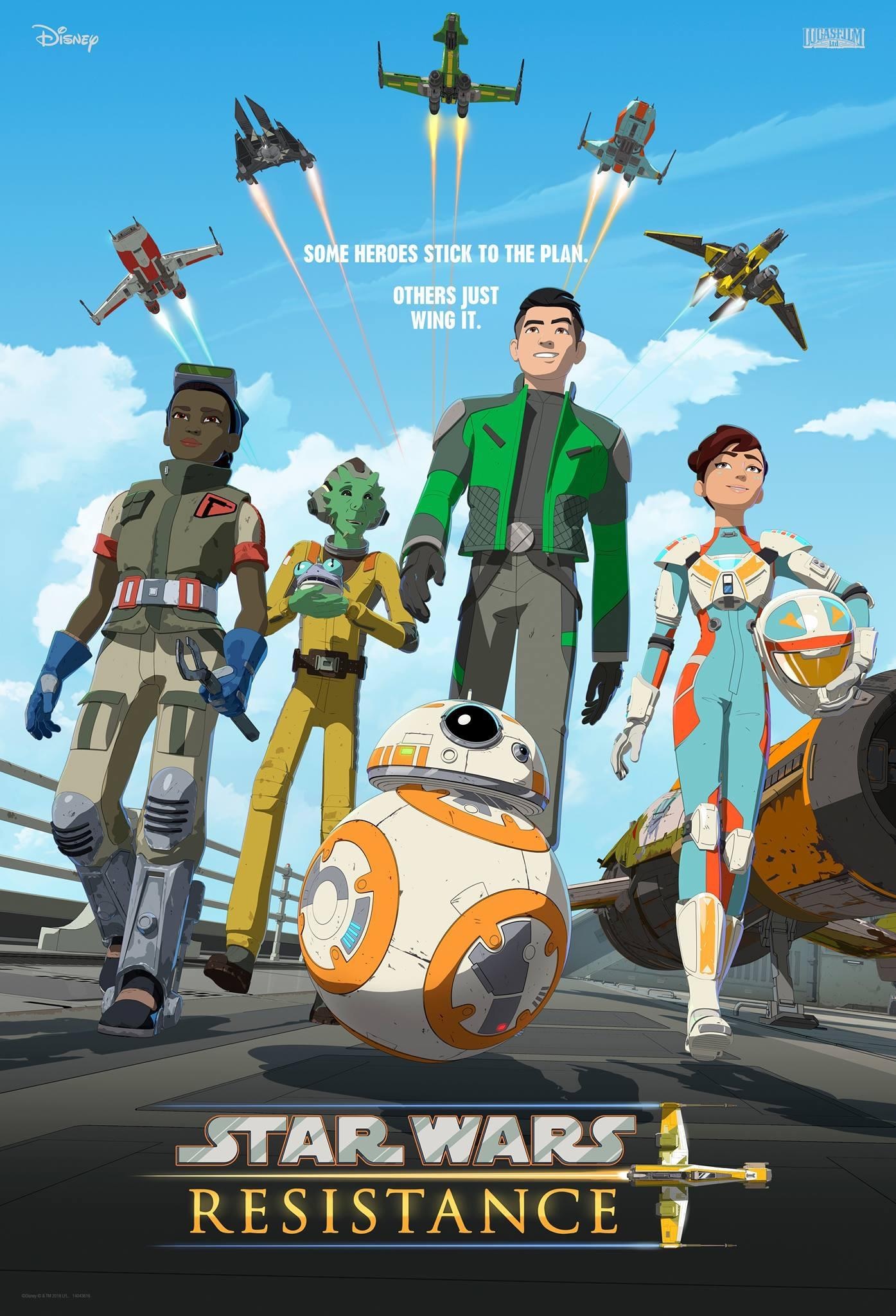 What is it ? : Three New Republic X-Wings are waiting to rendezvous with Poe Dameron of the Resistance, they have been ordered to provide him with some information, but they come under attack from an Ace Red First Order Tie Interceptor.
The pilot of the Interceptor is far better than them, so Kazuda Xiono orders two of them to make the jump to Hyperspace, while he delays the Interceptor and overconfidently thinks he will be able to beat him single handedly, and complete their mission. But his X-Wing is hit and loses power, but just before the Tie Interceptor can target and destroy them, Poe Dameron arrives in the nick of time and draws the Tie Interceptor away.
As they skirmish, Kazuda Xiono directs his astromech to ignore restoring power to the engines, but instead power the weapons, and he directs Poe to lure the Tie Interceptor into his field of fire, hitting and ionising the vessel, causing the pilot to escape into Hyperspace.
A Corellian corvette arrives, and once aboard Kazuda begins geeking out about being about such a historical vessel. Poe takes the information and leaves to communicate it onwards to Leia, with Kazuda asking him to pass on gushing praise for her. He then decides to try to listen into the message, but stumbles into the communications room, much to his embarrassment.
Poe and Kazuda speak, and Poe asks Kazuda to join the Resistance, something that Kazuda has long considered, but his father is a Senator in the New Republic, and he is worried about causing his family embarrassment. He arranges a scrambled communication home, where his father complains about how Kazuda always needs bailed out of trouble, how he got him his position in the Academy, and his position in the New Republic. Kazuda makes his decision to be his own man, and tells Poe he is going to join the Resistance, and Poe briefs him on his mission.
He is to go undercover on Castilon, in a massive fuel station in the middle of that planets oceans. The resistance has heard that there is a First Order agent working within the racing teams that operate out of the station, and Kazuda is to find out who it is.
Arriving at the Colossus, the fuel station, he finds it to be so massive that a city has sprung up within it, and Poe introduces him to Jarek Yeager, negotiating with him to give Kazuda somewhere to stay. Meanwhile Kazuda introduces himself to Neeku Vozo as the best pilot in the galaxy, a Nikto who takes everything literally, and begins telling everyone that Kazuda is the best pilot in the galaxy, to much ridicule among the inhabitants of Colossus. Kazuda plays darts against on of the denizens of the bar they're in, to distract from Neeku's stories, and ends up getting into a bar-room brawl. Much to Jarek's chagrin, who Poe has told that Kazuda will keep a low profile and cause no trouble.
After giving Kazuda some final pieces of advice, Poe departs, but leaves BB-8 behind to help Kazuda out.
Neeku arranges for Kazuda to take part in the races the next day to prove himself the best pilot, and when offered who he is to race, he selects the youngest pilot, a female human, Torra Doza, the daughter of the man who operates the station.
Jarek tells Kazuda that he can use the Fireballs to compete in the race, that by becoming a racer and having such a high profile he might avoid suspicion that he is a Resistance agent. Kazuda is introduced to Jarek's team, and shown the Fireball, a racer which lives up to it's name by exploding in every race it has taken part in. It is a wreck, and Kazuda and Neeku are sent to get parts, but don't have any money for them. Neeku relies on his friendship with the traders, and they agree to provide second hand and old parts, in exchange for lunch.
Neeku and Kazuda head to the market to get lunch, only to find out the vendor is one of those that he was fighting with in the bar. But comes to an agreements, he will provide free advertising on his racer in exchange for the lunch, which the vendor agrees to.
The get the parts, and fix up the Fireball in time for the race the next day, but as the race begins, the Fireballs engines fail and it plummets towards the surface of the ocean before they kick in and Kazuda can join the race,
Torra proves herself to be an excellent pilot, but Kazuda is slightly better, but hampered by the Fireballs, which threatens to overload if he keeps pushing it to the edge. Seeing an opportunity to win, Kazuda pushes the Fireball too hard, and it's engines overload and burst into flames as he heads for the finishing line, and he blacks out as he plummets once again towards the ocean.
Awakening, he finds out he lost, but survived, and having made a good show if it in the Fireball, has gained some status on the Colossus, which will allow him to remain and begin his mission.
Meanwhile the Tie Interceptor pilot from the beginning returns to Starkiller base, and sends a message for Captain Phasma.

High Points : It's the pilot episode, so it's got a lot of work to do, introducing the setting and characters, but still manages to be a fast paced, action packed story.
The setting itself, the Colossus is an impressive one, and full of character with the races set around it and the massive ocean it is built in the middle of. And the characters themselves seem an interesting and varied bunch, from Jarek, an ex-Rebel pilot who is sick of war and wants no more to do with it, to Neeku the Nikto who seems impossibly naive, to Kazudo himself, and idealistic and overconfident young pilot.

Low Points : Now, I'm going to gripe about a few things here, but bear in mind, this is the first episode, so the show still has to find it's feet and find out exactly what it is. But anyway.

The start of this episode proves once again that the New Republic was deserving of extermination by the First Order. Here are a flight of three X-Wings under attack from the First Order, and when Kazudo tells his father afterwards, it's the Resistance which are extremists, and the First Orders attack goes un-commented on. If they're ignoring direct attacks on their ships in such an effort to avoid another Galactic Civil war, they're ripe for a good exterminating.

What's with the Corellian Corvette that Poe and Kazudo board? From the dialogue, it's introduced as some historical relic treated with reverence, even though the Star Wars universe has vessels much older. Is it supposed to be the Tantive IV, but we're never told. Also, why is it completely empty. When Poe and Kazudo are aboard, no other people are seen at all, no crew wandering the corridors, no-one manning controls, just Poe, Kazudo and their two droids.

And let's get to it straight from the start, Resistance is for the kids, more so than either Rebels or Clone Wars, and with my 13 year old son it went down great, but I seriously found it childish. Hopefully it'll mature a bit as it goes on (like Ahsoka did in Clone Wars).

The races see a little video gamey, with them racing through floating hoops over the ocean surface, and around the Colossus platform, that said, it looks great.

The new graphical style they've chosen for the series is going to take some getting used to, although I must say I don't hate it. But until I do get used to it, it seems a little bright and oversaturated with colours (although that could be unique to Castilon), and the solid bar of white that everyone has instead of teeth slightly freaks me out.

Finally, I found that BB-8's presence is crowbarred in, there are other Astromechs in the series, and he doesn't serve any purpose in the plot at all so far. So it just felt a little like, here's that popular thing you all like, so like this thing that it's in. His presence isn't needed by the plot, and feels pointless.

So what do you really think ? : While I've moaned a fair bunch above, I have to say this isn't a terrible start to the series, the X-Wing vs Tie Interceptor battle at the very beginning was excellent, and for me it's a far better start than the Clone Wars had, and I grew to enjoy many episodes of that series.
So while it's definitely not as good as Rebels in my book, I'm going to give Resistance a chance, and will definitely be watching it hoping that it grows and improves.

Final Words : There's a lot of world building occurring in this episode, and some characters who I've seen advertised as being part of the main cast, have only been featured on screens without any speaking parts yet, so we've got a lot to go yet.

Kazudo's mission is to discover the First Order spy, so I'm going to play along in my reviews and say who I think it is.
So we briefly glimpse one of the Racers who pilots a vessel made from the remains of a Tie Fighter, and his background is that of being in the Empire. But I think he's too obvious and therefore a red herring. My choice at this particular time is Neeku, he seems too naive to have survived, and the fact he attaches himself to Kazudo as soon as he arrives with Poe Dameron, makes me suspicious. And although he helps them get the parts for the Fireball, this could be because he sees it as a potential death sentence for the young pilot.
I doubt I'm right at this early stage, but we'll see where my suspicions lie as we go forwards.