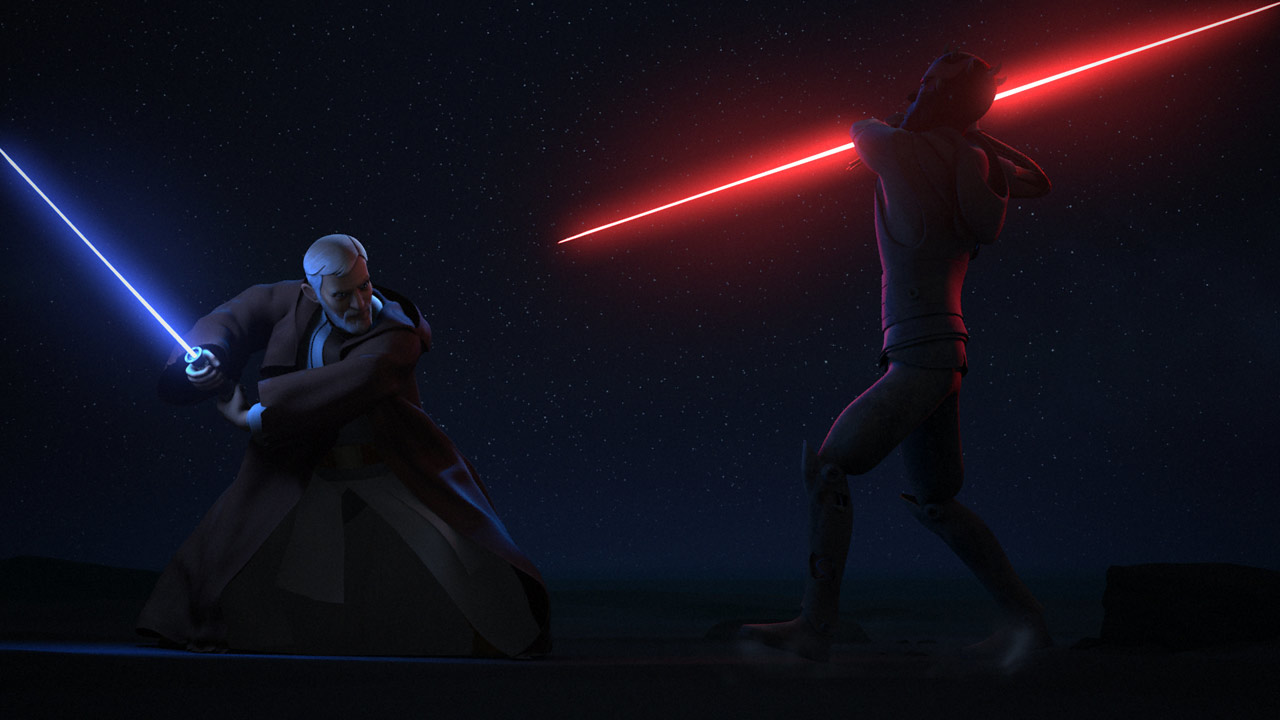 What is it ? : The episode begins with Maul lost in the wastes of Tatooine, searching for Obi-Wan but unable to locate him, he manically decides to draw Obi-Wan out of hiding, so he pulls out a shard of the shattered Sith Holocron and reaches out through the force.
Meanwhile Ezra is sleeping aboard the Ghost, in his shared quarters with a snoring Zeb when is woken by a voice. Leaving his quarters, he follows the voice to Kanan's quarters to find a Holocron repeating Obi-Wan's warning on the fall of the Jedi Order and the Republic, along with pieces of the Sith Holocron glowing brightly. He turns to find Kanan has entered behind him.
At a meeting later, Ezra tells the group that Maul is going for Obi-Wan, and that they should warn him. He also points out that locating Obi-Wan could be a major boost for the Rebel Alliance, and Rex tells him that of all of them, he wishes Obi-Wan was still alive, and Kanan tells him that Holocrons have minds of their own, and that it may just be a glitch. Hera tells Ezra that he is needed for the liberation of Lothal, so he should put this out of his mind.
Later he is delivering supplies to the A-Wing squadron and enquires if any are ready for flight, then take advantage of a momentary distraction to steal the A-Wing trainer, only to discover afterwards that Chopper is along for the ride.
He arrives at Tatooine, and calls on the shards of Holocron to lead him to Obi-Wan, and the glow and lead him to the surface, but when he investigates he discovers another piece of Holocron and is ambushed by Tusken Raiders and his starfighter is destroyed.
He sets off on foot, but when he reaches the wastes he decides not to cross them, however a vision of Maul lures him out into the wastes where he keeps travelling all night, and sometime the next day Chopper runs out of power and Ezra collapses exhausted next to the droid.
He awakens beside a campfire the next evening, Chopper is charging from a Power Lamp, and a cloaked figure is sitting across the fire from him. Ezra quickly identifies the figure as Obi-Wan Kenobi, who is fully aware that Maul is searching for him. Ezra suggests they fight Maul together, and Obi-Wan reveals that he has no wish to fight Maul, but that seems unavoidable now. He explains that Maul has manipulated Ezras hopes and fears through the Holocron, leading him to see what he wanted to see, and leading him to a place he should not be.
Their talk is interrupted by Maul, and Obi-Wan directs Ezra to take the dewback and head north where he will find his way home.
Ezra and Chopper leave, as Maul says he will see his apprentice soon, and then insults Obi-Wan as a rat in the desert, saying that it would perhaps be greater punishment to leave Obi-Wan to rot here.
Maul concludes that Obi-Wan wouldn't just hide here, that he must be here for a reason, and that reason is he is protecting something, someone, and at that Obi-Wan ignites his lightsaber, taking up his classic stance before switching it to one used by Qui-Gon Jinn in his battle with Maul.
Maul slashes at the camp fire, extinguishing it, and attacks, his strike easily parried by Obi-Wan who strikes at the centre of Mauls double bladed lightsaber, striking a fatal blow to Maul.
As Maul dies, Obi-Wan cradles his head, answering his questions about the Chosen One, and saying that he will avenge them, and closes Mauls eyes under the moons of Tatooine.
Ezra returns to Atollon in Maul's ship The Nightbrother, and apologises for leaving, saying this is where he is supposed to be, that the group is his family and they should go home.
Back on Tatooine, Obi-Wan rides his dewback to the Lars farm, and watches as Beru Lars calls Luke Skywalker home as the force theme plays the show out.

High Points : Wow, this episode feels absolutely epic, it ties everything into the original trilogy in an amazing fashion. Showing why Obi-Wan can't help the fledgling Rebel Alliance (he's got something more important to do), Mauls final fate, and the sequel to the Obi-Wan / Maul fight in The Phantom Menace.

And that fight is amazing, when I first saw it, I was a little disappointed at how short it is. But that makes it all the more epic, it shows Obi-Wan's growth compared to Maul, it shows that Obi-Wan has prepared for this fight and uses his study of his enemy against him. And it shows the escalating scale of Jedi powers, where Ezra and Kanan have always been far better than ordinary people, and at the beginning the Inquisitors were better than them. But Ahsoka was far better than the Inquisitors, and Maul was better than her. Finally we've got a fully fledged Jedi Master, older but still at the peak of his power, who beats Maul in two strikes. It makes complete sense that Obi-Wan, a Jedi Master and veteran of the Clone Wars, should be one of the most expert duelists in the galaxy, matched only by Anakin/Vader, who has similar experience.

But apart from the duel, we have a wonderful scene between Ezra and Obi-Wan, as h explains Mauls plan, and Ezra's place in the galaxy, this episode shows the growth of Obi-Wan since we last saw him in the Clone Wars series, and when we next see him in A New Hope. He's far more mature and worthy of the title Master, he has wisdom and imparts it clearly and patiently, he's not eager for battle or glory, and has even forgiven Maul for his past actions, but finally must kill Maul to protect Luke and the future of the Jedi. Obi-Wan has grown so much, he even comforts his defeated foe in his last moments, revealing that the prophecy is true about the chosen one (although I remain unclear if they're talking about Anakin or Luke?), this man who murdered the woman he loved, and killed his master, he still spends his final moments answering his questions and providing him some comfort.

Low Points : The briefness of the scenes with Obi-Wan makes me want to see more, but to it's credit does mean that he doesn't overstay his welcome, and there's not a whole lot apart from those scenes in the episode. Ezra steals a ship, gets lost in the desert and that's about it.

So what do you really think ? : As should be clear, I love this episode, even though that love is down to a 5 minute or less segment of the episode. I feel that it really ties everything together, showing us that although everything that Ezra, Kanan and the crew are doing is important in their story, that Obi-Wan, Yoda and Luke have their own separate story, and while they both exist in the same time period and galaxy, the two are not parts of the same story. That Ahsoka couldn't turn up and train Luke, that Ezra couldn't aid in the attack of the Death Star, both stories are equally important to those within them, but must remain apart.
I'm really not sure I'm explaining this properly, but this episode settled for me the arguments about why Yoda's not training Ezra, and why Wedge doesn't question Luke being last of the Jedi after hanging around with Kanan and Ezra for a season or two, that the heroes don't have time to cross over, because they have their own tales to be part of which are more important to them.

Final Words : While watching this episode, especially so soon after watching Solo: A Star Wars Story, I've come up with a bit of a theory.
The facts that I'm working from to come up with this theory.

My theory is, that the Boba Fett movie would probably be set before Solo, and show how Maul gets broken out of his imprisonment by Fett. Probably coming as a surprise towards the end of the story, we'd see Boba Fett working for a criminal syndicate, and performing a breakout, which would turn out to be Maul.
The Obi-Wan movie would be Obi-Wan, still fairly fresh into his exile on Tatooine, hears about Maul being in charge of this criminal syndicate, and comes out of hiding to defeat the man who killed his love.
This would help fill in the gaps in Mauls storyline, and explain why Maul hates Obi-Wan so much again, and Obi-Wan has managed to let go of his loss and anger so well.

It's only a theory, and after the underperformance of Solo, and the seeming cancellation of the Boba Fett and Obi-Wan movies, I think we'll never really know unless Dave Filoni tells us. But it seems to make a whole load of sense to me.