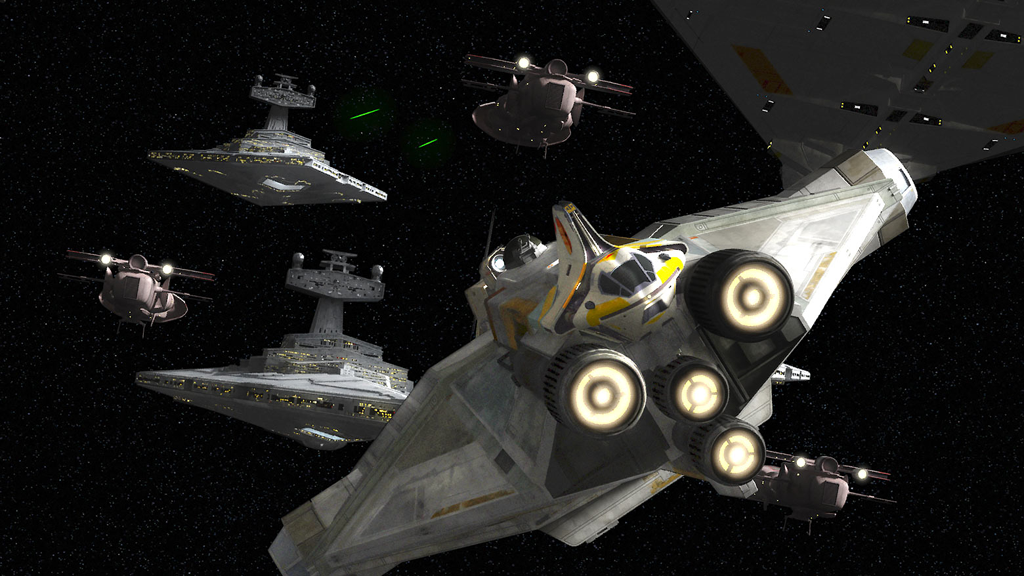 What is it ? : Thrawn arrives at the Imperial Headquarters on Lothal, meeting with Governor Pryce and Admiral Konstantine, escorted by Death Troopers, and under observation by Agent Kallus. They meet in an office, and activate various privacy systems, but are still observed by a reprogrammed Mouse Droid working for Kallus.
They contact Tarkin, and discuss the upcoming Rebel attack, which Thrawn thinks will be on the Tie Defender construction facility on Lothal, but that he still hasn't located the Rebel base, but he soon will.
Agent Kallus goes to the Ezra's broadcast tower just outside the city begins broadcasting a message as Fulcrum when he notices the signal is blocked, as he tries to circumvent the jamming, Thrawn enters the room with a jammer, revealing he knows that Kallus is Fulcrum. They fight, and Kallus destroys the Jammer, letting his partial warning go out, but is captured by Thrawn and the Death Troopers.
Meanwhile on Atollon, Ezra is being impressed at the amount of Rebel forces coming together for the attack on Lothal, and in orbit a fleet headed by General Dodonna is welcomed by Commander Sato as the rebel fleet masses.
Thrawn interrogates Kallus, gaining no information, but takes intelligence know of the course of Dodonnas fleet, and the direction of Kallus' signal, to determine a position in space. Kallus points out there is no planet there according to Imperial records, but Thrawn points out the art in this sector does show that something is there, and gives the orbiting Imperial fleet the coordinates.
On Atollon, the Rebels have received a fragment of Kallus' message, telling them that Thrawn know's. They try to determine what it is that Thrawn know's, and Ryder tells them the Imperial fleet just jumped out of orbit of Lothal, Hera realises that it's Atollon's location that Thrawn knows, and she triggers an alert.
The Imperial fleet jumps in, and Ryders hologram fades out as long range communications are jammed. and Hera orders the evacuation of Chopper base.
In Orbit, Commander Sato tries to provide cover so General Dodonna's Massasi fleet can escape into Hyperspace, but the first vessel to try to jump out is interdicted, and then destroyed by the Imperials.
Thrawn arrives and through hologram, tells Sato, Dodonna and Hera that there will be no surrenders here, that the Rebellion ends here today.
Hera determines the only way to get the fleet out is to arrange allies to strike at the rear of Thrawns fleet, and they need to get one ship to slip out and contact their allies. She orders Kanan and Ezra to do this, but Kanan says he has potential allies on the planet, and heads of to speak to Bendu.
Bendu is angry that Kanan has brought war to his planet, and says he won't take sides, that he is the one in the middle. Kanan angers him by calling him a coward.
The Rebel and Imperial fleets clash, and the Rebels are badly outnumbered and outgunned, but Commander Sato provides the gap in interdiction, by getting him crew to abandon ship, and using the Quasar Fire Carrier as bait to pull the glory hungry Admiral Konstantine out of position to attack it. His plan works, and as the interdictor moves closer, the carrier changes direction and rams it, destroying both vessels, which provides the opportunity for Ezra to hyperspace jump out of the battle aboard Mauls Mandalorian starfighter.
With many vessels destroyed, Hera orders the Rebel fleet to return to Atollon, under the protection of the bases shields.
Travelling through Hyperspace, Ezra contacts Mon Mothma, who refuses help for the Rebels, as it would lure the rest of the Rebel fleet into conflict with Thrawn and to destruction. So Ezra considers alternative allies, and decides to contact Sabine.

High Points : Another fantastic episode of Rebels, not only do we get a massive fight between the Rebel fleet and Thrawn's, but we get a showdown between Kanan and Bendu, the capture of Agent Kallus, and the sacrifice of Commander Sato who has been part of the series for the past 2 seasons.
Not only is the dialogue spark, the action stunning, but we also get a twist, the episode begins with the Rebel fleet coming together and the Rebel attack on Lothal looking hopeful. We get Kallus spying and passing on information to the Rebels, but that gets turned on it's head, Kallus' messages are used to track the Rebel base, and the fleet smashed. The story which looked so hopeful at the start, now looks as if defeat is near, shocking and riveting to watch.

Low Points : My criticisms of the episode are minor, for example how does Thrawn know the course of the Dodonna's rebel fleet, they travelled from Yavin IV, which is presumably still secret, to Atollon, which at the time was secret, so how does Thrawn know the course they took?
And I'm still not happy with Bendu as a character. He claims to be in the middle, but has helped train them, and now becomes angry at them bringing the war to his world, instead of angry at those attacking? His idea of balance is seriously strange, surely he should never have trained them, and just deemed the war to be nothing to do with him instead of raging at the one being attacked.

So what do you really think ? : With the resolution of this episode still to come, it's somewhat difficult to judge this episode, but so far it has been amazing. I just hope that the second half matches up to the standard set here, and we don't just get a weak resolution. My memory of this story is that I wasn't that impressed, so I'm worried that the second half is going to be a major let down, to balance the brilliant of the first half and lead to that feeling, but we'll see.

Final Words : Well, one episode to go until the finale of season 3 of Rebels, and I can hardly wait. Even though it's only been just over a year since I originally watched these episodes, I'm really getting to enjoy them with a fresh eye, spotting things I never noticed, and seeing things that connect to Clone Wars, which I was never aware of during my original viewing.
I do feel some sadness, knowing that we've only got 1 season to go, and that most of that season is two parters, so we've got a very limited number of stories to watch now.