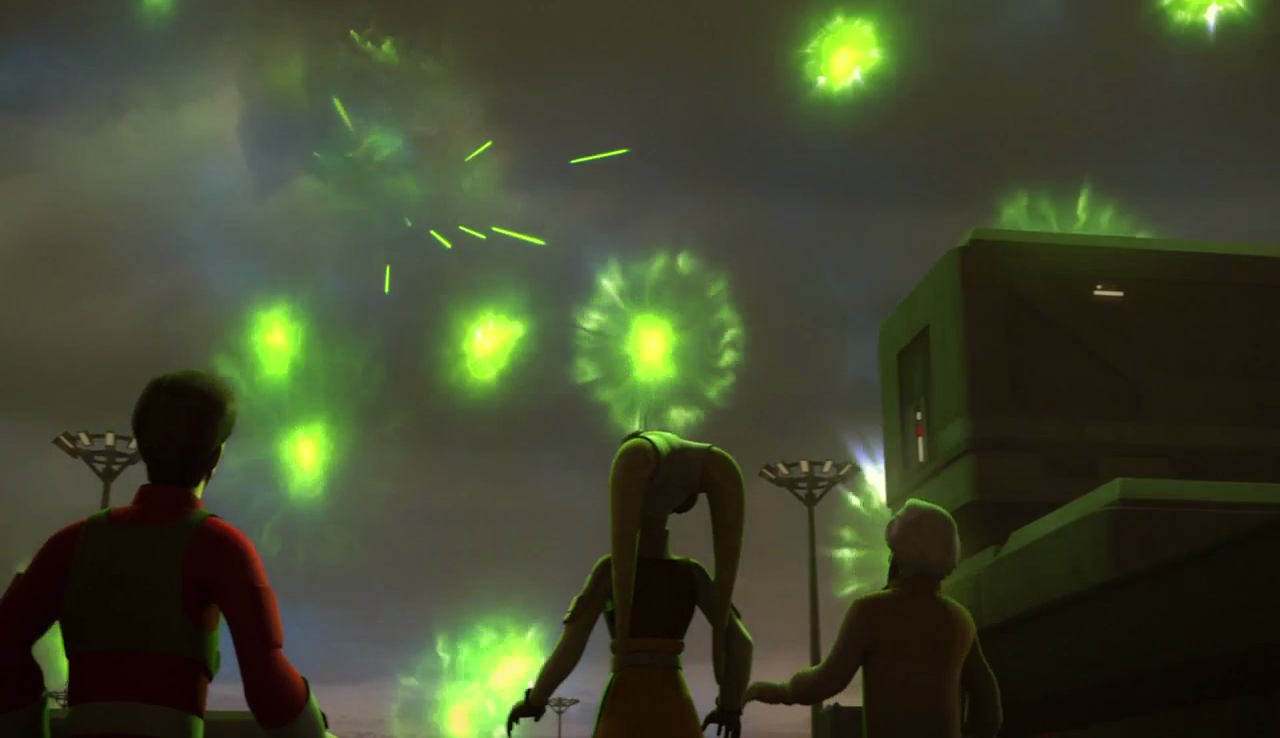 What is it ? : With the Rebel fleet having retreated to the surface of Atollon, Rex and Zeb work on activating the force field that Sabine was installing, an activate it, just as Thrawn orders the bombardment of the planet surface. Fire rains down on onto the planet, destroying everything around the base, even Kanan's speeder bike gets destroyed as he races to return to the base, although his reflexes allow him to avoid being hit.
As the Turbolaser fire batters the shield, the generator starts to shake and heat up, and everyone braces for it to fail, but Thrawn ceases the bombardment and orders a ground attack.
As they sense the ground attack coming, Rex, Zeb and General Dodonna plan the defence of Chopper base. Kanan reaches the base, and watches as storm clouds begin to gather overhead.
Ezra arrives at Krownest, and discovers that clan Wren is locked in combat with Clan Saxon, and that they have no forces to spare. However as Ezra plans to return alone to Atollon, Sabine says she must come with him, and Ursa Wren says that her clan owes the Rebels a debt that she must repay, so orders a minimum defence of the compound with the meagre amount of soldiers freed up to go with Ezra and Sabine.
The Rebels have determined the best route that the Imperials will use to approach the base, so have mined it, and as the Imperial AT-DP's come along the valley, they activate the mines and pick off the stragglers with Missiles. However, this was just a test, and Thrawn orders his AT-AT's to move forwards and to destroy the minefield, forcing the rebels to perform a fighting retreat. Kanan destroys an AT-AT with his lightsaber, and A-Wings provide cover from overhead, but are chased off by Tie Fighters after Thrawn orders them to clear the skies of that annoyance.
With it clear that the base will fall soon, Hera orders the fleet back into space, remaining behind awaiting her friends, who are fighting their way through the tunnels beneath the base.
Meanwhile in space, the Mandalorians arrive, providing fighter cover to a transport that drops off Ezra and some armoured Mandalorians onto the hull of the remaining Interdictor cruiser, although they are intercepted by jetpack wearing Stormtroopers.
As Zeb, Rex and Kanan return to the base, they find it being overrun, and the shield generator is destroyed by Stormtroopers, as they reach Hera and General Dodonna, they are surrounded by Death Troopers, and Thrawn calls for Hera's surrender on threat of the death of her friends starting with Kanan.
Kanan draws his lightsaber, but is visibly shaken by the storm that now rages around the base, which Thrawn comments on, and Kanan tells him that he should also fear the storm.
As Kanan tells everyone to grab onto something, a lightning bolt narrowly misses Thrawn, and Bendu's glowing eyes appear in the storm as it destroys two AT-AT's.
In the Chaos, the Rebels slip aboard the Ghost, and take off, with Bendu striking the ship with lightning and destroying one of it's A-Wing escorts. Thrawn orders his forces to attack Bendu, and under concentrated fire, Bendu falls out of the clouds.
In orbit, Hera calls on Ezra to hurry up in taking down the interdictor, and under fire it's gravity well generators begin to explode, as the Mandalorians and Ezra jet pack aboard their transport once again.
The Rebel fleet begins to flee into Hyperspace, while Agent Kallus still under restraint aboard the Chimaera, mocks Governor Pryce that Thrawn will be angry with her, and she orders two stormtroopers to take him away to the cells. He easily overpowers them in the turbolift, and boards an escape pod, transmitting his signal as Fulcrum, which is detected by the Ghost, and it swoops in to collect his pod before the group escapes to hyperspace.
On the surface, Thrawn approaches the fallen body of Bendu, inquiring who he is, Bendu predicts Thrawn's defeat at many tentacles surrounding him, and tells him that he is beyond Thrawn's ability to kill, which Thrawn comments that it doesn't look like it as he fires his blaster into Bendu, who disappears before the shot can hit.
Aboard the Ghost, Hera promises the help of the remains of the fleet to the Mandalorians, although she must take survivors to Yavin, and Ezra bemoans the loss of everything and the fact that their strike on Lothal has failed before it started. But Kanan points out that they're still alive, and that they must build their future from here, that their freedom is in their hands, but it's up to them to ensure it happens.

High Points : The start of the episode begins with the Star Destroyers in orbit firing on the base, and it's breathtaking, the amount of laser fire coming down like rain on the surface of the planet. Wave after wave after wave of fire smashing down onto the shield and the surrounds. The way the generator began to struggle, glowing with heat as it absorbs the incoming fire and can barely deal with it. It's a tense moment, and a visually stunning one, as the sheer firepower of Thrawn's fleet is brought to bear on Chopper Base on the surface of Atollon.

It is soon followed by the battle of Atollon, which although allows the Rebels a small victory in defeating the AT-DP's, but is soon just a fighting retreat as the again overwhelming forces of the Empire are brought against them. The Rebels stand no chance of victory, just a chance of surviving this battle. And that is part of the nature of this episode, how grim it is.
The two parter began with them preparing to make a strike against the Empire, and now they must struggle to survive. Their forces are stretched to the limit with them calling in favours, just for some of them to make it out alive. At the end of the episode, the fleet they were part of is devastated, with their carrier lost and only one of it's escorts remaining. With Commander Sato lost, it's clear that the Spectres will now be absorbed into one of the other Rebel cells, probably General Dodonna's, and their days of operating independently are now over.
The episode leaves us with hope for the future, but so much has been lost, a grim ending to the season, but a riveting one.


Low Points : My only real complaint about this episode is Bendu, while he is characterised somewhat more reliably during this story, and just wants everyone to leave his planet. His power level seems a bit erratic, he is all powerful, but falls from the clouds when shot at, then easily avoids Thrawn's final attack. If he can avoid attacks by disappearing, why didn't he do that with the earlier attacks.
Or am I totally reading his final scene wrongly, instead of disappearing and mocking laughing at Thrawn because he is beyond Thrawn's power. Is he doing an Obi-Wan, and fading into the force, and mocking Thrawn because Bendu lives on through the force?
Whichever, I wasn't keen on Bendu's portrayal, and am a little confused by it.


So what do you really think ? : A great episode, and a fantastic, if very dark, ending to the season. We're left with the Rebel's debt to the Mandalorians to come, and whether they can raise any kind of effective assault on Lothal with their forces so devastated. Whatever may come, there's a lot of storylines to finish off during Rebels final season.

Final Words : Well, one season to go and I've finished all of the new animated series. After that, should I go back to Star Wars Droids, or Ewoks? We've got Resistance now broadcasting, and new Clone Wars to come, so interesting times lie ahead.