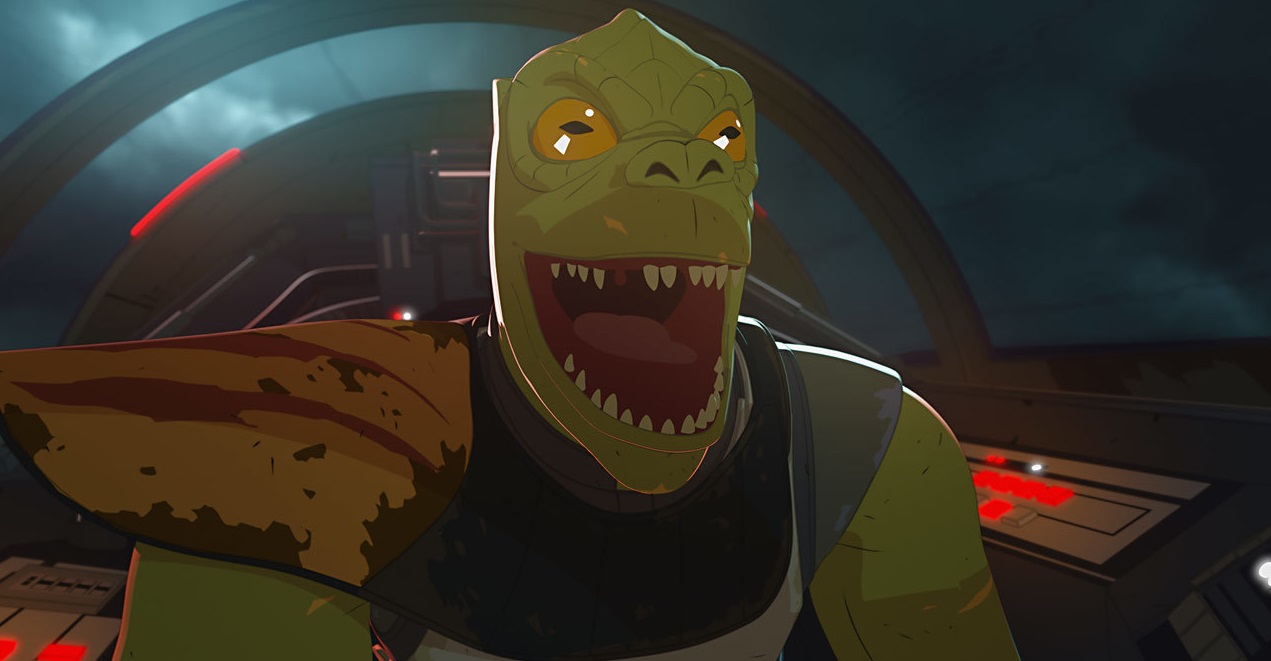 What is it ? : Kazudo is looking through the small bag of items he has brought with him, and tells BB-8 that if he'd known he was going to be going on a long term mission he would have brought more things from home. The main item amongst his bag is a trophy he won for piloting, which is made from Aurodium, which is more valuable than Gold. Neeku arrives and looks at wonder, saying that Kazudo has so much to remind him of home, and tells him a story of how he once had a pet to remind him of home, but it died and he ate it.
Kazudo goes to work for Jarek, thinking it will only be cover, but Jarek expects him to earn his keep, but Kazudo has no idea about being a mechanic and messes things up, much to the annoyance of his co-worker Tam Ryvora who looks upon him as if he is trying to steal her job.
A Neimoidian arrives in a Sheathipede shuttle looking for repairs, and Kazudo thinks he is acting suspiciously and may be an agent for the First Order, and after making a fool of himself, he is sent for supplies, but instead trails the Neimoidian. He runs afoul of Grevel, who wants to take his trophy as payment, but he hides in a crate to avoid detection, which gets dumped down a vent into the supply shop run by Orka and Flix, called The Office of Acquisitions.
After Tam turns up looking for him for taking so long, he returns with the parts to the repair shop, and some of his work sets off an alarm causing the returning Neimoidian to drop his commlink into a vent, the annoyed Neimoidian then leaves in his ship, saying he'll take the cost of the Commlink from what he pays Jarek, and Jarek says it'll come off what he pays Kazudo.
The Neimoidian turns out to have been spying, but for a group of pirates who arrive in a heavily modified Lambda class shuttle and a group of fighters to attack Colossus station. The defence forces rally, but Kazudo is stuck outside the station with Grevel after the blast doors close, and they are tossed around by explosions, with Kazudo ending up on the cockpit of the Lambda at one point. before falling back to where he started. BB-8 opens the blast doors, and Kazudo gets through but as they close, Grevel is going to be stuck outside in the attack, so jams the door with his trophy which gives Grevel time to get inside but squashes and deforms the trophy.
Kazudo realises that the Neimoidian was involved with the attack, and his Commlink must be on the attackers frequency, so returns to the hangar to retrieve it, but cannot reach, so BB-8 gets it. Putting feedback through the Commlink causes the attacking Pirates controls to begins to spark and malfunction, so they abort the attack, and as Jarek and Tam return from the shelters, they find that Kazudo has been working on the Fireball, which malfunctions turning him once more into a joke.
Meanwhile, the Red Ace pilot from the first episode, Elrik Vonreg, and Captain Phasma hear from the pirates who they hired to take out Colossus base, and threaten them for their failure.

High Points : The standout element for me in this episode was the Lambda shuttle that the pirates use, it's heavily modified with the hull stripped away revealing the machinery beneath and is covered with additional weapons and even blades giving it a Mad Max vibe. We've not seen anything like this in Star Wars before, and if the patched together aspect of this vessel and the Fireball are what we're going to get, it's going to be quite an interesting visual feast as the show goes on, showing the difference between the First Order, New Republic and Resistance with their store bought streamlined vessels, and everyone else who just gets bits of older ships and bolts them together.

And this may be a case of damning with faint praise, but after moaning about BB-8 being a pointless addition to the show, in this episode he actually serves a purpose, not only unlocking a door, but retrieving a Commlink. Both of course could have been done by any Astromech, but at least he's getting involved and not just showing up to add some star power to the series.

Low Points : I'm guessing that this is a bait and switch, but at the moment Kazudo is being treated as a joke, his rescue of the entire base is not noticed by anyone, his trophy for good piloting is destroyed rescuing an unappreciative opponent, and he falls over and sets off alarms, even though he's supposed to be a trained combat pilot. At one point he even gets blown up, lands on the outside of the cockpit of an enemy ship, and slowly slides off it as they watch.
My thirteen year old son called it "Cringey", and I find it difficult to disagree, it's painful to watch.

When we were introduced to Kazudo, he was just on a data delivery mission, so it turns out he has left much of his life behind. There's only the contents of his backpack, which makes sense. He's cut off from his past, and only has a few personal effects he always carried with his to link him to that past. And one of those items he always carried around, that he packed in his backpack for a delivery mission was . . . his trophy for piloting?
It does succeed in making Kazudo look incredibly childish, as if he always carried around this trophy everywhere, it would have made far more sense if it was a medal he could have always carried, but nope he's got his trophy.

But as I said above, I'm guessing this is a bait and switch, that he will prove himself to everyone, and it'll be a feel good moment. And the jokey treatment of him will make the tragedy when his family dies all the harder (remember his dad is a Senator for the New Republic, Kazudo's family comes from Hosnian Prime, and we're only six months from The Force Awakens when Starkiller base is set to destroy that world and kill the leadership of the New Republic).
Could this all be a plan to switch up the series for something far more serious when the events of The Force Awakens occur? Will things take a much darker turn as Kazudo ends up being virtually the last sole survivor? Could they be setting up that Resistance cells exist across the galaxy, so the end of The Last Jedi isn't as dark as it first appeared?

So what do you really think ? : The episode was fine, far to childish for me, and too childish for my 13 year old son. Much of the action is silly, and while there seems to be some interesting stuff set up for the series none of it is being exploited to tell good stories (what's the deal with the ex-tie fighter pilot who flies a racer based on a Tie Fighter and what's his relationship with The First Order, what's Jarek's story, he's an ex-Rebel pilot, what's his problem with the Resistance?).
The series has to improve quite seriously if it's going to stand a chance of being as good as The Clone Wars or Rebels.


Final Words : The Star Wars animated series have always been something I've shared with my youngest son, throughout Rebels, we sat together and watched every episode, and we were looking forwards to doing the same with Resistance.
But unless it gets better quickly, then it's going to end up being something I watch myself, my son finds it difficult to bare to watch, that it's embarrassing and cringey, And if the series can't hold a 13 years olds attention, then I don't hold out much hope for its future.