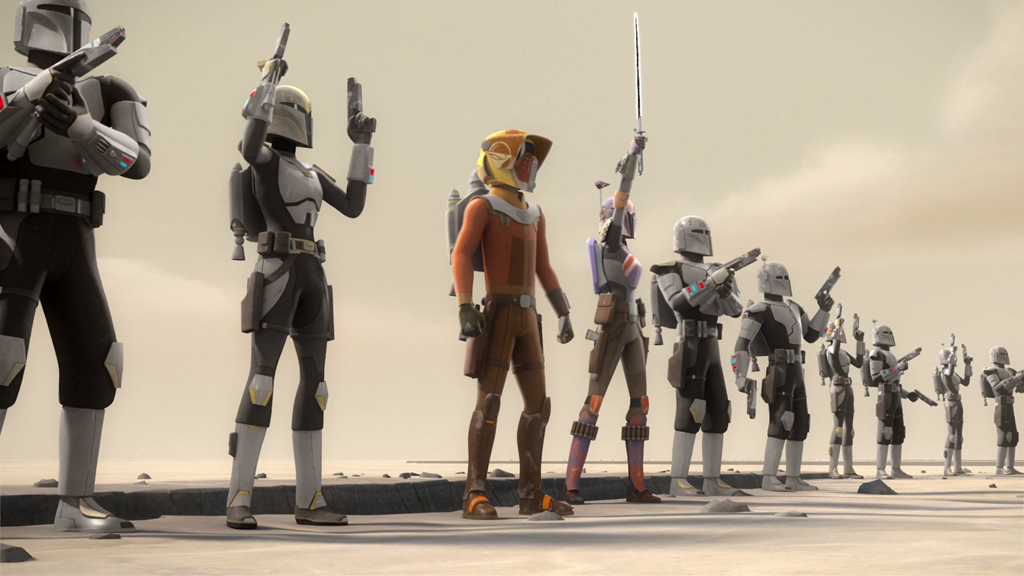 What is it ? : At the end of last season, the Rebels swore to repay the Mandalorians for their help at the Battle of Atollon., and we start this season with Kanan, Ezra and Sabine on Mandalore fighting side by side with the Mandalorians. Sabine wielding the Dark Saber, leads an attack on an Imperial Prison aiming to rescue Sabine's father, The attack goes well, until AT-PD's are deployed and Sabine is knocked to the ground where Stormtroopers threaten her life unless Ezra and Kanan surrender. They prepare to surrender, when more Mandalorians arrive on Jet Packs, and fire missiles at the walkers, allowing the attacking forces to rally and capture the prison.
They search it, only to discover that Sabine's father is being transferred to the capital city for execution. Their rescuers are revealed to be led by Bo-Katan Kryze, who tells them after the death of her sister Duchess Sabine, the Jedi put her in charge, but when she refused to work with the emerging Empire, they replaced her with the treacherous Saxon clan. Satine offers her the Dark Saber as the true leader of Mandalore, but Bo-Katan refuses it, saying she had her chance and failed.
They discover the location of the Imperial convoy shipping Sabines father to the capital city, and set off to defeat it, coming up with a plan to attack the convoy, forcing the prisoner transport to retreat, then ambushing it when it is separate to it's defenders. They trigger the attack, and Ezra gets aboard the prisoner transport and rescues Sabines father, with them leaping off just as the transport crashes off the edge of a ravine, plummeting into the jagged depths below.
As Sabine is reunited with her father, they hear of an attack on her mothers forces by a single Walker, which Sabines father recognises the description of as carrying a weapon designed by Sabine.
They rush to the site of the battle after communication is cut off, only to discover that all of the Mandalorians, have been vaporised with only remnants of their armour remaining.

High Points : The season jumps straight into action, with Sabine heroically leading a Mandalorian attack, and they don't waste any time on unnecessary exposition, and with only a brief pause to explain Bo-Katan Kryze and what she's been up to since we last saw her in The Clone Wars Series, we're straight into another action scene.

And what an action scene it is, by now we're very familiar with Imperial Troop Transports and their Speeder Bike escorts, so this scene is fairly familiar, but we get a lot of classic moves from the characters, fighting as they race along. And although it may not be anything new, by this point in the series it's very slick and well done.

It's great to see Bo-Katan Kryze reintroduced, although given where we saw her last, I was somewhat surprised to learn she had been made leader of Mandalore, as she had been a member of The Death Watch at the time.

We also get to see Mandalore itself in more detail, it's ravaged surface, covered with chasms which we can only guess have been caused by weapons either raking across the surface of the world, or the planet shaken and cracked by titanic explosions. It's an evocative setting as the Rebels and Mandalorians enter yet another series of battles on this world with such a long history of being consumed by war.

Low Points : The one element of the episode which stuck out was the main characters poor execution of the attack on the prison, they are about to be captured when they are rescued by the arrival of Bo-Katan and her forces. Which given the experience of the characters by this point is a little disappointing for them to be nearly defeated so easily. The story needed a heroic way of reintroducing this character, but the way it did so at the expense of the competence of the main characters didn#t feel right to me.

So what do you really think ? : A solid, if slightly uninspiring return to the series for it's final season, perhaps I'm judging the episode harshly due to my lack of interest in the Mandalorians, but even then, it's action packed, the story keeps moving, and we get a return of both Mandalore itself and Bo-Katan Kryze, who haven't been seen since the fifth season of The Clone Wars series.

Final Words : I've decided to review the episodes separately, rather than as the two part mini-movies that this season seems to be made from. When originally broadcast, two episodes were released on the same day, so the two parters were seen back to back.This would make this final season a lot quicker to review, with it only having 8 stories, but a lot more labour intensive for me. So I'll be keeping it to seperate episodes, although I may change that for the series finale.