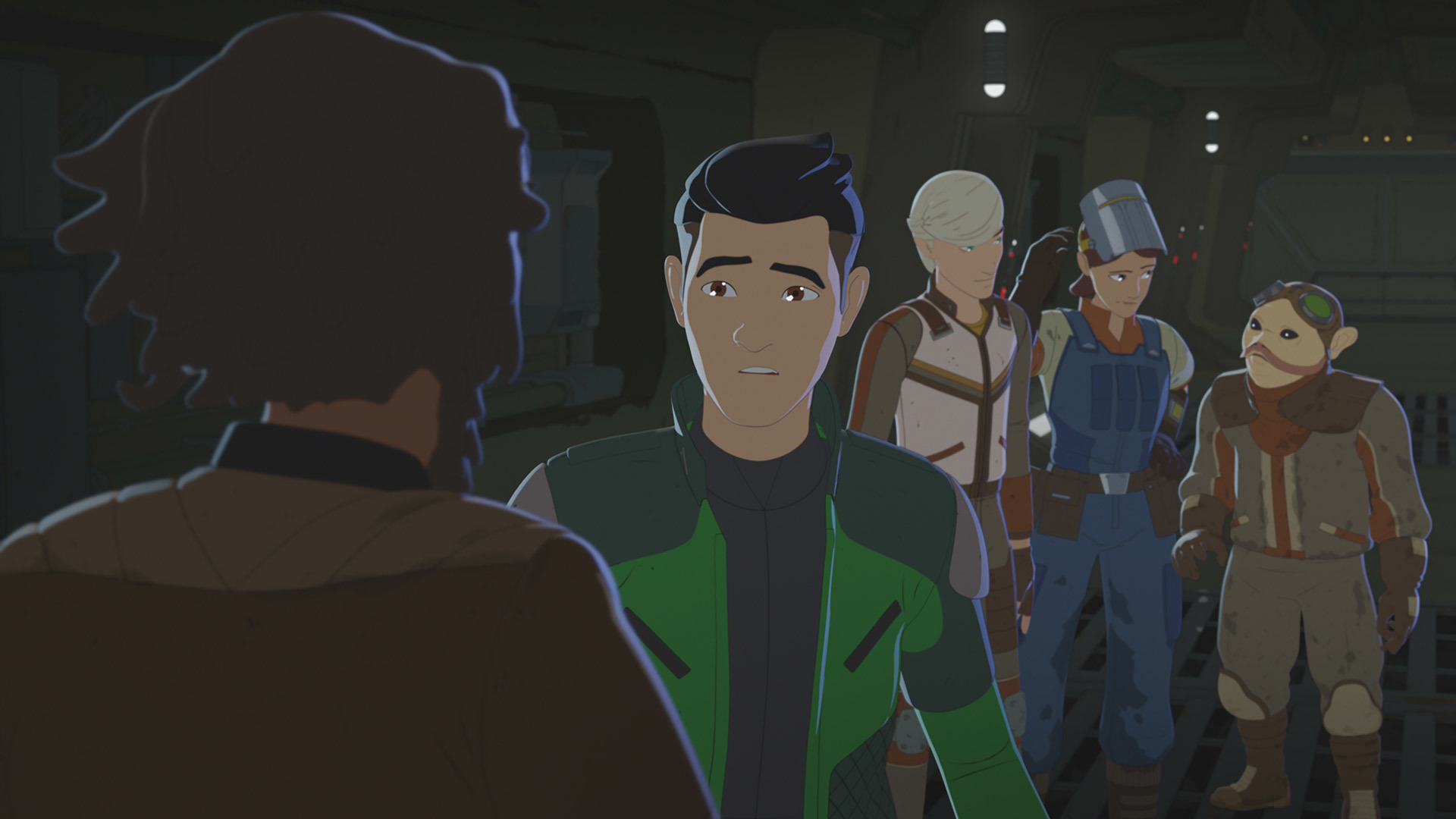 What is it ? : Kazuda has finished fixing the engine for the fireball, and is ready to impress his colleagues when it fails once again, so Jaeger orders him back to work while the rest leave to watch the latest race. Kazudo decides that while he must work, he can do so outside while watching the race, but while he is distracted by the race, the engine and the repulsorlift platform it is on slides off the edge of the landing platform into the sea.
As they winch it back aboard, Jaeger tells Kazuda off, and Kazudo complains that all he wants to do is help the resistance, he's sorry if him wanting to help the galaxy is inconveniencing Jaeger, and he leaves.
Later at the bar, Kazuda is considering whether staying with Jaeger is his best option, and he gets propositioned by a Gotal wanting him to live with it. He also meets Jace Rucklin and his team, Lin and Gorrak. They discuss racing and Jace compliments Kazuda's skills, and mentions that Jaeger has another racer, a better one than the Fireball.
They head through ducts in the station down to where a couple of Speeder Bikes are stored, and Jace and Kazuda have a friendly race, but Kazuda's bike overheats, and he is rescued by Jace. After they return to the station, Kazuda is scolded by Yaeger for taking too long on his lunch break, and Jace and his companions discuss how that went exactly to plan.
Back at the repair shop, Yaeger complains that Kazuda isn't pulling his weight, and although he promised Poe Dameron to take him in, he's regretting it. Kazuda responds that he didn't know taking a long lunch would cause so much trouble, that he was just making new friends with Jace and his team. Neeku warns that Jace and his team just like having fun, and don't like hard work, before Kazuda distracts him and sneaks off to see his new friends.
Jace and his team are working on their racer, and they say how they've been stripping it down to make it lighter and faster, and mention how it would be faster on Corellian Hyperfuel, and talk Kazuda into sneaking them into Jaegers shop so they can sneak a peek at Jaegers other racer.
Jace and Kazuda sneak in, but cannot get access to the other racer, but Jace takes advantage to steal a can of Corellian Hyperfuel and leaves, BB-8 expresses concern over what Kazuda has done, but Kazuda is sure no harm was done since they didn't even get to see the racer.
Later during stock control, Bucket realises that the fuel is gone, and Kazuda realises what's happened, and overhears Jaeger mentioning how dangerous the fuel could be, so he races off to try to stop Jace.
Jace pours a large amount of the fuel into his racer, and prepares to launch, just a Kazuda arrives, leaping onto the racer as it streaks out of the station. Kazuda opens the cockpit and activates the eject, and the two fire into the air on the rocket propelled ejector seat as the racer explodes in the distance.
As the rockets expend their fuel, they drop towards the sea. and Kazuda discovers that Jace and his team have removed the parachute for weight reasons, but the two are saved by BB-8's grapple line. The little droid struggles to pull them up, but with Jaegers help they are saved. Kaz and Jaeger scold Jace for stealing the fuel, which Jace says they can't prove and he storms away claiming this isn't over.
Jaeger sends Kaz back to work, although Kaz is surprised he isn't kicked out, and Jaeger tells him that he may not be a good mechanic, or even a good spy, but he is a good person. Kaz is even more surprised when Jaeger orders him to work outside where he can watch the races. But again, while distracted, the engine parts he is working on slide into the sea on their repulsor platform.

High Points : The highlight of the episode is definitely the speeder bike race between Kaz and Jace (voiced by Elijah Wood, and where they're racing to be the first to the ring! a nod to Lord of the Rings perhaps?). It's an excellent action scene, only enhanced by the danger Kaz ends up in due to the sabotage that Jace and his team have performed on the bike to make Kazuda trust them after they rescue him.

The character of Neeku is growing on me, I found him annoyingly innocent in the first couple of episodes, but the joy he finds in searching for the correct tool when Kaz uses that to distract him and sneak out I found infectious, and while I forsee him being a terrible liability for Kazuda being a spy, I think he is one of the better aspects of this show so far.

Low Points : I thought this show was supposed to be about racing or spying on the First Order because so far it just seems to be all about life lessons. Although last episode, we as viewers learnt about the connection between the pirates and the First Order, Kazuda himself hasn't learnt a thing. Kazuda has proved himself an excellent pilot, nearly beating one of the main racers in the Fireball, a failing wreck of a ship, yet he's relegated to being a mechanic, a role he is poorly suited to and constantly mocked over being poor at.

The main lesson in this episode seems to be about not trusting people who are nice to you as they are probably taking advantage of you, even Neeku, the most trusting of the characters describes them as "lazy, always laughing, pulling pranks on others, and not focusing on their work." He adds that they have all kinds of fun and are the worst. Because no one has fun except the worst type of people . . .

And once again the episode makes Kazuda the target of all the jokes, with even the bartender saying that the biggest mistake of their life was meeting him. If Kazuda cracks in a future episode, and goes on a murder spree, stalking and killing everyone aboard the station, I won't be too surprised. The only person who has been nice to him is Neeku, all the rest of his coworkers, including the droids are constantly down on him instead of the supportive family that we saw in Rebels.

And finally, we get some thawing of the relationship between Jaeger and Kaz, with Jaeger calling him a "Good person", just after he has snuck out of work, and helped Jace break in and steal the fuel. While I think that Jaeger has been a bit of a dick to Kaz so far in the series, I can't see where Kaz's behaviour leads him to suddenly think better of him. While Kaz has tried to save Jace, Jaeger wasn't witness to that, so can't say why Kaz ended up on the fighter with Jace.

So what do you really think ? : While Resistance is still struggling to put it's team together and find a tone that works for it, I have to admit I did find this episode far more watchable than the previous two episodes. The story flowed much more smoothly, and it does seem to be settling down into telling it's story, although is still hampered by having to introduce so much.

Final Words : There's not a lot much more to say about this one, the show finally displays that it might have something going for it, but still seems stuck into doing childish jokes at the main characters expense. When everybody is being so antagonistic towards him, we're still supposed to be finding them appealing enough that we'll accept them as parts of the team. But you can't really have it both ways, they can't be nasty to the only person we relate to in the show, and still have us like them.
Oh well, I guess we'll have to see how it all works out, or if it all works out.