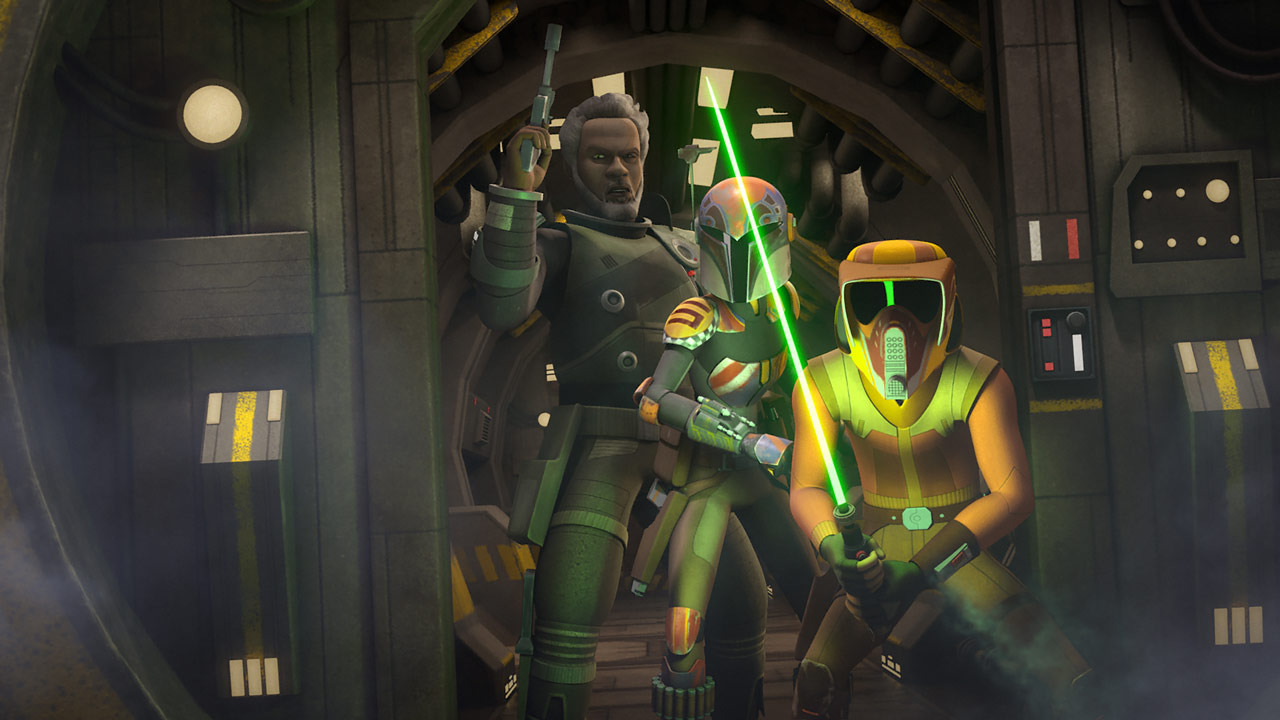 Star Wars Rebels: Season 4 Episode 4: In the Name of the Rebellion part 2

What is it ? : Ezra, Sabine and Chopper are aboard Saw Gerrera's U-Wing, and he tells them that they can either return to the Rebellion, or they can help him do something that might make a difference. He has heard that a cargo shipment for the same secret project which led to the population of Geonosis being wiped out for, is being shipped through a civilian station.
They agree to help out, and they slip onto the station, and pack themselves in Cargo containers to be moved onto the cargo vessel. Once loaded they search the cargo hold they are in and find only parts which could have come from any starship construction facility, but exiting that hold they see Stormtrooper patrols on the civilian vessel, so decide that Saw's information could have something to it.
Continuing their search, they discover a secure hold and knock out the Stormtroopers guarding it, within they find prisoners being shipped. Sabine and Ezra seemingly convince Saw that they should sabotage the ship to take it out of Hyperspace, and let the prisoners leave the ship in escape pods. They start moving through the ship towards the engine room, while Chopper takes the prisoners to the escape pods.
However Ezra hears something that the others cannot, and leads them into a side room where Carbonite mist hides the cargo, but is protected by Death Troopers. The fighting is signalled to the bridge, which jettisons the escape pods to stop the rebels escaping, so Chopper takes the prisoners to the shuttle bay instead.
As the mist clears after the battle, Ezra, Sabine and Saw discover the ships cargo is a giant Kyber Crystal, and Saw argues they must find out where this crystal is being taken, but Sabine and Ezra seemingly convince him that the prisoners lives are more important, so they head off to the engine room to disable the hyperdrive. They fight the guards and get into the engine room, when they are ambushed and stunned by Saw.
As they emerge from Hyperspace at their destination, they can see that it isn't the final destination of the cargo, just a transfer point for it to be put aboard a Star Destroyer for final delivery. Saw takes Ezra's lightsaber and stabs it into the crystal destabilising it, and sets Ezra and Sabine free.
The Star Destroyer sends reinforcements to the freighter, but Saw's U-Wing arrives and docks safely, rescuing him, as Sabine and Ezra board the shuttle along with Chopper and the prisoners and flee the freighter as the energy discharges from the destabilized crystal start to smash the ship apart.
Not having time to jump to hyperspace, Sabine flies around the Star Destroyer, intending to use it as cover from the explosion, however, when it does explode, the Destroyer itself is torn to shreds, and the blast wave hits their shuttle crippling it.
As they float in space, the Ghost emerges from hyperspace, and Ezra waves to it as Sabine shakes her head. Aboard the Ghost, Hera tells the prisoners that the Rebellion will make sure they get home, but the prisoners tell her that since their skills were of use to the Empire, perhaps they can help the Rebellion too, and they all decide to join.

High Points : There's a certain amount of cat and mouse between the Rebels and the Imperial officers aboard the freighter, as the Rebels plan to escape using the lifepods, but the Imperial jettison them, etc. A feeling that the Imperials aren't totally passive participants in the story, they are trying their best to win, and that makes the story feel far more interesting.

Low Points : My main problem in this episode is Saw, while I can get the difference between his lust for revenge on the Empire, and our heroes want to fight the Empire to better the galaxy. I find his actions irrational and lacking in planning, for example his decision to destroy the Crystal he puts into motion before even his ship arrives. Instead of waiting until he can escape, and helping Ezra, Sabine and the Prisoners escape, then starting to destabilize the crystal, he starts the events in motion, and luckily everything happens that leads to him and the Rebels escaping.

Oh, and I must comment on a missed opportunity that could have improved this episode, next time we encounter Saw, he's missing parts, has some cybernetic replacements and breathes through a machine. Wouldn't now have been the ideal time to show him getting wounded and needing the operations which lead to him being in that situation, chronologically, we're only a year or so before the events of Rogue One, so there's not a huge amount of time for everything to happen to him, and better it happened on screen that be detailed within some novel or comic book.
However, didn't happen, but would have been nice if it did.

So what do you really think ? : It's a fairly solid episode with great action, but what Saw needed to be was a charismatic leader, who was right in his beliefs, but without the moral compass to know where the line is drawn that he shouldn't cross. However in this episode (and the last one he was in), he is constantly shown other ways of doing things, but just decides to not do it that way. Not trying to convince anyone of his plan (for example, here he pretends to agree with Ezra's and Sabines plan, then stuns them and goes with his own plan), he comes across less of a great leader and more of a stroppy teenager who doesn't get his way, so disobeys his parents.

Final Words : It's a bit late in the series to be showing Ezra learning lessons of temperance and wisdom, by this point we've seen he knows these things already. He's been tempted by the Dark Side and come back, he's made decisions to help other worlds, knowing it strengthen the Rebellion and will help his world in the long run. But here we have him acting like he did at the start of the show and needing his companions to prove themselves right before he trusts them over some hero of his.
It's very disappointing for a series with such good characters, for the growth to be ignored.