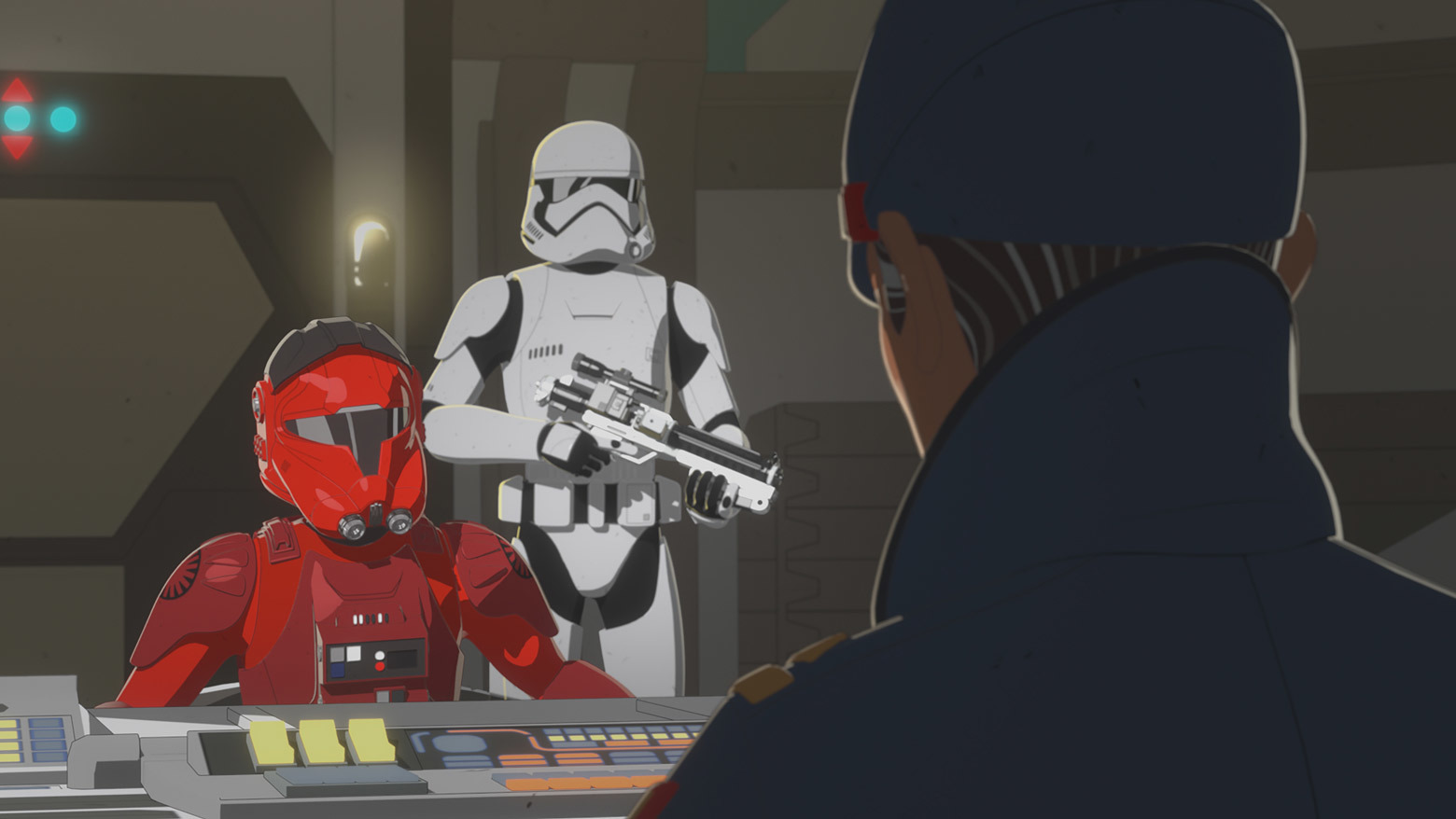 What is it ? : The episode begins showing Colossus station standing high over the planet wide oceans, when it's lights flicker and go out. Cutting within, Kaz, Neeku, BB-8 and Tam complain about the power shortages, that once again the station is being put on low power mode and no work can be done. Kaz heads to the bar with his comrades, and overhears rumours that the First Order are behind the power cuts, because the Commander of the station, Immanuel Doza received secret visitors during the night. Kaz spots one of the Racers who live within the tower, and after hearing that Tam used to be friends with him, tries to exploit their relationship to gain access to the racer and through him, access to the tower to investigate the First Order connection.
Afterwards, he heads outside to watch for the ships which bring the visitors who meet with the Commander, and after being followed by Tam and Neeku, they watch a shuttle arrive, and the Red Armoured Pilot from the pilot episode head into the tower escorted by Stormtroopers.
Meeting with Tam's pilot friend, they find that he wants to try to patch things up with Tam, who is resistant to his efforts, but Kaz accepts on her behalf and they gain access to the tower.
Kaz sneaks off, and goes to the Commanders office, bugging a droid which is taking drinks into the office, letting him overhear that the First Order is offering help to fight the pirates which are stopping the fuel supplies from reaching the station, forcing the power cuts which have been plaguing it recently.
The commander refuses, telling them they need to offer more than just protection against one or two attacks, and the meeting ends.
Kaz is spotted sneaking away from the meeting, and runs away, ending up in Torra Doza's quarters, she is the pilot he raced in the first episode, and the daughter of the commander of the station. She helps him escape through a window, and Kaz ends up climbing around the edge of the tower, under fire from Stormtroopers.
The occupants of the bar spot him, and begin gambling on his imminent death, Kaz escapes and returns to the repair shop, as power is restored to the station, leading him to believe that some kind of deal has been struck with the First Order.
Meanwhile, the commander of the station reviews security camera footage, and wonders who Kaz is.

High Points : Well this is a definite Improvement on the series so far, they ease off on the constant abuse of Kaz, they actually move the story forwards, and it actually features the First Order (if you could imagine Rebels not featuring the Empire for the first 4 episodes, or the Clone Wars not featuring the Clone Wars, without the First Order, who are they actually Resisting?)

Yes, we finally get some movement in the storyline, admittedly it's only a tiny step forward, but I'll take what I can at this stage. We discover the Pirates who are sponsored by the First Order are basically a protection racket. Join the First Order, or it'd be a terrible shame what could happen to your station, seems to be the tactic they're using.
But this seems awfully softly softly for the First Order, since we know from The Force Awakens that they kidnap children to train into Stormtroopers, why don't they just invade and be done with it if they want the station?

Kaz acting as a spy is surprisingly resourceful, bugging a droid to listen into the meeting, and manipulating Tam to gain access to the tower, but the high point of the episode was definitely the action on the outside of the tower as he descends. Kaz leaping from ledge to ledge as Stormtroopers shoot at him, and the inhabitants of the station taking bets on the action worked well.


Low Points : The progress into any kind of plot seems slow, I can see things developing here and there, we've now got Tam being connected with a racer, the revelation that the racers also have to serve as defenders of the station, and that the First Order is acting as a galactic protection racket, taking over from the Republic by creating threats that only they can protect against.
But it's still very slow, there's loads of characters doing nothing (we've hardly met the racers, who were very prominently mentioned in the pre-publicity for the show, so either we've been misinformed (like we were with Captain Phasma's importance in The Force Awakens, so there is precedence for it), or they've yet to be properly introduced. Even Yeager who has been relatively important until now wasn't seen at all in this episode, and this is the first time we've seen Torra since the pilot episode.

So what do you really think ? : Well, it's not as bad as it has been, and there's not a lot else I can really say for this episode apart from that. And even that faint praise is only because of the dreadful episodes which we've seen so far.

Final Words : Hopefully there's going to be some movement in the storyline, and something to get our teeth into, I'm not sure if I can be bothered with many more episodes about Kaz messing up jobs in the repair shop.
Star Wars is supposed to be space battles, and lightsabers and heroes, not the day to day drudgery of an apprentice in an engineering workshop.