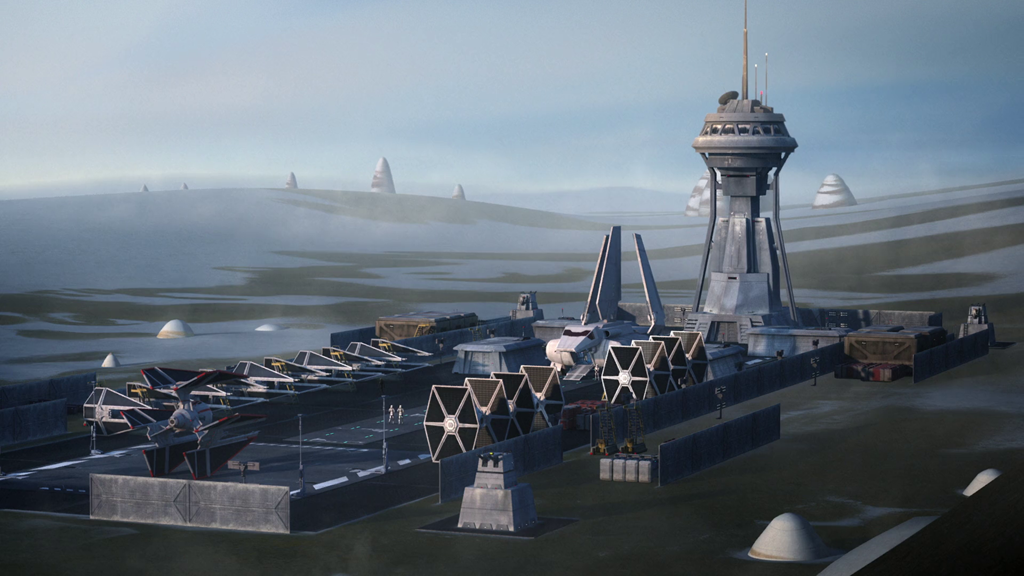 What is it ? : Ryder Asadi, Ezra, Sabine and Zeb are watching an Imperial base where the Tie Defender is supposedly being tested, and after waiting and being plagued by Loth Cats, they see the fighter arrive.
Having got the observations they need, they are supposed to leave, but Sabine decides that getting the Tie Defender flight recorder will give the Rebellion invaluable information which will help them defeat the fighter, so she sneaks down to the base with Ezra.
They easily gain access to the base, but the fighter is heavily guarded, but the guards are helpfully attacked by Loth Cats, causing a distraction and allowing Sabine to sneak aboard. While she is trying to remove the flight recorder, a shuttle arrives at the base, carrying Thrawn and Governor Pryce.
When the pilot of the Tie Defender calls on Thrawn and Pryce to inspect the Defender, Sabine asks Ezra to delay them, and as he searches for a way to do that, he spots a Loth Wolf on a nearby hill, a creature which hasn't been spotted for a hundred years.
But while he is distracted by this, he is ambushed by a Tie Fighter pilot, but the fighting does provide the distraction that Sabine needs. As Ezra fights with Stormtroopers under the gaze of Thrawn and Pryce, Sabine realises that the Tie Defender has a hyperdrive, which if they steal they can use to repair the broken one on Ryder Asadi's U-Wing, and give them access to the Galaxy again.
She uses the Tie Defenders guns to kill the Stormtroopers Ezra is fighting, and he leaps aboard, and they fly off.
Pryce offers to activate the anti-theft devices aboard the Defender to disable it, but Thrawn wants to see it tested against Tie Interceptors, so orders three to attack the fleeing ship. Ezra pilots the Defender against them, as Sabine attempts to shut down it's transponder to stop it being tracked.
Ezra easily defeats two of the pursuing Interceptors as Thrawn tries to identify the pilot, who he is told must surely be Hera, but he is not convinced as he believes Hera would have more easily defeated the Tie's. And once the transponder cuts out, he realises it must be Ezra piloting, and Sabine removing the Transponder. And if Ezra's meager skills can so easily defeat the Interceptors, then in skilled hands the Tie Defender will massacre Rebel pilots.
Ezra uses missiles to defeat the final Tie, and Sabine finds the cut out and orders him to land, but before he can, Pryce activates the system under Thrawns orders, and the Defender jettisons two of it's three wings, allowing Ezra to only make a slightly controlled crash into the surface of Lothal.
Sabine and Ezra remove the Hyperdrive, and realise they cannot escape with it, but Ezra spots an white Loth Cat, which Sabine cannot see, and finds a small cave they conceal the Hyperdrive in.
A large number of Imperial Gunships arrive and begin searching for the two, but as they hide, Ezra sees a White Loth Wolf, which puts Sabine to sleep, and carries the two unseen from the Imperial patrols and back to the Rebel base.
When Ezra asks it why it helped them, it answers only "Dume", and as the other Rebels arrive, the Wolf has disappeared.
When Ezra asks Kanan about the Wolf, he answers that everything is coming together, and when Ezra asks about that, Kanan enigmatically tells him he doesn't know, but they will find out when they get there.

High Points : There's so much in this episode, and as Kanan says at the end, everything is coming together, we've got the link between Ezra and Lothal coming to the forefront as the spirit animals of the world begin to help to freeing the planet.
Although Jedi can be seen as a religion or spiritual in some way, we've never really witnessed a spirituality in Star Wars to the level that we're now seeing. The Loth Cat's guide Ezra throughout this episode, actually providing a distraction when needed, and the Loth Wolf saves both Ezra's and Sabine's lives when it helps them escape from the Empire.

We've also got a great fight, between the Tie Defender and the Tie Interceptors sent to destroy it, and an entertaining battle between Ezra and the Stormtroopers while watched by Thrawn.
Finally we've got amazing dialogue throughout, from Zeb's sarcasm, through to Thrawn's chilling statements as he takes advantage of everything that is going on. While the theft of a single Tie Defender seems like a major victory to the Rebels, it's insignificant to Thrawn compared to the information he is gathering.

Low Points : I just spent this episode geeking out so much, that I never really noticed anything that I thought worthy of listing as a low point.
The only near thing I could think of criticising is the timing of the episode, Thrawn just happens to turn up as Ezra and Sabine's are in the Imperial base, and while this is necessary for dramatic purposes, this has happened so often before, that just as Ezra (or Sabine) are just about to do something, Thrawn arrives by shuttle.
While I totally understand the need for them to do this, it's just happened exactly the same way in several episodes, so probably should have been rethought by the writers (have him summoned by something the main characters have done, rather than co-incidentally turning up at the right time.

So what do you really think ? : As should be obvious by now, I adore this episode, and knowing better ones are coming up, I'm wondering how much higher my scoring can go.
Although the episode is mainly a series of set pieces, the action keeps moving and each of the scenes grabs your attention so much, that I could scarcely believe that the end arrived so soon.

Final Words : Thinking forwards to the rest of the season, my memory says that almost every episode from now on flows pretty much into the next, and we're now in a solid chain of stories leading to the end of the series.
I'm saddened by this knowledge, and although we've got a dozen or so episodes still to go, knowing we're into the last epic story of Rebels, makes me miss it before it's gone. But have we got one hell of a ride until the end.