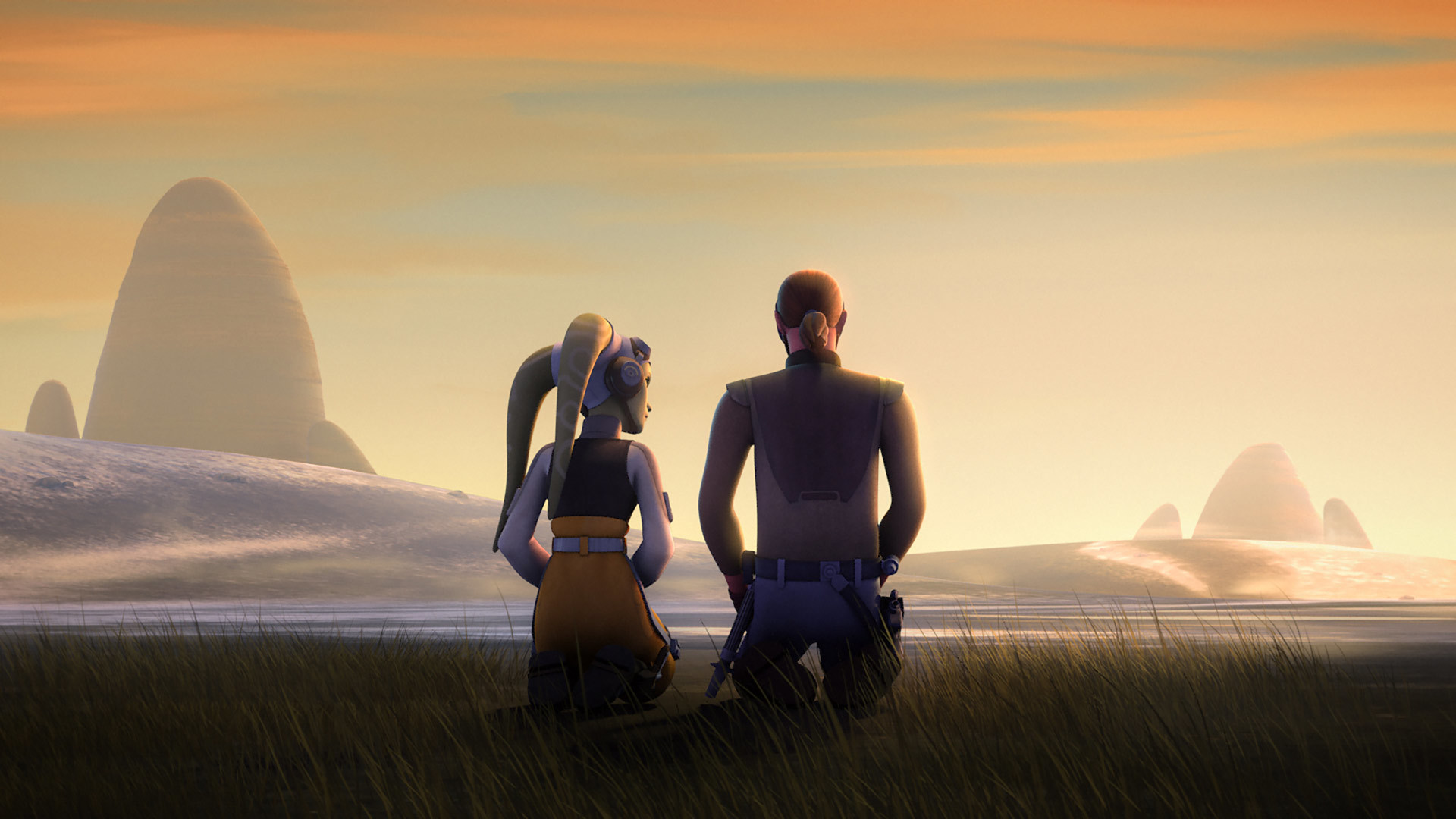 What is it ? : Kanan is meditating outside the Rebel camp, when Hera comes to speak to him, and they discuss their connection to Lothal, Hera commenting that it's Ezra's homeworld, but Kanan pointing out they came here again and again even before they met Ezra, as if they were drawn to it.
Meanwhile at the site of the Tie Defender Elite, Governor Pryce is communicating with Thrawn, telling him that the Hyperdrive and Flight Recorder were both removed, and that the Hyperdrive is too large to have been taken far so she will try to get the Rebels when they return for it. Thrawn informs her he is sending his agent, Rukh, to aid her.
Nearby, Ezra and Jai Kell, disguised as Scout Troopers are with Zeb, recovering the Hyperdrive, but Ezra cannot clearly remember where it is, but they are guided to it by a Loth cat, much to Zeb's chagrin.
Rukh arrives and walks past Pryce, commenting that he can smell Lasat, and he races off towards the distant figures of Zeb, Ezra and Jai.
Jai warns the group that Rukh is approaching, and Ezra uses his disguise to try to distract Rukh, but fails, forcing the two to flee on a Speeder bike. Meanwhile Zeb steals an Imperial Troop Transporter to carry the Hyperdrive back to the Rebel camp.
Ezra duels Rukh as they speed along through the canyons and ravines of Lothal, cockily waving goodbye to the Noghri after he is left clinging to the rock wall as they speed away, not realising that Rukh has planted a tracking beacon on their bike.
Zeb arrives back at the camp, having failed to inform them he is in a stolen Imperial vehicle, causing Ryder to take a potshot at him, and Sabine begins installing the Hyperdrive on their U-Wing.
As she prepares to leave, Kanan and Hera spend a moment discussing the future, and Kanan laments that she hasn't considered their future, they are about to kiss, when they are interrupted. Hera grabs a kiss from Kanan, and tells him "May the Force be with you", before taking off in the U-Wing They spot Imperial tanks approaching, and Jai takes a speeder evacuating much of the base, leaving the Imperial Troop Transporter and the Speeder Bike, however the Troop Transporter takes a hit from the tanks, leaving the small group of Rebels stranded.
Ezra spots Loth wolves, and urges the group to follow them deeper into the maze of rocks surrounding the base, and Pryce upon realising this calls for air support.
In space, Hera and Chopper are attacked by Tie Fighters, and are hemmed in by Star Destroyers and construction spheres, but Hera takes the small vessel to Hyperspace straight through the landing deck of one of the construction spheres, escaping the trap around the planet.
The wolves lead the group into caves, and repeat the name "Dume", which Kanan tells Ezra is his true name, Kaleb Dume, and as Tie Bombers flatten the rocks above them, and the caves shake, the Wolves lead them through tunnels, which become like hyperspace transit tunnels, with their footsteps creating ripples among the streaking stars.
The group awakens to a Loth Cat licking Ezra's face, and they step outside of a cave only to discover they have crossed the entire planet, somehow. Returning into the cave, the notice paintings which tell of Jedi coming to Lothal. Kanan takes off his visor and touches the lead wolf, feeling it, and tells Ezra that the wolves are deeply connected to the Force, and specifically to Lothal.
He speculates the wolves are helping them because the Empire is doing something to Lothal far worse than building the Tie Defender, and that the paths are coming together, but they may not like where they lead.
Meanwhile, on Yavin IV, Hera lands the U-Wing, and passes the Tie Defender flight recorder to Mon Mothma, who is pleased to see it.

High Points : Now while there's a load of action throughout the episode, which I'll talk about further, but the best moments of this episode for me are the ones devoted to Kanan and Hera. They discuss their future together, with Hera being devoted to the Rebellion and not giving many thoughts to herself and her future, but the love between the two has always been apparent, and it comes to it's head in this episode with the others looking on with amused joy at the couple's first on screen kiss (given what we discover in the last moments of the series, I can only guess that they have had moments off camera together).
It's great to see them being tender towards each other, and it's an incredibly natural relationship to watch. Kanan and Hera have always been the mommy and daddy of the group, so them being together feels natural and unforced, they've always had each others backs, and been the two voices of sanity and wisdom throughout the series, so are completely suited in temperament.
But it's also heartbreaking to see these moments, as even without prior knowledge of what happens in future episodes, the knowledge that by the time of the original trilogy (now only a year or so away), Luke Skywalker will be last of the Jedi, which doesn't bode well for Kanan and Ezra.

Moving onto other elements of the episode the battle with Rukh is excellent, he's a nimble opponent, who uses his brains, planting the tracker early in the fight, so that no matter the outcome of it, he can still track them.

However, the action highlight of the episode is Hera's hyperspace jump through the construction station, fleeing the planet with the Tie Defender flight recorder aboard, and hemmed in by Tie Fighters and interdicting Star Destroyers, Hera sees her chance, and plots a hyperspace jump through the open hangar bay of an imperial construction sphere. The stars streak as she makes the transition to light speed straight through the station, with the energy from the jump burning the contents of the hangar as she jumps away. It's a dramatic and incredibly visually impressive moment, unlike anything we've ever seen before.
Hera is supposed to be one of the best pilots in the galaxy, and certainly proves it here. In my opinion, she's better than Han Solo (although she's modest, and he's believes his own PR), and her return to Yavin IV is a triumphant one.

Finally, the mysticism increases, with the Loth Wolves now appearing to others in the group, revealing that they can travel almost anywhere on Lothal, and that they are intrinsically linked to Lothal and protecting the planet. We've yet to see all of their story, but as we witness more and more of this story, it gets more interesting and gripping.

Low Points : My one real complaint about this episode is Rukh, who really doesn't seem that credible a threat. The design of the character, just as a stocky humanoid, with a rather loping run, doesn't make him threatening.
I remember seeing in a previous episode, Thrawn's carvings of the Ysalamiri in his office, and originally speculating that they were Noghri hiding in plain sight. Even though I was wrong, the design of the Ysalamiri is a better one that the Noghri, and a snakelike lizard movement I think would have created a far more interesting opponent than Rukh, who is just a human with some modifications, not even appearing as alien as Zeb.
As a final note on this subject, I'm probably being biased in thinking of the Gila Munjas from Judge Dredd, ninja lizard people with natural chameleonic abilities.

So what do you really think ? : This is an amazing episode, having really poignant character moments with Kanan and Hera, and Kanan and Ezra, and some great action including one of the absolute highlights of the entire series, I've only marked this episode lower than the last because the character moments may not be to everyone's taste, and may makes some consider the episode a little slow.

Final Words : Knowing what happens in the near future, the kiss between Kanan and Hera is especially sad, I so want to see these characters together, they're fighting for their own future together as much as they're fighting for the galaxy, but the tragedy is palpable and we just know that this isn't going to end for them well.