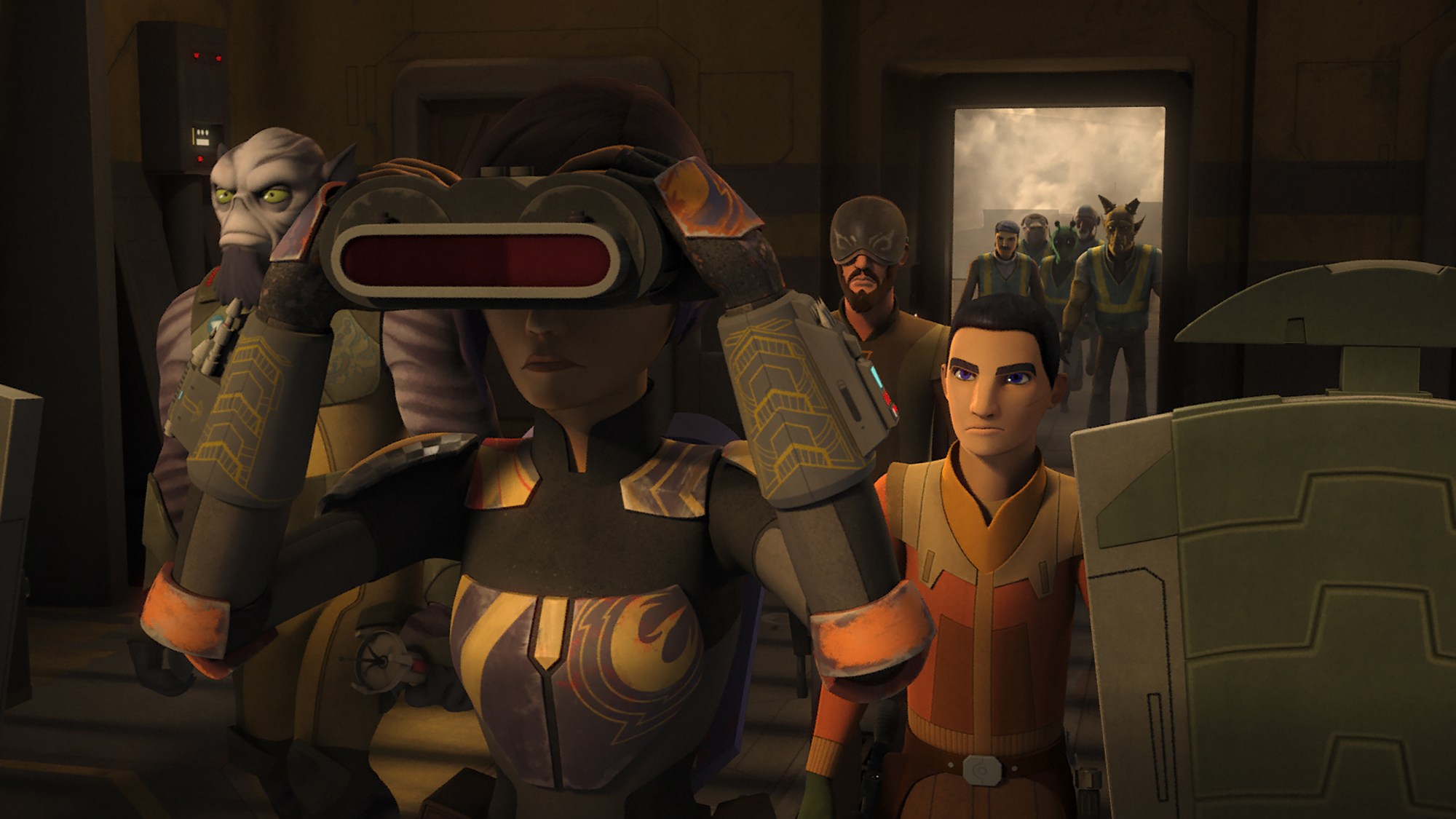 What is it ? : The group, minus Hera and Chopper who are on Yavin, are setting up base in the caves that the Loth Wolves transported them too. Sabine is working on setting up communications with Yavin, but the communications system they have is not powerful enough to punch through the jamming that the Empire has in place, but she picks up something else close to them, and the group sets out to check it out.
They discover an Ore Crawler strip mining the surface of the planet, Ezra comments he saw them in the northern hemisphere and is worried about them getting this far already.
Recognising that the crawler is likely to have a transmitter powerful enough for them to break through the jamming and speak to Hera on Yavin, Sabine boards it using her jetpack and disables a security droid, allowing the rest of the team to board from Ryders Speeder.
Meanwhile on Yavin, Hera is trying to convince the Rebel command that launching a raid on Lothal is important, they fear the defeat that Thrawn served them at Atollon, and worry about throwing their forces away in a futile attack. Hera convinces them that not stopping the Tie Defender is worse, and that the chance of a victory is better than nothing.
On board the crawler, the group captures the commander, a small Trandoshan, and Kanan and Zeb set off to round up the rest of the crew, but find most of them are prisoners forced to work here, including Citrago Vizago.
The prisoners are guarded by a Trandoshan foreman, a much larger individual than the captain, who uses a laser whip, and ends up fighting Zeb in a prolonged brawl leading outside of the crawler, with both opponents hanging from the superstructure as they bash it out, but the foreman loses his grip eventually and tumbles to his death, as the prisoners cheer their hero Zeb.
The disruption aboard the crawler has notified the Empire that something is wrong, and the group uses Vizago to pretend to be the captain, and that they are suffering mechanical faults, but they send a patrol to check it out.
The Stormtroopers arrive and search the crawler, but with the help of the prisoners, Vizago masquerading and the captain, and Zeb masquerading as the foreman, they fool them into leaving. But are surprised that the captain never caused any disruption, as he had been a constant annoyance since captured.
Checking on him, they discover he has escaped, and he signals that they should abandon the crawler, or he will sabotage it. Ezra is forced back into his old role as the small one who could sneak into air cuts to chase the captain, but is ambushed, but the captain slips on Ezra's lightsaber and falls into one of the smelters.
The group tells the prisoners they are free, and they decide to help the Rebellion, and Vizago takes command of the Crawler. Sabine gets a signal through to Hera, and finds out the Rebels on Yavin are preparing their fighters for the strike on Lothal.

High Points : The highlight of the episode is the fight between Zeb and the Trandoshan foreman, both are much larger than humans, and it comes across as a heavyweight battle, which ends with the two hanging from the crawler and still slugging it out. It's great to see Zeb get his moment of being a hero, as he's often forgotten about. This is definitely his moment, as the freed prisoners look at him as their hero rather than the two Jedi, after all it's him that bested their jailer.

It's also great to see Vizago back, we find out what happened to him after he helped smuggle them onto Lothal, and he has grown as a character. His admission that he knows they didn't come to rescue him, but he thanks them anyway, is a great one. How much has the series shown everyone coming together to fight the empire, even Vizago who was an antagonist of the heroes in the first episodes, now joining the Rebellion.

Low Points : This episode is a bit of a filler, an entire episode about getting a radio to find out that Hera is leading the attack on Lothal. We could easily have just received the communication at the start of the episode, and gone straight to the attack. In fact the only real value of this episode is seeing Vizago's journey to joining the Rebellion.

So what do you really think ? : The episode is done well, but there's not a load of substance here, and if I wasn't just trying to get all the Rebels I can at this point, I'd find this a very skippable episode. I suppose we see the ongoing despoiling of Lothal, which presses the urgent need of fighting the Empire, but there's not a whole load going on here.

Final Words : Well, finally we get the attack on Lothal, which was put on hold after the loss of Atollon and Chopper base. But lets be honest, we know this can't go well, we know from the starting scroll of a New Hope that Scariff is the Rebellions first victory, which doesn't bode well for this attack at all.
Oh well, we'll find out next episode.