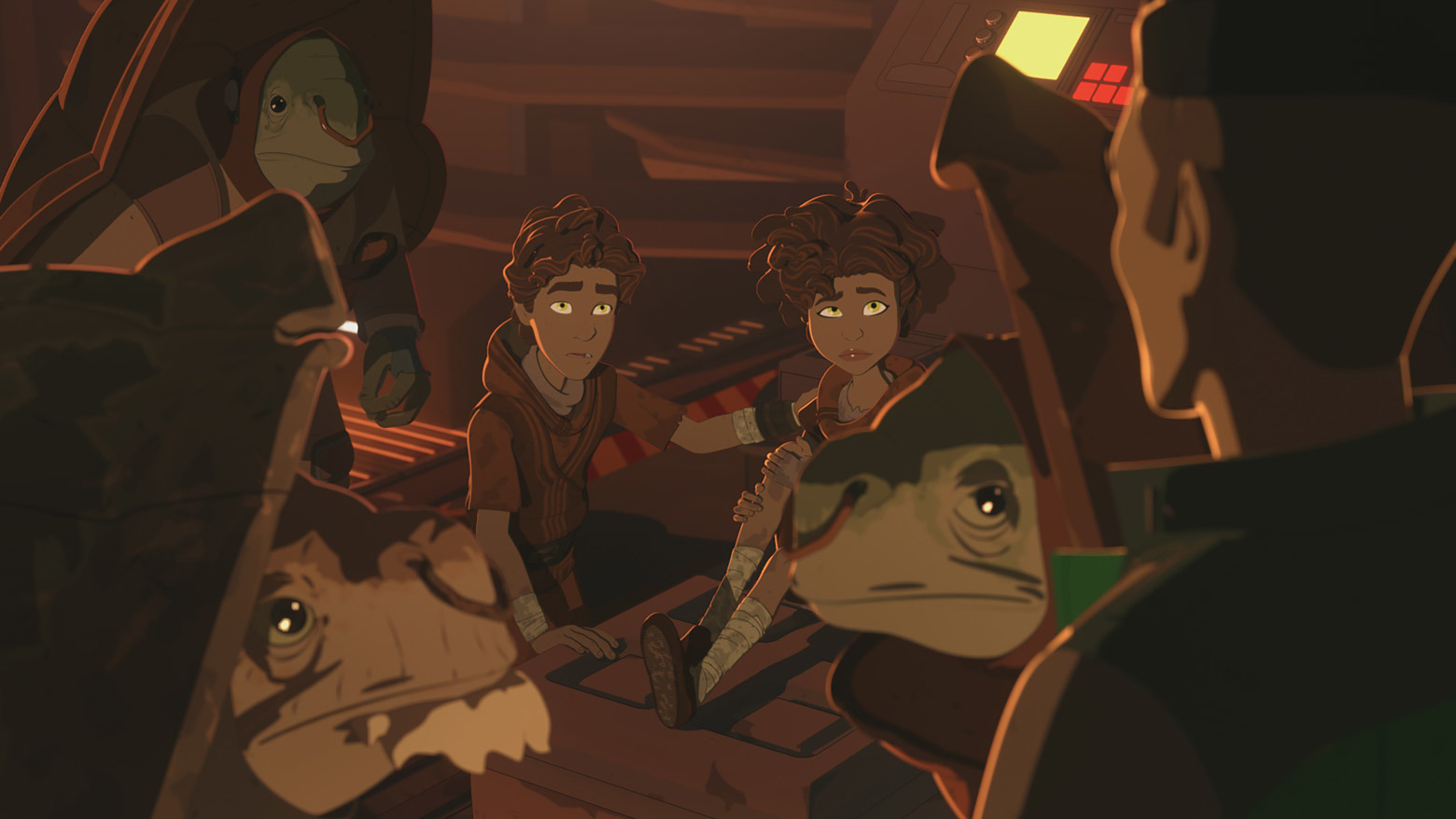 What is it ? : Kaz wants to help Tam and Neeku repair an engine to be helpful, but Tam insults him and doesn't want him to help, however there are three things to be done so she allows him to help, but he adjusts the wrong part and breaks the whole unit.
He offers to pay for it but doesn't have any money, going to the bar he orders water, but only has enough money for a sip, but Neeku pays. While they are there, they see a bounty being offered for two children, and Kaz thinks this might be the answer to his problems. Heading out into the market they spot the two kids, who have been stealing to support themselves, chasing but losing the kids, the pair are summoned to see the commander of the station.
He questions them on the two kids, and Kaz tells him that he spotted them in the market, but knows nothing else. He then communicates with the First Order, letting them know the kids have been seen on the station, but wants to know why they are being sought.
Captain Phasma tells him that they are part of the ruling houses of the First Order, and their family is concerned about them, and she will be sending troops to search for them.
Kaz and Neeku continue to search for the kids, and Neeku introduces Kaz to the Chelidae, amphibious inhabitants of Castilon, who do most of the maintenance work on the station, so know almost everything which is going on.
The find the kids, who reveal they are survivors of Tehar, a world slaughtered by Kylo Ren and the First Order, and are the only witnesses to the slaughter, so the First Order is trying to silence them.
The First Order troops, commanded by a gold plated Stormtrooper names Pyre, find the kids, but are fooled into thinking they have fallen and drowned in the sea.
Kaz gets the kids hidden by the Chelidae, and reports the First Order activity and information on Kylo Ren to Resistance command, where Poe Dameron isn't available, but another officer, Ello Asty, tells him that he is doing good work and the Resistance recognises him as a valuable agent.
Afterwards the Chelidae present him with the part that he broke at the start of the episode, that they have repaired, and he takes it to Tam, who expresses a grudging respect for him.

High Points : Well, we continue to discover more about the First Order, even if that information doesn't make much sense. They're going around massacring planetary populations who don't bow down to them, and cover the massacres up as to not draw the attention of The New Republic. But the idea that absolutely no information can get out is totally ridiculous.
And Kaz is actually recognised by the Resistance for doing good work, even if his co-workers continue to belittle and insult him.

Low Points : So, Kaz is poor, and only has enough money for a sip of water. Firstly, what's he spending money on, or is Yeager really paying him so badly that he can't afford to drink water, when they're on a water world? It seems to me, that even if the ocean around the station is salty, then filtering it should still be fairly cheap, and that in a galaxy where galactic travel is commonplace, that water on any planet except a desert one, should be pretty darn cheap.

I'm also bothered by the convenience of the story, Kaz just happens to see a galaxy wide bounty being offered for the kids, who could be anywhere in the galaxy. Out of how many bounties are put out across the galaxy? Thousands, tens of thousands each day? And also, they just happen to be on the station? There's no evidence that the First Order knew they might have gone to Castilon, it's all just crazy, random happenstance.

So what do you really think ? : Another poor episode of Resistance.

At least it seems to be coming together now, and although we start the episode with another story of the work experience boy in a repair shop, we end up with a story of the Resistance trying to work out what the First Order is up to across the galaxy.

Final Words : There's nothing much to add about this, watching these episodes are leeching out my enthusiasm for reviewing this entire series. I feel as if I've started, so I might as well finish, but it's really becoming a slog already.