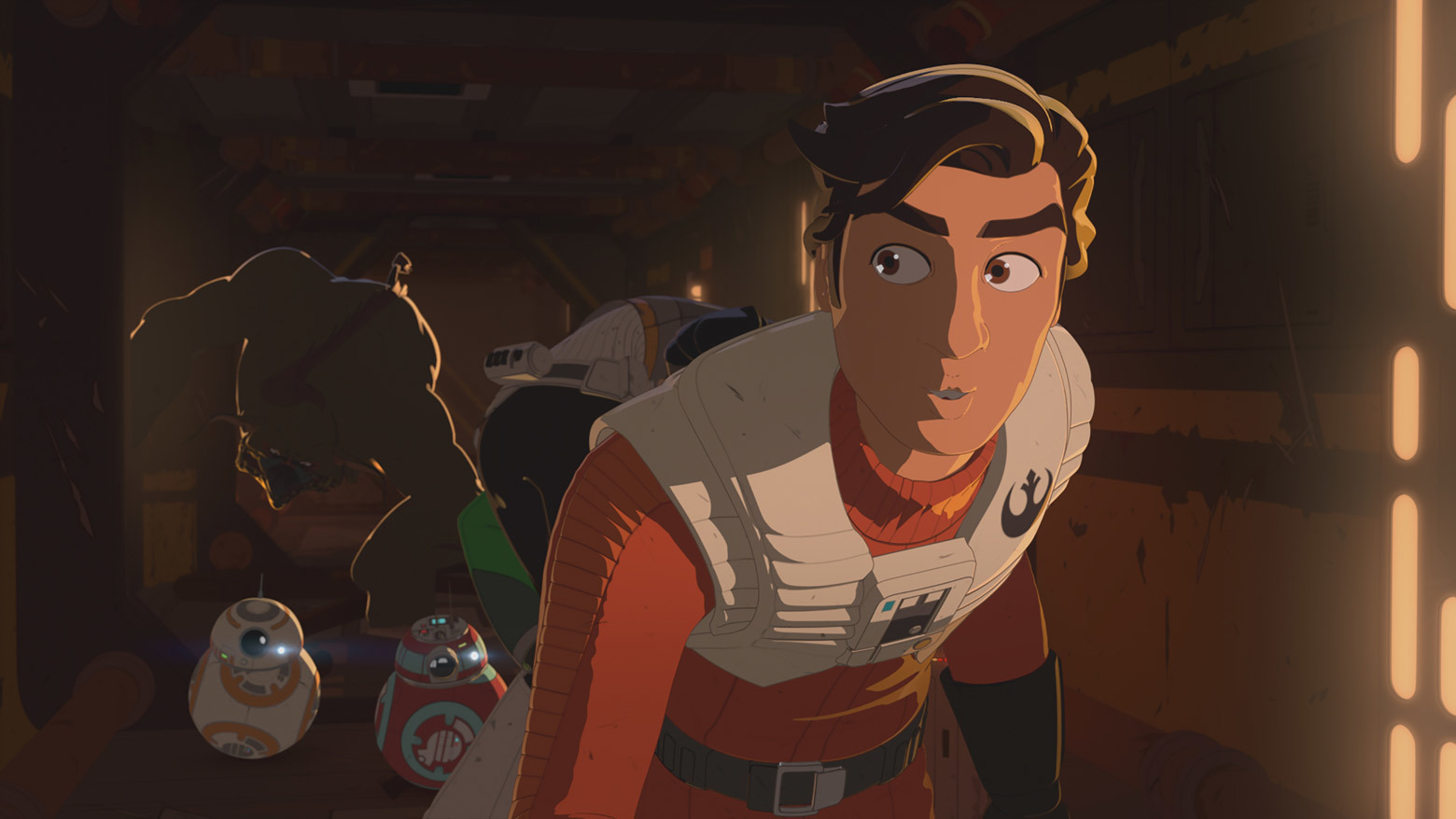 What is it ? : Yeager awakens Kaz from his sleep, and after he proves himself incapable of getting himself a coffee, they board a shuttle and take it to a rendezvous high in the planets atmosphere. Poe Dameron arrives in his X-Wing, with a spare which Kaz jumps aboard as the ships are in flight.
They head out into space and discuss Kaz's mission, Poe is happy with the way it's turning out, although Kaz complains that he's not a spy, but a pilot. They practice some maneuvers through an asteroid field, before picking up a distress signal. They discover a transport which has been boarded by Pirates, and detect life signs aboard, so dock to rescue any survivors.
Once aboard they are ambushed by Kowakian Monkey Lizards, eventually discovering a giant one which chases them through the ship. They find an unconscious woman in a packing crate which they assume to be a survivor of the pirate attack, and they rush her back to their ships and depart. They are ambushed by Pirate fighters, but defeat them using the moves they learnt earlier in the episode.
Rendezvousing with Yeager once again, Poe leaves, and once the woman confirms their story, Kaz decides to take her back to Colossus station where she can get medical aid.
Once aboard the station she abandons Kaz, taking out a communicator and revealing she was one of the pirates, and is now going to take advantage of having slipped onto the station.

High Points : Well, Poe is back and being one of the more positive characters in the series he's far more interesting to watch than all the characters who are constantly rude to each other (which I think is why Neeku is the best character in the show, but he's totally absent from this episode). And we get some space action, which is always my favourite part of Star Wars, which looks and sounds great, with the X-Wings soaring past the camera multiple times in a very cinematic fashion.

I was actually going to write this one up as a negative, but I'll give it to them as a positive, the main opponent in this episode are Kowakian Monkey Lizards. Yes the small annoying creature from Jabba's palace. But they've done a fairly good job of turning these into a credible menace, they're small and annoying, but in numbers they grab equipment, pounce on peoples faces and provide quite a good threat. Not sure what to think about the giant one though, perhaps a Kowakian Gorilla Lizard?

Low Points : The series continues it's theme of Kaz being totally incompetent, for a while I thought we were going to get him back in his element, since he is actually a decorated starfighter pilot, but we only get this for the briefest of moments, then the normal Kaz is back, screaming, bumping into things and being generally useless. Not only don't the other characters in the series treat Kaz as incompetent, but the writers do too.
The characters are in the situation that they're boarding a ship which has been taken over by Pirates, and Kaz doesn't even get trusted with a blaster.

The episode features one of the most obvious cases of Chekhov's gun that I've ever witnessed, with Poe teaching Kaz a maneuver in his fighter near the beginning of the episode, which of course proves vital later on. Given that Kaz has received awards for his piloting, it would have been nice for him just to be good at it, rather than requiring teaching from Poe.

At the end of the episode, the woman that they rescued turns out to be one of the Pirates, and it seems as if they've got one over on the heroes by getting her onto Colossus station. But that doesn't seem a very hard thing to do, the people on the station don't appear to have passed any high security checks. The people appear to be totally ordinary, with various shop keepers and aliens very much like Mos Eisley or any market place we've seen around the galaxy. Even just last episode a couple of kids managed to sneak onto the station without anyone recognising them. But suddenly, now, getting onto the station is some kind of masterful tactical advantage they've handed to the pirates by rescuing one of them.

So what do you really think ? : It's got some moderately interesting set pieces, being chased through the ship is reminiscent of the ractar scenes in The Force Awakens, and the space scenes do look and sound great.
But there's not much story here, and what is there doesn't make too much sense.

Final Words : With my reviews of Rebels drawing towards the end, soon only Resistance will remain in my watching schedule. And that makes me sad. The series really isn't getting much better, although I suppose the first season of Clone Wars was pretty poor. But even that had moments of brilliance, which Resistance just isn't showing.