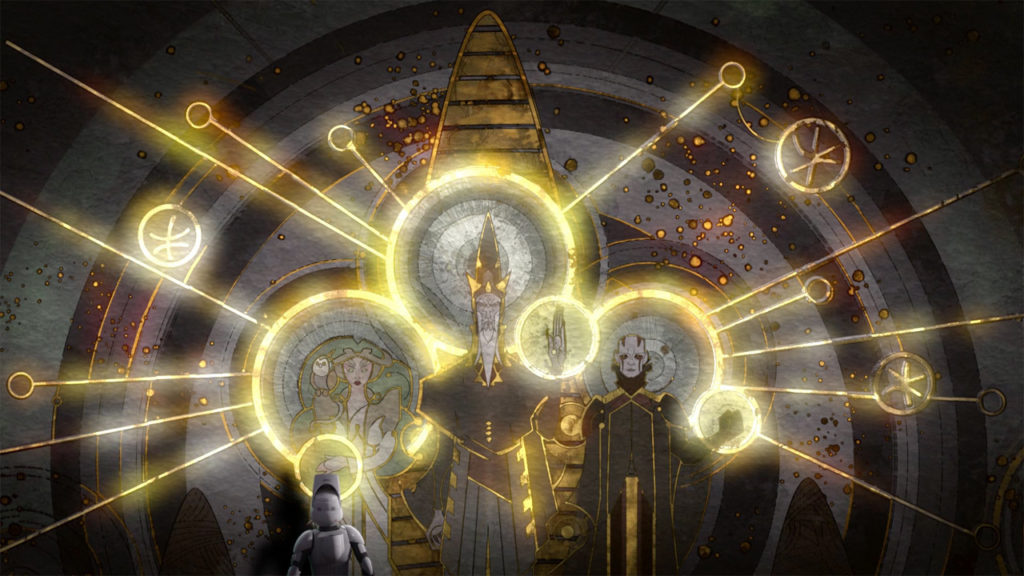 What is it ? : Continuing straight from the last episode, Ezra speaks to the team and explains that the Loth Wolves have spoken to him, warning that the Empire is interfering with the Jedi Temple on Lothal and that it is a greater threat than the Tie Defender factory. Hera trusts him, but says that the temple is in the other hemisphere of the planet and they have no way of getting there quickly, Ezra resolves to solve that problem.
Outside the camp, Ezra summons the Loth Wolves, and the group climbs onto them, and the wolves set out across the plains of Lothal, sinking into the ground as they run and entering hyperspace to make the journey almost instantly. The team awakens and it is evening, and they must make the rest of the journey on foot, discovering the Jedi Temple is now a deep pit and quarry where most of it has been taken away.
Ezra and Sabine ambush a couple of Scout Troopers, stealing their uniforms and entering the Imperial encampment, and they listen into a communication between Minister Hydan and the Emperor, and that the Emperor is sure the temple contains great power to be a conduit between the living and the dead.
They encounter a painting on the wall of the remains of the temple, which shows the Father, Son and Daughter of Mortis, and they decode the stone tablet the Loth Wolf gave Ezra in the last episode to indicate the hands of the three figures.
Sabine distracts some guards, but is caught out by Minister Hydan who realises there are infiltrators in the camp, as Ezra activates the painting which animates, and he follows the Loth Wolves as the paintings run across the rock walls, forming a ring.
As Stormtroopers locate and surround Ezra, he leaps into the ring disappearing into the rock, which is just rock as Stormtroopers attempt to pursue him and crash into the solid surface.

High Points : First of all, I must complement the music, throughout Rebels it has been absolutely excellent, the themes always sound familiar enough to be perfectly Star Wars, but are unique enough that they're not just reusing soundtrack elements from the movies. But I must draw out special attention to the music during the sequence when they are riding the Loth Wolves, it's so tribal and absolutely perfect signalling the nature of the Loth Wolves and providing a native feeling to the sequence, but without being so jarringly different to Star Wars that we're bounced out of the moment.
In fact the entire sequence with the Loth Wolves, as the rebels travel with them and hear voices from the past and future, seeing visions of Kanan and themselves from different times, it really brings the mystical element of the series to the forefront, and it isn't something Star Wars has really done before. Although the Force is always a key element of the Star Wars Mythos, we've never had it be quite so mystical as Rebels now portrays it, the will of the force acting through the Loth Wolves to protect Lothal and the Jedi Temple, it feels so much more epic than Star Wars usually does, that their actions are actually important in the grand scheme of things, and that they are dealing with not only super weapons and powerful force users, but with something far older and far greater than them.

It's also really nice to see the force users of Mortis being brought back into the mythos, with them forming an important element of the story and connecting what Ezra and the team are doing with Ahsoka, Obi-Wan and Anakin's adventure on Mortis during the Clone Wars series.

Low Points : Although this episode feels so important, with mythology and callbacks to the older series, in actuality nothing too much happens during this episode, action wise, Zeb beats up two Scout Troopers, and Ezra and Sabine sneak around an Imperial camp. So if you're looking for action, this episode isn't for you.

So what do you really think ? : I really enjoyed this episode, it has a feeling of weight, of importance, that we're finally beginning to see how important Lothal is, we're finally seeing the importance of Mortis and the beings there, and we're getting a glimpse into the Force.

Final Words : Only a very few episodes to go, and so much to happen, I really had to fight off watching the next episode, as this really feels like it should be an epic Star Wars movie, rather than just episodes of a series.