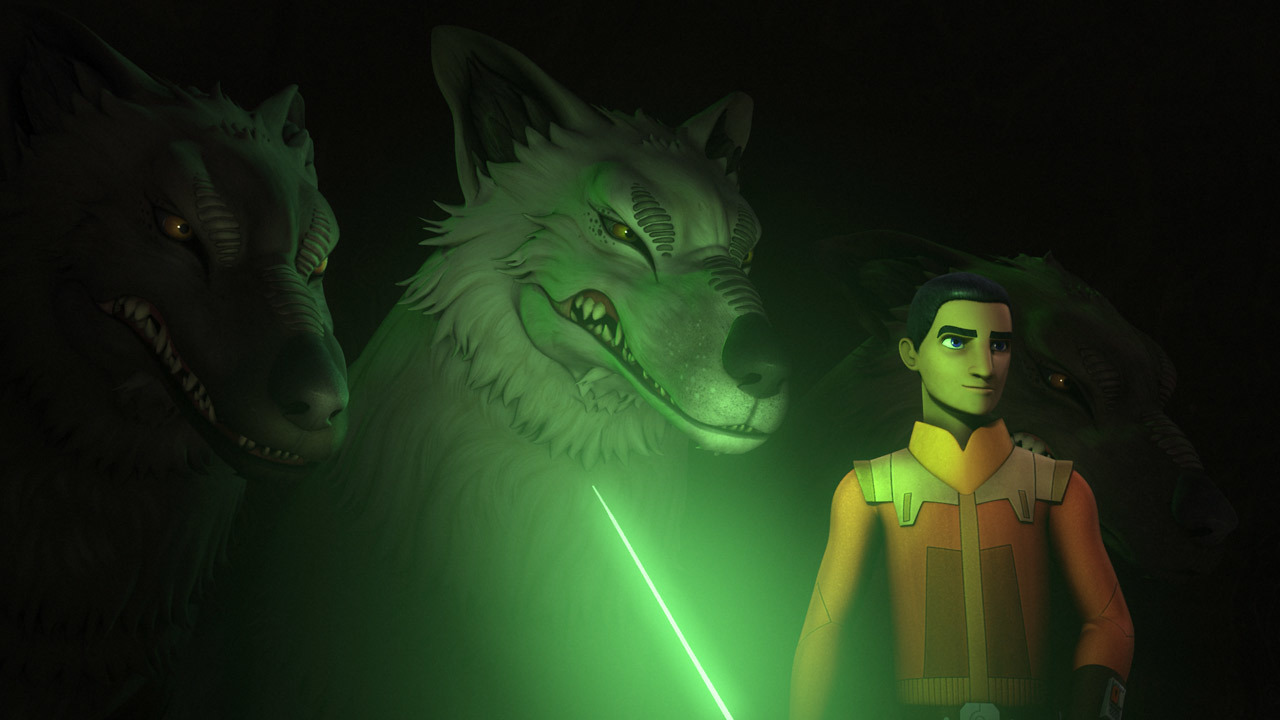 What is it ? : The Ghost arrives at Joopa Base on Seelos, the converted AT-AT used by the Clone Troopers after their AT-TE was lost at the beginning of season 2. Hera is here to collect the Clones, and Hondo Ohnaka to take them to Lothal for the final battle to liberate the world. The clones comment that there's no briefing from Rebel Command, but here tells them they're not working for Rebel Command, this is for Ezra, to free his homeworld.
The Clones comment that they have followed Jedi into battle before, and that the boy stands for a time when there was something to believe in. Hondo agrees, and says there is nothing he would not do for the boy.
Back on Lothal, Sabine finds Ezra meditating in the same place Kanan did outside the cliff side base, and he tells her something has changed and he needs to speak to Hera. Returning to the base, Citrago Vizago tells them that they've got Hera on the hologram, and Ezra tells them they must attack not. Ryder Asadi points out that the group has already tried this, and failed and that they would need an army to win. And Ezra tells him they don't need an army, they just need one person.
In the Imperial Dome, an officer is telling Governor Pryce that they haven't located the Rebels yet, just some abandoned encampments. She rages at him, saying that they must have the young Jedi as a prisoner by the time that Thrawn returns, that he will punish her for her failures if he is not, and that she will make sure the officer is punished first, and he rushes off to double his efforts. Another officer enters, telling her that they have a communication coming in, and she receives it, to find it is Ryder Asadi. He offers the location of Ezra and the Rebels, saying that they don't have a chance, and that he doesn't want to return to prison.
Ezra and Sabine watch the Loth Wolves high on the cliff faces, and discuss Ezra's connection to them, but the wolves depart, and they hear the sound of Imperial Patrol Transports arriving and deploying Imperial Jump troopers. Battle breaks out, and with Sabine taking to the air to combat the Jump troopers, Ezra finds himself in battle with Rukh.
In space the Ghost emerges from Hyperspace but cannot approach the planet because of the blockade, but Hondo tells them that they should wait at the Hyperspace emergence zone, and will be able to use an Imperial transport for cover. When the others are concerned over the danger, Hondo brushes it aside, telling them that he has only collided with transports a number of times, but the trick has always worked.
The battle turns on the Rebels, and Ezra and Zeb are forced to drop their weapons when they discover their comrades captured and at gunpoint. Governor Pryce gloats over her victory, informing them of Ryders treachery, but Ezra tells her that they knew she would fall for Ryders ruse, and the plan was to get her here, she tells him they both gambled, but he lost.
In orbit a massive Imperial transport arrives, and the Ghost, all systems powered down, latches onto it and is carried past the Imperial blockade.
Ezra receives the signal from Hera, and keeps Pryce talking, as the Ghost swoops down and attacks the Imperial Patrol Transports, dropping off the Clones to join the fight. Hera continues to attack the transports, with Hondo and Melch manning the guns, but the battle is still heavily weighted towards the imperials due to strength of numbers. Ezra is chased into the caves, by Rukh, but is soon caught, and Rukh asks Ezra where his army is.
In the darkness behind Ezra the eyes of the Loth Wolves appear, and Rukh realises he is massively outnumbered by the massive beasts. The Loth Wolves join the battle, and make short work of the Stormtroopers, and Gregor laughs telling Wolffe that he's got his Wolf pack back, to which Wolffe comments that they fight as fiercely as his boys did.
A wolf catches Pryce, and carries her in it's mouth back to the Rebels, where Ryder cuffs her, with Hera complementing him on his victory, but Ezra tells her it isn't over until the Empire is driven from Lothal.

High Points : And everything starts coming together for the finale, we've got returning characters from throughout the series, with Gregor, Wolffe, Hondo, Melch and Ketsu Onyo all returning on the Ghost to Lothal, and Citrago Vizago, Ryder Asadi, Mart Marin, and Jai Kell already in the team. This really makes everything the heroes have done throughout feel part of the same storyline, from saving Iron Squadron, recruiting the Clones, to missions into the Imperial Academy, they all helped build their forces for this final battle.

The betrayal of Ryder feels plausible, so actually manages to make you consider that it might be real for a while, and Ezra pointing out that Thrawn wouldn't have fallen for it makes for an excellent moment.

The battle at the cliffside Rebel encampment dominates most of this episode, and it's brilliantly done, with the battle switching from side to side a few times, and Ezra's plan coming to fruition superbly.

Low Points : My one sticking point with this episode, is Rebel commands refusal to help. While they've already lost some fighters in the attack on Lothal, really they only committed a squadron to the liberation of an entire world. And now their refusal to help seems to be more about keeping the series pure than any real developed plot points,
We're aware that the Battle of Scariff is listed by both Rogue One and the opening text of A New Hope as the first victory of the Rebel Alliance. So to keep this true, the writers have decided that this must be Ezra and his peoples victory, rather than one for the Rebel Alliance. However, since the series is called Rebels, whether it's Ezra and his teams victory, or one aided by the larger Rebellion, it's still a victory for the Rebels.
As for the in series reasoning of the Rebel leaders to not get involved in the liberation of Lothal, all we see time after time from the Rebel leadership is an unwillingness to fight. We've seen it a couple of times in Rebels, and of course it's a major driving force in the plot of Rogue One. But why have they accumulated all these capital ships and starfighters if they're not willing to fight.
It feels badly handled, and is perhaps a result of the series coming to an end after only 4 seasons, with the writers having originally planned a longer and more detailed reason for the Rebel Alliance's unwillingness to take part.

So what do you really think ? : Another absolutely brilliant episode, with loads of action throughout. It doesn't feel as epic as many of the episodes around it, but it does feel like a sensible coming together of plot threads which have been building towards this throughout the entirety of Rebels. The forces and friends they've been gathering since season one are now all coming together (except those with ties into the movie series) to join the heroes in their final push.

Final Words : Well, just the two part finale to go.
And then Rebels is over.
While I'm really looking forward to watching the finale, it's going to be a bittersweet moment, and I'm really going to miss this series, and spending time with these characters.