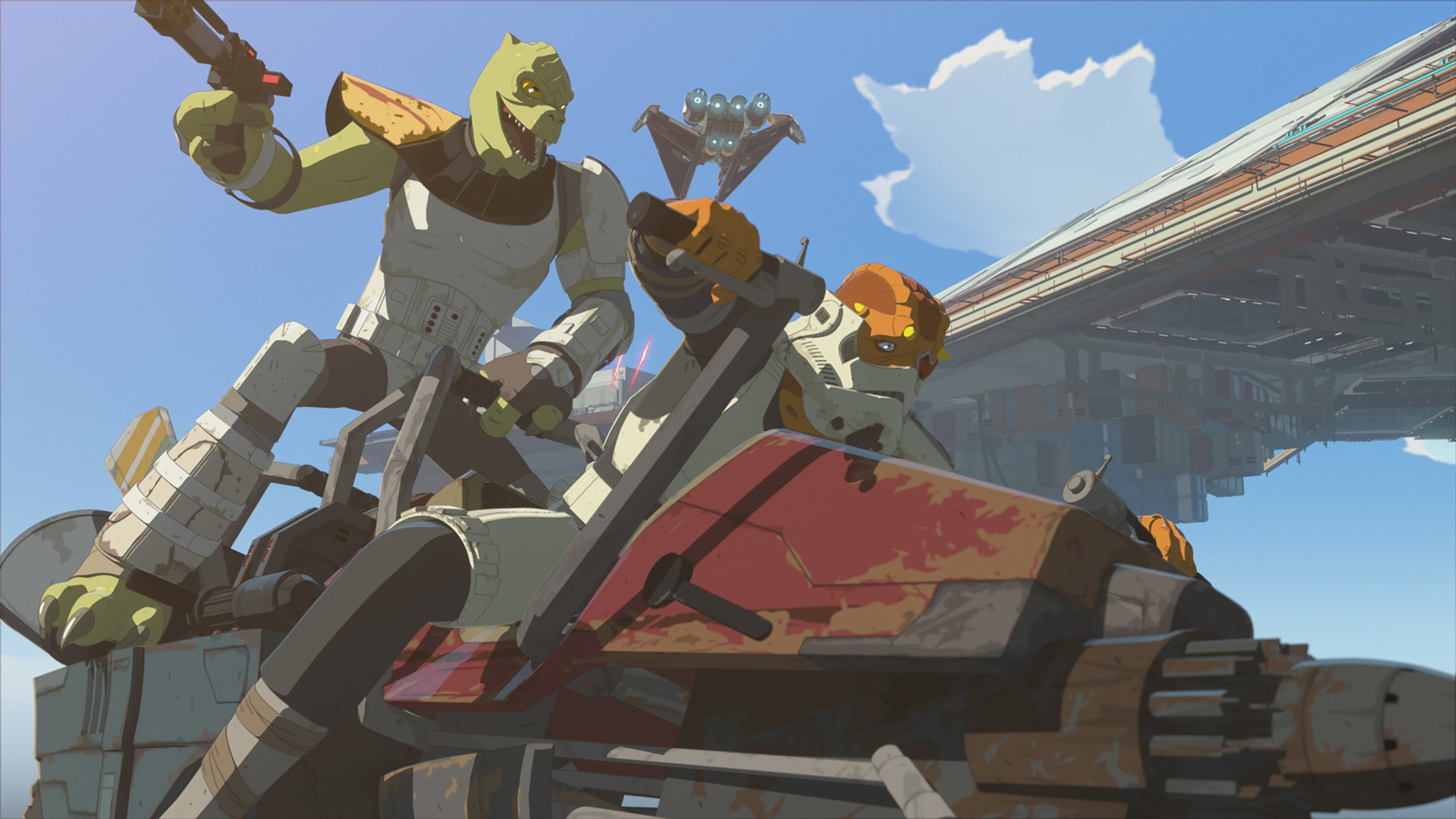 What is it ? : Tam and Kaz are working on a unit, and Yeager urges them to hurry up, the system is the targeting unit for the defence turrets on Colossus station, he speaks to the base commander, who warns that without the system the base will be defenceless soon since the Ace's must leave to escort a transport vessel.
They need a specialist part, and Yeager tells them to go get it, and tells Neeku to keep quiet about it. They head down to the Office of Acquisitions, where they are mocked for expecting such a specialised part to be available. Kaz comes up with the idea of asking Synara, the girl he rescued last episode, since she now works with the salvagers on the station.
Synara helps them get the part they need, but is suspicious about why they need it, and climbs up onto the top of the station and notices that the defence turrets are inactive. She takes out a communicator and tells her fellow pirates the situation, and while she watches the Ace's fly over head as they leave the base on their escort mission, so the pirates decide to attack.
As the klaxons blare, Kaz and Tam finish their work, and they see the salvagers area of the base under attack, so Tam rushes off to help Synara, since she helped them. Kaz and Yeager lift the targeting computer with a repulsorlift craft.
As pirates raid the station, robbing the market and making off with supplies from across the station, Tam arrives at Synara, and the two of them take out one of the Pirates, with Synara seemingly helping Tam, but this is in an attempt to keep her cover alive.
Kaz and Yeager battle with pirates as they move the computer to where it connects to the station, and after dropping it off, Yeager ends up fighting the leader of the Pirates. Kaz notices the computer is not correctly seated to connect, and levers it into position, but the careening repulsorlift speeder knocks it into position, activating the defences and chasing the pirates off.
After the battle, Synara seems moved by the fact that Tam would put her life in danger to help her, but Tam tells her that's what friends do.
Looking out over the smoke rising from the damaged station, the station commander contacts Commander Pyre of the First Order to ask him for details of the deal for First Order protection.

High Points : Well, I have to say this is the best episode of Resistance so far, and that may be because instead of dwelling on the usual story elements, it's almost non stop action.
It also gets around one of my major complaints about Resistance, the treatment of of Kaz. Usually he's treated like an idiot, but from the start of this episode he's competently helping Tam work on the defence computer. Although unarmed, he fights pirates, but is outmatched by the armed and armoured opponents. The hero actually acts like a hero, rather than as a clown, which is the role the series usually pushes him into.
And it really works, with loads of action, and a heroic main character, Resistance is actually acceptable for a change.

Also, my past criticisms of the series may be a little misplaced, as I'm finally actually starting to understand how poor the station is. In past episodes I've criticised the fact that Kaz is so poor that he can't afford water on a water world, and that he's unarmed. But it appears that Colossus station actually is that poor, where pirates plan to attack, just to rob a marketplace, where having a blaster would be riches. I can only imagine that the water is toxic, which is why food and water is incredibly scarce here.
I'm a little concerned that my conclusions based on this episode are wrong, and that my past criticisms are valid, but lines of dialogue about a Y-Wing being riches for the salvagers, when such a vessel was mocked for being out of date during Rebels, which is set decades earlier, made me think about how poor a place would need to be for that to be considered valuable salvage.
Salvagers on Jakku have state of the art (at the time) military vessels such as Tie Fighters and Star Destroyers to salvage, but on Castilon, they've only got old junk to salvage from, earning a living from just scrap.

Low Points : The comedy aspects of Resistance still seem horribly out of place, for example, during this episode they are trying to get a targeting computer into place, and when it's not quite locked into position properly, they smash a speeder into it to get it to work. Now I'm a computer tech myself, and giving something a whack to try to knock something into place is pretty common, but an actual crash isn't how you handle valuable (to them) and delicate computer hardware.

I've pointed out that Kaz doesn't seem to be trusted with a gun, but in this episode I noticed that only the bad guys use guns. Tam and Synara disarm one of the pirates, and Tam doesn't even try to grab his dropped weapon, Synara (the undercover pirate) does. Now I'm old enough to remember that cartoons used to have problems showing heroes killing people. But Rebels and Clone Wars never shrank from the fact that this is Star Wars, and therefore combat, and people holding weapons and using them will be of major importance to the plot.

So what do you really think ? : I found this episode actually pretty watchable, most of my criticisms from past episodes seem to have been dealt with. Kaz is being heroic, we're moving forwards with the plot of the series, and things actually happen during the episode. I'll have to wait until next week to see if this is just a blip caused by a different writer or director, but hopefully they're recognising the flaws in their series and making efforts to correct them.

Final Words : After so much faltering around, settling Kaz into his role on the station, it's great to see some progress actually being made in the plot. I'm interested to see if this carries on as we're not even half way through the first season yet.