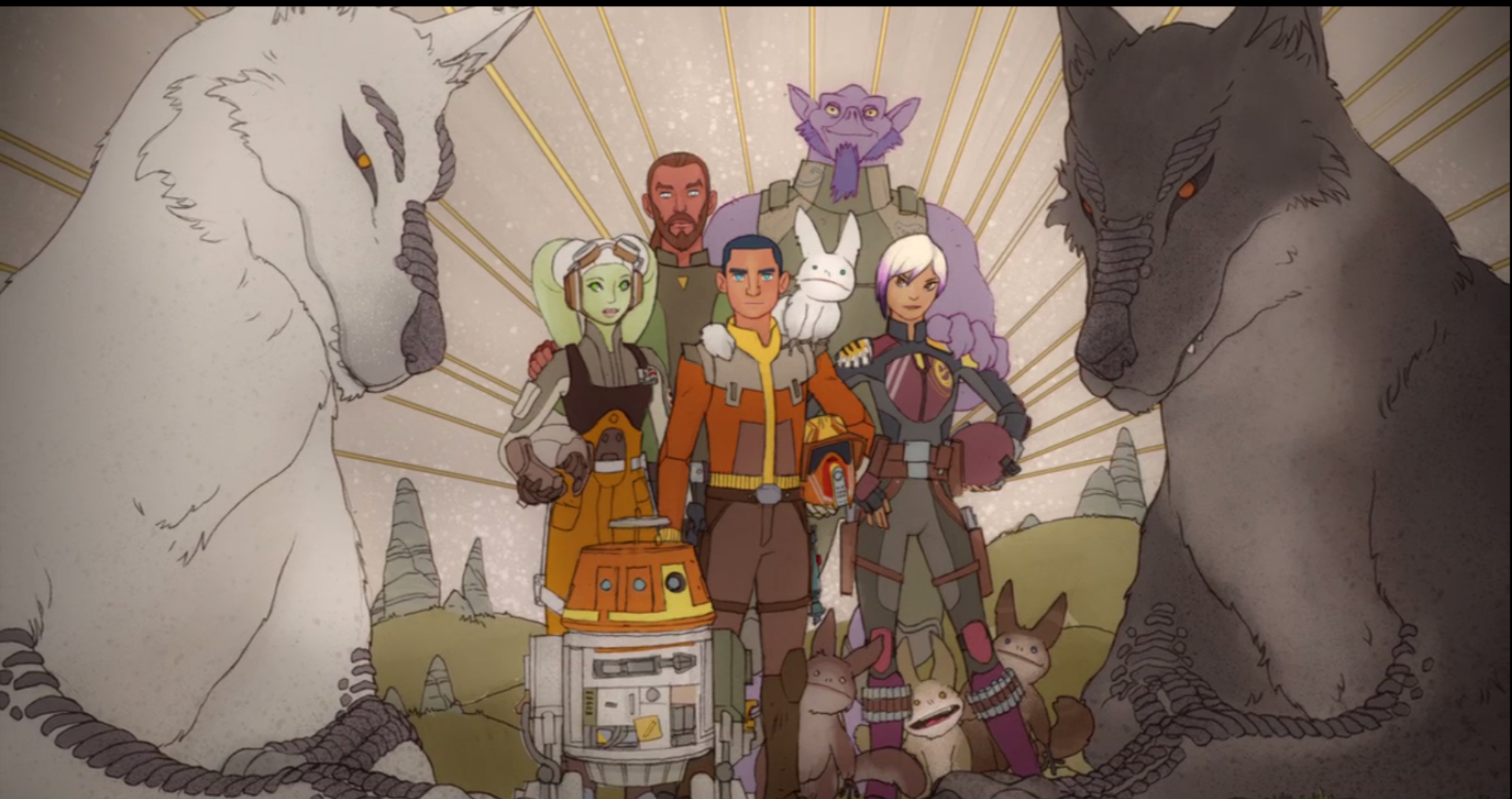 "The attack we all anticipated never came. The once invincible Empire had begun to fracture. The small Rebellion had become bold. And with the decisive victory at the Battle of Endor, the Emperor's reign of terror came to an end."

We see Zeb and Kallus on board a Nebulon-B frigate, where they are met by Gron and Chava.

"After the war, Zeb took Kallus along the secret hyperspace path to the planet Lira San. It was then Kallus realized he hadn't destroyed the Lasat people, and that they were thriving on this new world. A world where he was welcomed as one of them."

We see Hera flying the Ghost high above a planet, a small green haired human looking child is seated in the co-pilots seat, being entertained by Chopper.

"Hera fought in the battle of Endor, as did Commander Rex. By that time, there had been a new member added to the crew of the Ghost. Spectre-seven, Jacen Syndulla. Born to fly, just like his mother. And well, we all know what his father was like."

We see Sabine on a speeder bike flying into the city, Loth Wolves running alongside her, being watched by a Loth Cat. In the city she stands in a tower, a large mural of Kanan, Ezra, Sabine, Zeb, Hera and Chopper standing together, surrounded by Loth Cats and Loth Wolves dominates the room opposite the entrance.

"As for me, I used to think that Ezra was counting on me to protect Lothal, the planet and the people he cared for so much. But one day, I realized there was more to it. There was something else I was meant to do. Ezra's out there somewhere, and it's time to bring him home."

Sabine turns from the mural, towards the doorway where an older Ahsoka Tano stands, wearing robes and holding a staff, silently the two leave as the show fades to black with the Star Wars theme rousingly playing over the end credits.

High Points : Well, where can I start, this finale brings everything together, from the Emperor making one last attempt to gain access to the World between Worlds, to Ezra's link with animals from the Loth Wolves to the Purgil, which has been a plot point they've been building on since the very first season. We get a reason why Ezra isn't a Jedi during the Galactic Civil War, why Lothal is liberated, but it's not a victory for the Rebellion, and where Thrawn is during the events of the movies.
The episode brings back almost everyone the Rebels encountered to help in this final battle and takes almost every plot point from throughout, and ties them all up into a fairly neat final resolution.

We also get a number of absolutely great moments, from the Emperors disguise as his old self, to the death of Gregor, and even a couple of good Hondo lines (who would have thought he'd turn out to be a hero). Even Governor Pryce gets to go out in a blaze of glory, defiant to the last, and poetically she dies the same way she killed Kanan.

And then there's the epilogue, we find out that the beardy Rebel in Return of the Jedi was indeed Rex, and that they all survived the Galactic Civil War, getting satisfying resolutions for the characters, followed by them teasing us with another final adventure to rescue Ezra, Ahsoka and Sabine, back on the road.

Low Points : While this is a very tidy finale, with no Deus Ex Machina coming out of nowhere (in fact the nearest to that, the Purgil, have actually been set up for 4 seasons), and no real hanging plots apart from Ezra and Thrawn's fates. I have to admit that it's not 100% satisfying, Ezra outsmarts Thrawn with something from so far in the past of the series that I'd totally forgotten it, rather than something which would have felt a little more earned. So it makes the finale feel a little empty, as while everything is neatly tied up, it's a little too planned and sterile, rather than having the emotional reward that I would have hoped for.

And my last low point of Rebels is: Jacen Syndulla. The Epilogue reveals that Hera and Kanan had a child named Jacen, so throughout the final 6 or so episodes, Hera's been pregnant (take that Padme, that's how you deal with loss, but don't die from "losing the will to live" during childbirth). But I have to ask how?
From everything we saw, Kanan and Hera finally got a moment to kiss tenderly just before she leaves Lothal with the Tie Defender flight recorder. They get moments between him rescuing her and his death when she returns to Lothal. We've definitely been led to believe their relationship has been a bit chaste, since they've been busy saving the galaxy. In fact Kanan berated Hera on a number of occasions about never thinking about the future, about their future. And now we're supposed to believe they were busy making a baby, but never had time for any discussions about their future. That their kiss and declaration of love for each other, was actually after they were having sex?
While it's a nice payoff for their relationship, that they loved each other and had a son together, it's not set up properly, and just comes out of nowhere.

So what do you really think ? : While I've got my criticisms of the finale, I honestly don't think it could have been done much better. As I've mentioned above on numerous occasions, the episode ties up almost every plot line. Really making Rebels as a whole a cohesive story, with all of the characters getting a tidy resolution.
While many of the minor characters don't get mentioned in the epilogue, it's easy to see that Vizago will prosper as a hero of Lothal, and Mart Mattin will return to the Rebel Alliance and take his part in the Galactic Civil War, as well as many others. But there is one character who I did want to find out what happened to him, Hondo Ohnaka. Did he return to piracy? Did he join the Rebellion? Did he retire to tell tall tales on Lothal (I could definitely see him as the new proprietor of Old Jho's bar). He's probably too old to take part in Resistance, so we may never hear of Hondo's fate, and I find that a sad thought.

Final Words : Well, that was Rebels.
Where Clone Wars just ended, and now has been brought back for a resolution, Rebels actually had an end, and that's it over. While we're teased with the prospect of one final adventure with Sabine and Ahsoka recovering Ezra from wherever he has ended up along with Thrawn, which would be great to see. I have a feeling that will be dealt with in books or comics rather than an animated movie (unless it turns out that's the whole point of the live action Star Wars television series "The Mandalorian", it'd be one hell of a twist if the title character was Sabine.

Well, that's me finished reviewing every episode of Rebels and Clone Wars. Resistance is still being made, and we've got new Clone Wars next year, with the Mandalorian and the Cassian Andor series to come. But for the moment, I'm done with Star Wars on TV.
So what next?
Well I've got plans for that.