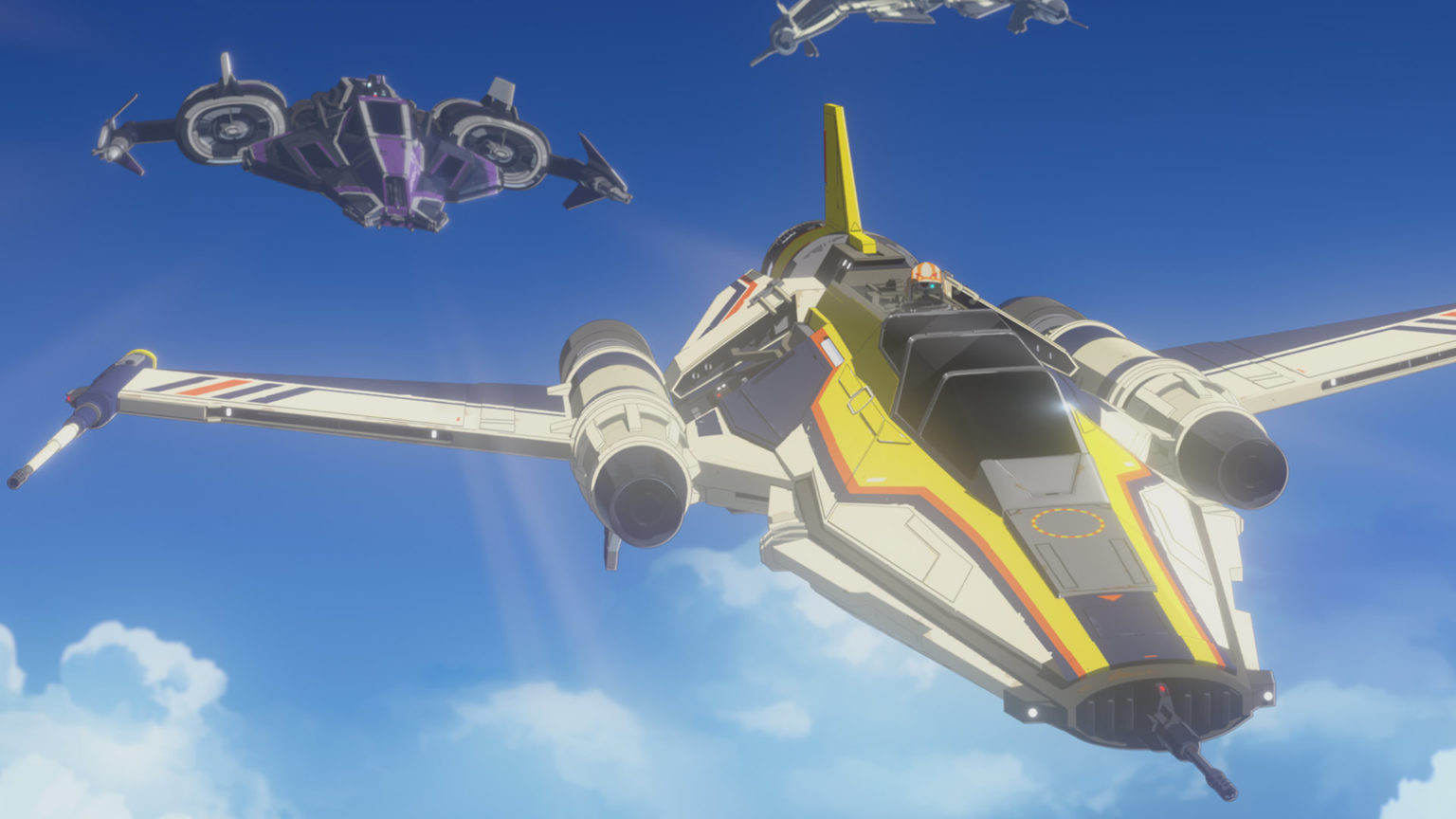 What is it ? : Yeager and the team are summoned to Commander Doza, who reveals that due to the station suffering financially he has arranged a special race to attract income to the station.
To raise interest he wants Yeager to come out of retirement, and offers a large prize, which doesn't interest him, so offers the chance to race against the Galaxy's most famous racer, Marcus Speedstar, but this interests Yeager even less, as he reveals that Marcus is his brother.
Returning to the garage Yeager refuses to reveal as why he won't race Speedstar, who enters asking Yeager to forgive him and race, but again Yeager refuses.
But when Tam and Kaz bait him by asking why he is afraid of racing, and telling him he doesn't stand a chance of winning against the famous racer, he marches to the cantina, telling them that his brother will chicken out of the race if Yeager actually challenges him, because Yeager was always the better racer.
It looks as if he was right as his brother begins to back out of the race, but after having his apologies thrown back in his face again, Speedstar accepts the challenge.
Yeager reveals to the team that he has a racer that he's never shown them, and lends Kaz to Speedstar as a mechanic after Speedstars is taken hostage by the Guavian Death Gang demanding money. As they fix Speedstars racer, he reveals to Kaz that Yeager won't forgive him for an accident he caused, when to win he filled his racer with Hyperfuel, which caused an explosion and some deaths.
In the race, the two continue to squabble over the comms, but Yeager is reliably ahead, with Speedstar just behind, being harrassed by Griff Halloran in his modified Tie Fighter Racer.
As they take part in part of the race where they climb to orbit, and their vessels are Ion pulsed to shut them down, allowing the vessels to fall from orbit without control but must hit a target ring to re-energise their engines before they crash into the sea. Griff rams Speedstars racer, but himself is forced off target and has to eject before he crashes.
Yeager and Speedstar race for the finishing line, and once again talk, with Speedstar apologising for the Hyperfuel explosion, which he reveals killed Yeagers wife and daughter. But Yeager thinks he hasn't changed, still just wanting the glory of winning, but Speedstar reveals that he is racing to raise the money to get his mechanic back from the Guavian Death Gang, so Yeager avoids the finishing ring, allowing Speedstar to win and get the prize money.
Speedstar claims the prize, pays off the gang, and before he leaves shakes hands with his brother, with Yeager telling him he doesn't forgive him, but perhaps now he will be able to.

High Points : The dialogue in Resistance is so terrible that I must highlight the one time that it's actually been really good, when Marcus Speedstar is revealed to be Yeagers brother, they ask why he has a different name. Yeager responds that "You thought Speedstar is a real name?", which I thought highlighted Star Wars habit of having ridiculous names.

The race is exciting and fast paced, and the concept of the unpowered dive is an interesting one, even if it doesn't seem to make that much of a difference, since the racers still have maneuvering thrusters and the Astromechs keep functioning, which seems a little unusual if the fighters are supposed to have been ionised.

Low Points : Firstly something which has been bothering me for a few episodes now, Neeku's face looks as if it has been splattered across the front of his helmet. Once I saw this, I found it distracting. The way his facial horns curve around the curve of his helmet, obscuring the edge of the helmet within his own face. It looks to me as if someone has taken a handful of Neeku face and thrown it at the helmet where it has splatted across the front. For all we can see the helmet is full faced, and Neeku's face isn't attached to the rest of him, as we've never seen him without the helmet.
I just had to bring it up because it was distracting me.

So, Marcus Speedstar caused an explosion through negligence and killed Yeagers Wife and Daughter? And Yeager begins to forgive him because he says he's sorry, and he pays a ransom for his mechanic after a gang kidnaps him as collateral on a loan Speedstar took out?
The size of his crime against Yeager, and the size of his redemption do not seem balanced. Yeager seems vindicated in thinking that his brother is reckless, and to tell the truth, his brother seems to have made only the most minimal change, as he's not racing to help someone else, just racing to pay off a debt someone else is suffering for.

So what do you really think ? : Resistance continues to be terrible, and the sad thing is they seem to have good ideas and just discard them. Apparently originally the Racer in this episode was to be Han Solo, and it would have been in character and very interesting to see Han having caused the death of Yeagers family through his characteristic recklessness, as well as providing some star power to the show. It annoyed me when Rebels used R2-D2 and C-3PO to provide a link in it's first episode, because Rebels hadn't had space to grow into it's own thing and the appearance was just too blatantly an attempt at hooking people in, but Resistance could really do with something to attract attention, especially the appearance of a hero as a semi-villain.
It would have also provided an interesting piece of history for Yeager, who we know served with the Rebellion, if he'd be connected to Han.
However the writers wanted someone more personal to Yeager, so we get his never before mentioned family murdering brother.

Final Words : I'm getting tired of being negative about Resistance, the elements are there, but the series doesn't seem to have any kind of handle on what it wants to be, putting the death of a characters wife and daughter amongst the pratfalls and childish jokes of the other characters, the tone is very odd, and instead of adding gravitas to the character (by having a tragic backstory), it just comes off as bizarre in tone and badly handled as these deaths are almost instantly forgiven for only the most minor of reasons.