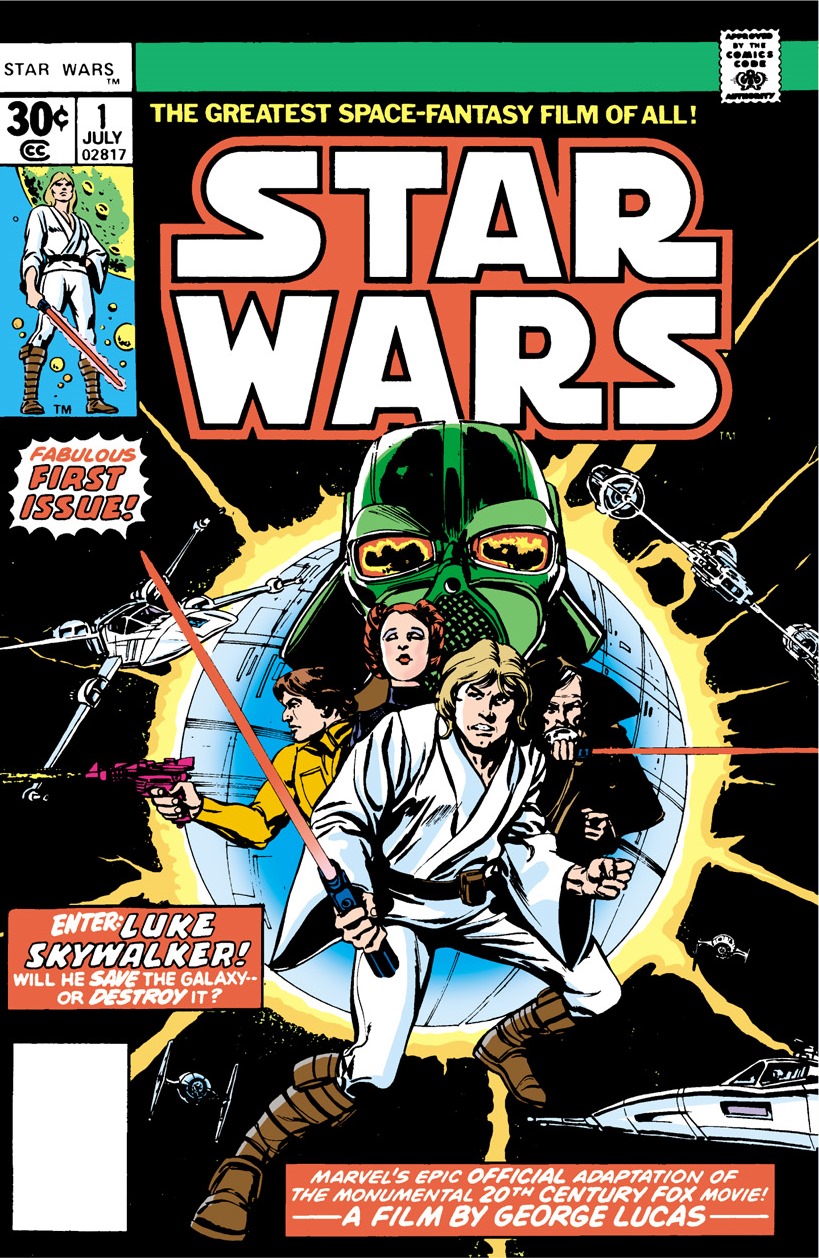 What is it ? : So we start reviewing the 1977 Marvel comics Star Wars series. These shaped my view of the Star Wars galaxy, and were the first stories told outside the movie of that Galaxy far far away.
Now, we'll be reviewing each issue seperately, except for the movies, since we don't really need to retell the story of the original trilogy. So the first 6 issues retell the Story of the first movie, now known as Star Wars Episode IV, A New Hope, but told here under the issue titles of "Star Wars 1", "Star Wars 2: Six Against the Galaxy", "Star Wars 3: Death Star!", "Star Wars 4: In Battle with Darth Vader", "Star Wars 5: Lo, The Moons of Yavin!" and "Star Wars 6: Is This the Final Chapter?".
Although we'll not retell the story, I think it's worth commenting on some of the text, and of the differences to the movie, so .. ..

The Cover of the very first issue states "Enter: Luke Skywalker! Will he save the galaxy.. or destroy it!", which doesn't really resemble anything in the movie at all.

The opening text (not done in the format of a Star Wars scroll at all, since this was released a month before the movie, so was written long in advance has some great publicity for the Empire, calling them "The Awesome Galactic Empire".

A couple of pages in, the descriptive text refers to Darth Vader as Dark Lord of the Sith, perhaps the first mention of it outside publicity for the movies.

Leia seems a little murdery, stating "I've set mine to kill" after Stormtroopers say their weapons are set to stun.

Because this is based on the original scripts for the movie rather than the final cut, we've got Biggs appearance on Tatooine (and later on Yavin IV) with Luke witnessing the space battle and reporting it to his friend who mentions he is about to join the Rebellion. Although it was cut from the movie for pacing, I think it works better here, fleshing out the galaxy a bit more.

We've got a secret meeting among Imperial Officers which doesn't feature in the movie, with them saying, "This Sith Lord sent by the Emperor will be our undoing". This isn't a scene I've ever seen anywhere else, but I have vague memories of the officers from the Death Star being used later on by the Comics, this does seem to at least build them as potential rivals to Vader.

The cover for issue to has Luke saying "Swing that Lightsabre Ben.. ..or we're finished!" in the Cantina fight.

We've got the scene with Jabba meeting Han in the hangar bay, but it's a Nimbanel version of Jabba, (also I must note that Hutt is spelt Hut throughout). This was later retconned to be Mosep Binneed, Jabba's accountant, who sometimes used his name. But Nimbanel Jabba made reappearances in the comic several times before his appearance as a massive slug was set in Return of the Jedi.

Han swears "By the Five fire rings of Fornax", which I'm not sure if it was in the original script or added by Marvel, but worthy of note.

For brother and sister Luke and Leia kiss.. ..a lot... passionately.

All of the Lightsabers throughout are Red, which gets a little confusing during the Obi-Wan, Darth Vader fight.

Speaking of which, there's a lot of extra dialogue added to the Obi-Wan, Vader fight, the most cringeworthy is "You...only know...half 'The Force' Vader....! You perceive it's full power... as little as a spoon... perceives the taste of food!", but some of it does ring true, with the Student Master relationship mentioned and Obi-Wan telling vader he has much to learn.

And at the end of the fight, rather than Obi Wan disappearing, he is totally incinerated by Vader's lightsaber.

Tie Fighters are really badly rendered in the comics, with them firing lasers out of their wings and often flying backwards.

On arrival at Yavin base, Leia is greeted by Commander Willard. This isn't a wrongly named General Dodonna, who is also named, but a totally different character we've not seen in the movie, and never see again (to my knowledge).

Issue six has Vader and Luke fighting with Light Sabers on the cover "Today you DIe Luke Skywalker! This is your Final Battle!", bearing no resemblance to the movie at all.

Upon detecting the X-Wing attack on the Death Star, Vader states, "This station is not designed to do battle with such puny insignificant space-craft... and that could be it's undoing.", dialogue I've not heard in any version of the movie, but which makes total sense.

Blue Six is identified as Lt Tono Porkins, but was renamed Jek Porkins, this was eventually retconned to Jek Tono Porkins., and after his death, Biggs says "So long Piggy.", which, as a rotund gentleman myself, feels pretty insulting.

When Luke hears Obi-Wans voice, he thinks, "Maybe he merged somehow, with "The Force"... and he's here with me in spirit.. right now!", rather than letting the reader come to that conclusion themselves.

As Vader chases down Luke in the trench, the comic tells us, "His Jedi-born instincts tell him that the great battle station he serves is only seconds away from being able to destroy the Rebel fortress on Yavin 4... and no mere pair of upstarts must be allowed to stop the Imperial Juggernaut.".

The writers spotted Chewbacca's omission from getting a medal at the end of the movie, telling us, "Chewbacca the Wookiee, too, will have his own medal... but he with have to put it on himself. Few Space Princesses are that tall.". Which at least tells us that Chewie gets a medal, but doesn't make a whole load of sense, since Chewbacca could easily bend down, or just stand on a lower step of the dias that Leia is waiting on.

High Points : Well, it's a strong start, retelling the original movie from the original script, before final editing. So we get a lot of content unseen in the movie, and we get different takes on dialogue we've not heard before.
The telling is pretty accurate, although the quality of art varies throughout. Sometimes it's excellent, the portrayals of Alec Guiness as Obi-Wan sometimes are very good, and sometimes not so good, the covers portray Vader extremely strangely, and Chewbacca often just looks like an escaped Gorilla.


Low Points : Difficult to criticize too much, it's Star Wars, the story is good, the retelling is alright, and I'd rather have an alright retelling of Star Wars, than many other stories any day.

So what do you really think ? : Well, it's a fascinating look back to the early days of Star Wars. We get lots of cut content, and the comics provide a glimpse into a Directors Cut long before such things existed, many of the scenes we see here would make a reappearance in the Special Edition of the movie, but there's still loads we still have never seen.
The dialogue is classic Marvel in many ways, with superlative adjectives sprinkled generously through the text such as the before mentioned, "Awesome Galactic Empire". It's a little much, and provides much hilarity throughout, taking tension out of the story where it's supposed to be action packed.

Final Words : Well, in some ways this is Star Wars as it formed in my head, Nimbanel Jabba especially is the one I remember, and just seems somehow more correct than the movie version to me, as it was the one I was aware of for some 5 years before Return of the Jedi.
It's also hilariously bad in places, but that doesn't take away from the charm. If you read it, don't expect amazingly accurate storytelling, expect overblown action and text as you'd expect of a superhero story publisher such as Marvel.
Excelsior.