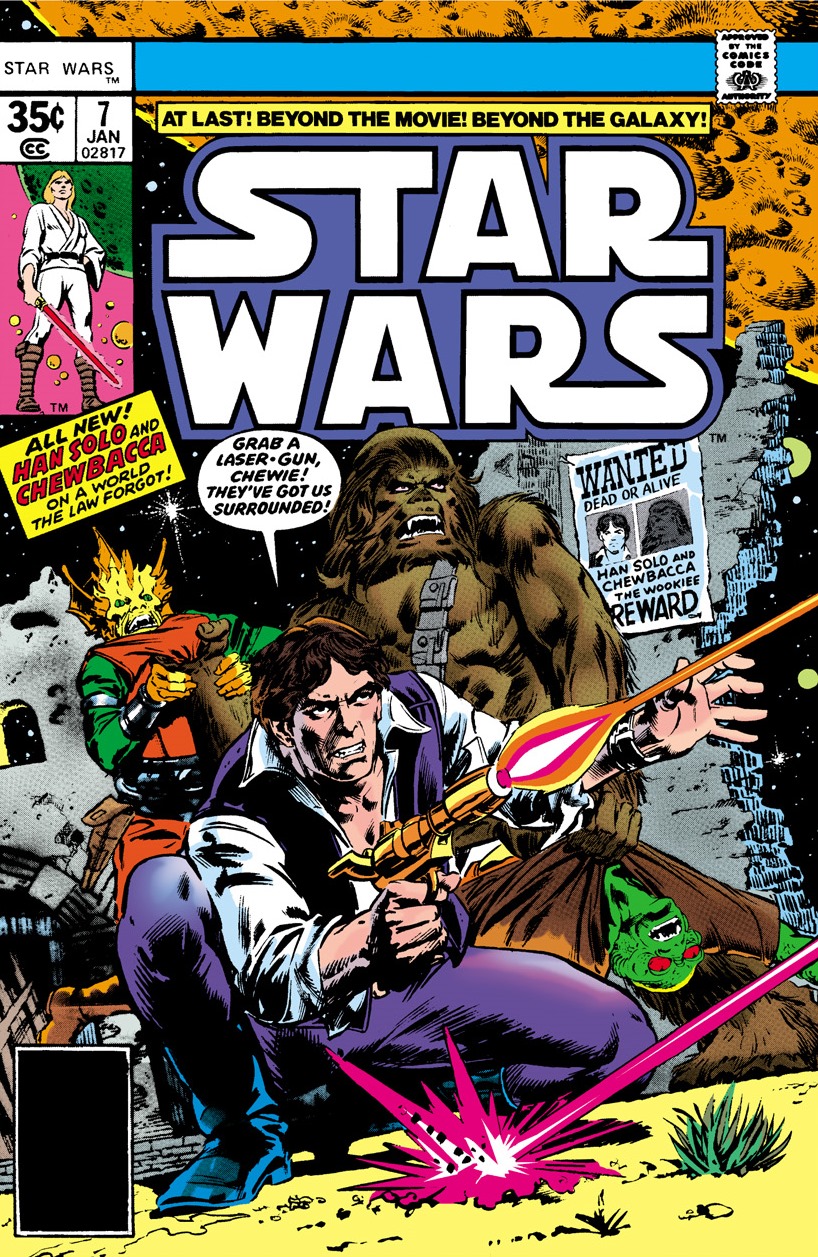 What is it ? : So, by issue 7 the comic has completed the story of the original Star Wars movie (long before it was ever called Episode 4: A New Hope), and the stories continue. Nowadays we've seen attempts to continue the plots all authorised by George Lucas, Shadows of the Empire for example was a "Multimedia" attempts at Episode 5.5, set between Empire and Jedi, and I remember having a conversation with the author of the first of the New Jedi Order Novels, about being in George Lucas's office and having ideas handed to him, along with being told what we was and wasn't to do (for example, he was to kill Chewbacca).
But the Marvel Star Wars comics had none of that, they simply wrote up ideas and sent them off to Lucasfilms LIcencing Department, which apparently at the time just consisted of one woman for authorisation.
This meant that the stories aren't consistent with anything else in the expanded universe, and really went off in their own direction.

But anyway, we pick up almost straight away after the end of A New Hope, and Han and Chewie are preparing to depart the Rebel base on Yavin. The Rebels are starting to evacuate, being aware as soon as Vader makes it back to the Empire, an attack on the base will be coming. However, Han and Chewie have bigger personal problems to deal with, a price on their head from Jabba the Hut (still only 1 t), so they take their reward and leave.
They have a distance to travel before they can engage Hyperdrive, so they travel past various sites (probably because at first they mention heading for Dantooine, but get their destination of Tatooine right in the very next frame), when they come under attack from what looks like a Star Destroyer, but the heroes recognise as not being an Imperial Ship, which launches numerous fighters at them.
They are boarded, and the Pirate Crimson Jack (who Han called Redbeard) and his sidekick Jolli who wants to kill them, Crimson Jack however just wants their cargo, the reward from the Rebellion, and to set them free so he can possibly raid them again in the future.
Now without any way of paying Jabba, Han and Chewie take the Falcon to the rim worlds, where perhaps his reach won't stretch, landing on the near forgotten world of Aduba-3.
Heading into town to see if they can find work, they find the locals attacking a Verpine Priest who is taking a coffin to the local cemetery. Getting involved in protecting the priest, they discover that the person in the coffin is a cyborg spacer, but the locals don't want someone who is mainly machine buried there. The heroes fight their way through to the cemetery though, although Chewbacca has to carry the coffin the final stretch after the Bantha pulling it is killed, and they aid the Verpine Priest with the burial.
Once they are finished, the Verpine gives them a purse of coins for their help, and they head to a local bar, where they find they are forgiven for the fighting outside because they fought fair, the pair hook up with some girls, but as Han leaves with his, he is confronted with three humans with a proposal for them.

High Points : Well, there's not a huge amount to go on here (it's only 20 pages long), but it is imaginative and a look into a variant Star Wars universe. We've got some interesting aliens and background going on here, because Marvels writers and artists have always had amazing skill and imaginations.

One element I really liked was the pirates using stolen Imperial hardware and equipment in their attack, from the cruiser they use, to one of the soldiers wearing stormtrooper armour.


Low Points : I'll get it over with here, and then we'll not mention it every review from now on. But this doesn't match up with any content which comes afterwards, including the movies. But lets remember, this came first, so perhaps that is a flaw with everything else rather than a flaw in these comics. It's definitely got it's own tone, with more fights, and less repercussions than we're used to.
But it does show some sensible consideration of the effects of the movie (Vader escaped, so the Empire will learn the location of the Rebel base and send forces, so the Rebels much evacuate), and rather interestingly, rather than force all of the characters to be involved in all the stories together, it takes them off to have their own adventures, rather sensibly having Han and Chewie back out in the galaxy away from the Rebellion.

I must however again bring attention to the fact that they mistakenly say they're going to Dantooine to pay Jabba, then correct it to Tatooine in the very next panel, some proofreading required there. They also make out that the Wookiees are a savage culture, where "violence is such an everyday occurrence they have fifteen words for it", which is a definite different take on Wookiees than usual (and to be honest, don't we have loads of words for violence too).

It's also worth pointing out the strange clothing of Crimson Jack, while I'm not saying that different cultures might having completely different styles of clothing, but a large ginger bearded man wearing what basically looks like a woman's swimsuit with added shoulderpads, is a little bizzare to my western sensibilities.

So what do you really think ? : It's interesting, but extremely dated and a little comical now, but I'm really enjoying dipping back into these stories after around 40 years.
The second part of the issue is far better than the first, getting them robbed so they can't pay off Jabba is necessary, but I think I'd rather of had Han lose the money on a scheme, than just "Space Pirates" it away. But a glimpse of an Alien world, with a strange burial problem, interesting aliens, and a Cyborg in a weird glass coffin, really piqued my interest and I wanted to see more.

Final Words : It's perhaps nostalgia speaking, but these are pretty good, if totally off the wall weird, and we're onto the story that I adored as a child, introducing my Favorite character from the comics, Jaxxon.