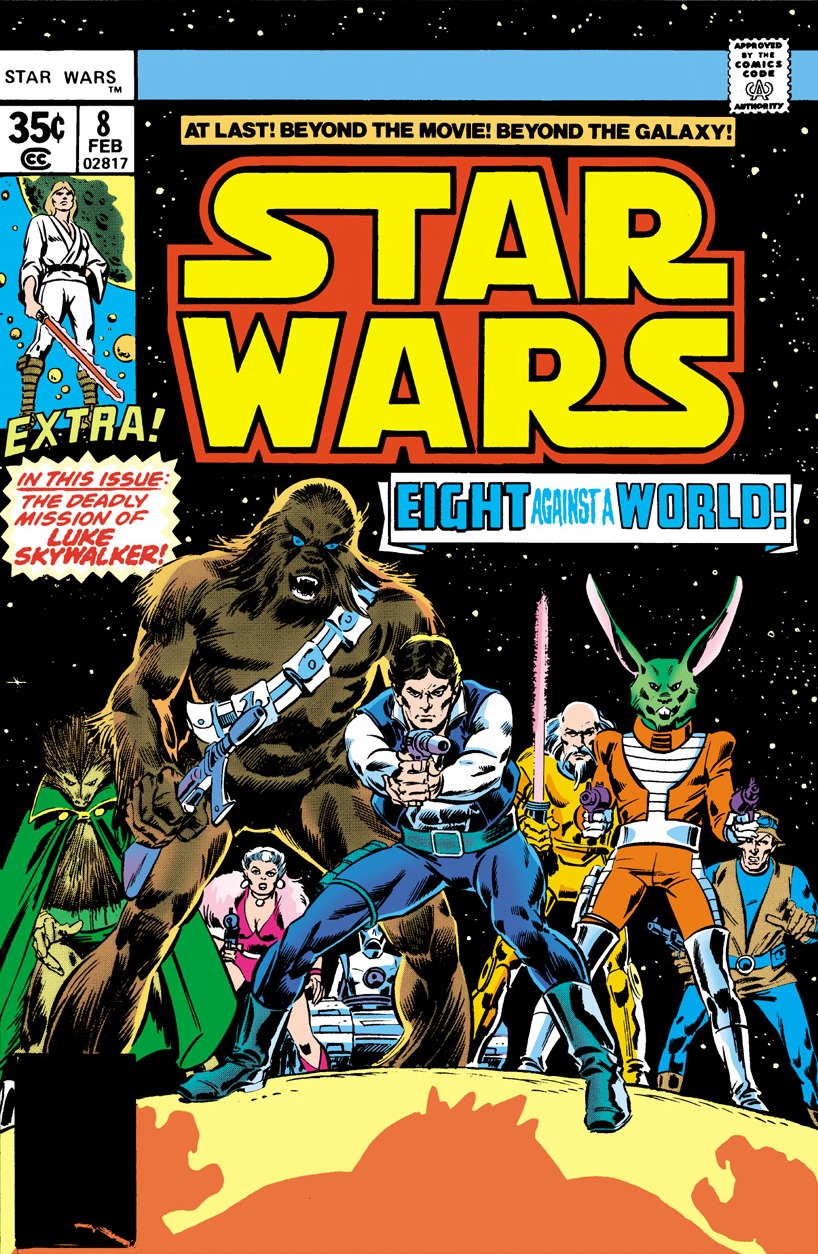 What is it ? : So, Han and Chewbacca are in the Cantina from the end of the last issue, and they've been confronted by three humans with a proposal for them. However at the end of the last issue they were stereotypical oriental monk types, but now they are europeans, and the central figure who is doing the talking is wearing an outfit similar to Luke's Tatooine outfit, complete with the Hat he wore in the cut scenes from A New Hope.
However, before they can speak, Han is confronted by an Alien who is bothered that Han was leaving with his girlfriend, insults are thrown, with Han insulting a large apelike Alien, which turns out to be the girlfriend of yet another alien, and a barroom brawl breaks out, which is only ended after Chewbacca arrives and breaks it up by throwing the aggressors out of the window.
Speaking to the 3 people who arrives, the are told they come from a poor village which is being raided by the Cloud-Riders led by Serji-X Arrogantus, and they wish to hire some muscle to protect them (ala the Seven Samurai or The Magnificent 7), Han agrees, and puts out word he's looking for muscle to hire to protect the village.
He interviews a group, and ends up hiring Hedji, a Spiner, which can fire his porcupine like quills into targets. Amaiza, a former Black Hole Gang member former colleague of his and a gunslinger. Jaxxon, a Lepus, a six foot carnivorous Rabbit. Don-Wan Kihotay, who believes himself last of the Jedi. Jimm Doshun, a farm boy who reminds him of Luke, but has no real combat experience, and Jimm's droid, FE9Q, who is called Effie, and is a tracked agricultural droid.
While Han talks to Jimm, he wonders what Luke is doing now, and the story cuts to Luke preparing to leave Yavin 4 in a transport ship with R2 and C-3PO, to search for a new location for the base's relocation. He says goodbye to General Dodonna and Princess Leia, and as he flies off he thinks over the events of Star Wars, the loss of Obi-Wan, and wonders what Han is up to.
Han and his gang, now called the Star Hoppers of Aduba 3, set off for the village, but are confronted by Serji-X Arrogantus who tries to talk them out of protecting the village, but after they refuse, he mocks the group when Han can barely keep them under control, and leaves threatening them.

High Points : It's great to see how the Marvel comics effected the Star Wars universe, with the Quixotic Jedi of the Star Wars RPG rule book being obviously based on Don-Wan Kinotay, and the tradition of Aliens basically being an earth animal in human form (Wookiees being Dog People) is taken to further extremes with the Lepus (Rabbit People), and the Spiners (Porcupine People).

They're also off to a solid start by ripping off a classic movie (The Magnificent Seven (itself a rip off of The Seven Samurai)), with a grizzled group of gunmen and wannabe heroes setting off to protect a village from a gang. Hell, Serji-X Arrogantus even wears spurs to make the point even more obvious (not sure how that helps him pilot his Speeder Bike).

It's also amusing during the barroom brawl section of the story to see the scaled alien aggressor repeatedly hitting Chewbacca, who is so unaffected he just stands there, until the Alien accuses him of being so stupid to not notice the hits, upon which Chewbacca casually tosses him out of the window.

Low Points : Well, the complete change of the three villagers hiring Han at the start of the issue is a bit of an annoyance. But there's nothing else serious to really criticize in the story.
While I can comment on most of the females in the story all wearing nothing more than swimsuits, and the peculiarity of Han interviewing his gang all the while shirtless. These are just strange choices and not massive problems.

In my write up above, I've totally failed to mention the recurrence of one character throughout the issue. The alien Han fights in the Cantina, returns twice, firstly attempting to muscle his way into Han's gang, but he makes the mistake of insulting Jaxxon who uses his powerful rabbit legs to kick him. And Secondly, having then gone and sold the group out to Serji-X Arrogantus, and showing up as part of his gang. I'll be interested to see if this scaled alien turns up again, and whether there's any real continuity between issues beyond the basic plot.

Final Words : Well, this is obviously just the start of a storyline, so we'll see how it works out. But if they're stealing storylines from old Japanese movies like the Seven Samurai, perhaps they'd consider doing The Hidden Fortress . . . . . oh!